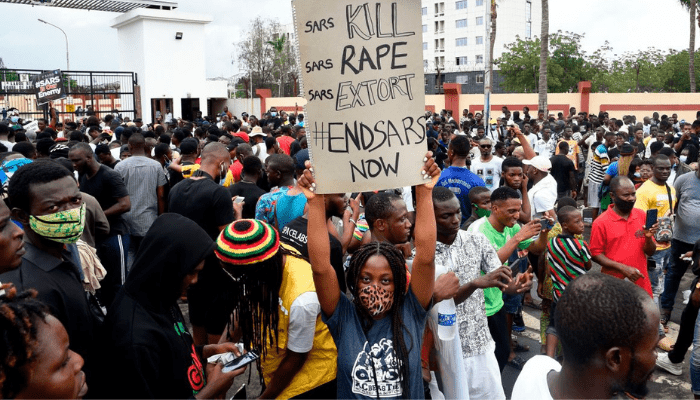 One of my professors at Oxford, an astute economist, engaged our class about his experience on the ground at the start of the Tunisian revolution. He said, “I remember in the summer of 2010 when my wife visited me in Tunis, she remarked about the number of young men in the streets. ‘What are they doing?’ she asked. I was not alarmed because they had gathered gradually over the last few months and I had not initially thought it drastic to see groups of 3 or 4 young people at every corner talking and loitering about. She had, however, called this out as an undeniable mark of imminent revolt.” My professor’s wife was right! Throughout history, most revolutions have been driven by young people with not enough work to do, in countries with leaders that do not adequately invest in curbing their idleness.

In Nigeria, we are seeing emergent signs of our own revolution and for many, it feels like a long-overdue spring. At the crux of what is brewing, are questions of injustice, brutality and poor governance. Yet wrapped within it, is an immovable question about unemployment. While Tunisia’s unemployment rate in 2010 was around 15%, its youth unemployment numbers were over 3x larger. In Nigeria, over 67% of the unemployed are young people- a group with energy and hope that will have to be channelled, one way or another.
As our country’s unemployment rate has tripled in the last five years according to a Quartz Africa article https://qz.com/africa/1892237/nigerias-unemployment-rate-tripled-in-five-years, we have been steadily marching toward revolt. I had remarked in an earlier edition and still believe that the fundamental purpose and true essence of work is “value creation”. Where individuals are hindered from creating value formally, there are few options but to do so informally. Social movements like the recent #EndSARS protest is one such example of informal value creation that also demonstrates how such efforts can sometimes be at loggerheads with formal value creation. Protests and social movements that are created to improve society in the long term often come with short term losses when they ground activities like transportation, commerce and education. Though disruptive, these losses represent smaller sacrifices. For many, the #EndSARS effort has resulted in the much greater sacrifice of losing their lives.

On Tuesday this week, some young Nigerians paid this ultimate sacrifice in an effort to create value. Even amidst the subsequent chaos, the value these protestors succeeded in creating is undeniable. Firstly, the movement invigorated a belief amongst young Nigerians that organizing and social mobilization can force the hand of government. If well leveraged, this realization could mean the beginning of improved civic engagement and governance. Secondly, the movement has brought to the forefront the power of social media, cyber warfare and international and domestic forms of grassroots resource mobilization, as modern tactics to change society. #EndSars has come with the publication of phone numbers of the political elite, birthing the first wave of organized phone call activism that Nigeria has ever seen.

Leveraging social media, millions of naira have been raised across traditional and cryptocurrency payment platforms https://nairametrics.com/2020/10/12/endsars-nigerian-firms-start-ups-donate-millions-in-support-of-protests/ and the money has been used to provide security and amenities for protestors. Nigerians at home and abroad have ensured that the End SARS hashtag remained trending and visible. So visible that, despite deliberate efforts to turn off billboard signs and lights one could still access live mobile streams of killings on October 20th, horrifically displayed for the world to see and remember. The large-scale public witnessing of these shootings on social media in the face of growing disinformation campaigns is a uniquely important galvanizing factor for many groups of Nigerians at home and abroad. Churches, hospitals and individuals opened their doors to protestors and collective action behind an idea was further fueled.

The final value creation of the protestors is the exposition of the unsolved poverty and associated unemployment challenge. This exposition is not unlike the value created in the Arab Spring in Tunisia. It was the frustration of joblessness, police oppression and the helplessness of being bullied by his own state, that led Mohamed Bouazizi to set himself alight in protest in 2010. This week, with the Lekki tollgate alight and many other parts of the country in flames, the third work of protestors is evident. They have illuminated a problem of unemployment that requires systematic and deliberate redress. If the protest is the birthplace of social change, we must now ask what happens after birth- we must begin to raise the child of this valiant effort. In a place like Nigeria, where hunger, insecurity and injustice prevail for most people, employment, or indeed the lack of it, is the next battleground.

Employment for young people is recognized as critical by economists and laymen alike for obvious reasons. A job provides money, which is the means for the purchase of other goods, services and experiences that keep us alive, connect us with others and stimulate economic growth. The high unemployment rate in Nigeria has made it very difficult for young people to live dignified lives and has contributed to Nigeria being awarded the title of poverty capital of the world, overtaking India in June 2018 according to the World Poverty Clock https://www.google.co.uk/amp/s/www.brookings.edu/blog/future-development/2018/12/13/rethinking-global-poverty-reduction-in-2019/amp/. Yet what compounds this issue is the fact that the Nigerians who have found work are forced to share the spoils of their labour with a kleptocratic state. SARS is not unlike the many Nigerian agencies that tax individuals for services rendered. Only that they have guns, face no accountability for misconduct and rarely render services.
Beyond the financial gains of employment – the sense of purpose and identity that comes from value creation is immense, and protestors have found this value in comradery with one another. This cohesive value ordinarily also serves the state. When individuals are working and earning dignified salaries, achieving milestones and improving the organizations and societies they work in, they are less likely to agitate the state.

Michael Moore, an American social and political critic, cleverly discusses the ploy of student debt, mortgages and other financial goods to deter young Americans from activism because it makes them dependent on stable and steady incomes that are not easily compatible with activism and protest. For the average Nigerian, these ties to the state are few and far between, as individuals are forced to provide most goods for themselves. For many Nigerians, a loan is more likely to come from a collective saving and lending system amongst friends and family like table banking http://www.ipsnews.net/2018/10/kenyan-women-turning-tables-traditional-banking-land-ownership/, than a formal financial institution or the state. This dissociation from the state does not serve the people or the government and compounds the already precarious employment challenge by making it harder for individuals to earn a living.
If employment is the next battleground, then investment in a new type of armour is key. As young people have called for the end of SARS as early as 2016, what will make the difference in this wave is the extent to which this movement can mature to insist on answers to key issues on the youth agenda. Front and centre must be the issue of solving both the supply and demand sides of the unemployment problem. The armour for this next battle is a macro-economic policy that stimulates job creation in spaces like technology, industrialization and other non-oil sectors outside of the state as a traditional employer.

The armour is also educational reform with a lens toward work-readiness, job-placement, matching, entrepreneurship and career development support. As we recognize the amount of value young Nigerians can contribute, we will begin to see these investments not as a burden but as a necessary input to producing a better future for our nation. Over time we will come to realize that the Business of Employment must surely grow.
Until then or sooner, stay safe
With gratitude,
Viv

Bio
Vivian Ojo is the founder of the Write Writing Coach www.thewritewritingcoach.com, an organization that supports individuals with professional writing. She has consulted with some of the largest international development, educational and corporate organizations across the world and with several African Governments focusing on people and capability building. She has worked on business strategy and job placements with McKinsey and Company, MasterCard Foundation, and the African Leadership Academy. She is a board member of United World Colleges Nigeria and a member of Umsizi Fund’s peer learning network that convenes over 30 employment placement organizations from around the world including Harambee, Generation, and Education for Employment. She has a longstanding passion for transforming the African education to employment landscape. She has done work on this as part of her master’s in public policy from Oxford University, an undergraduate degree in international relations and development from Georgetown’s School of foreign service and has been published on the education to employment topic in the Harvard Africa Policy Journal among others.

Sizing up an entrepreneurial opportunity