When desperation turns into self-discovery-A Review of Lizzie Damilola Blackburn’s Yinka, Where Is Your Huzband? 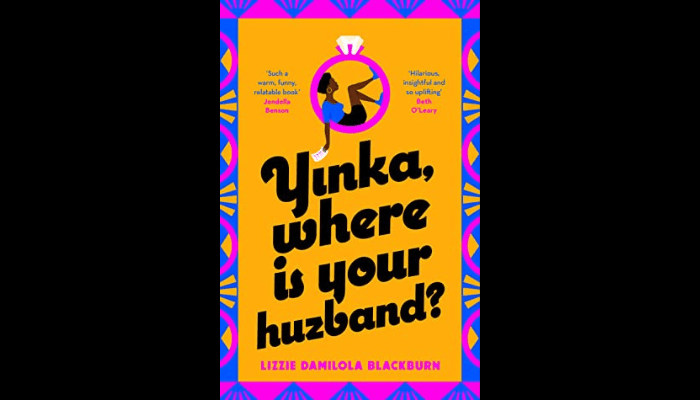 Title: Yinka, Where Is Your Huzband?

A lot of people seem to be talking about ‘Yinka, Where Is Your Huzband?’ written by Lizzie Damilola Blackburn. Given how intriguing the title is, you may have come across it.

Not only does the blurb sound exciting, but it also raises the reader’s expectations by implying that the novel will have suspenseful elements on par with those found in a Nollywood film.

Set in London, ‘Yinka, Where Is Your Huzband?’ follows the lives of the title character, a British Nigerian woman in her thirties named Yinka, and her slew of men, friends, cousins, mother, and aunties.

Prayer is the first thing that Yinka’s mother and aunts do for her when she starts the process of looking for a husband. This book is not an exception to the rule that every time the subject of African mother and aunties is brought up in a conversation, laughter is almost always guaranteed, and it is safe to say that readers will find a good deal of laughter in its pages.

The antics of Yinka’s mum and aunts will provide some much needed laughs. The other side of this is Yinka’s mother and aunt’s persistent pleading with her to find a husband, will make some readers cringe.

These mentalities and ways of behaving will be familiar to readers of African descent. Readers who are not familiar with Africans may get the impression that the antics that Yinka’s mother and aunties partake in are exaggerated.

Read also: Your period and everything you thought you knew &#8211; A Review of Perfecta Osawaru’s Flow Freely

When they finally found a boyfriend that Yinka could be happy with, the tensions in the household reached explosive levels.
Although, Yinka is certain that she has found the man of her dreams in Alex, a good guy who is also liked by Yinka’s mother and aunt, Yinka’s friend, Nana, is on the fence about whether or not Alex is the right guy for Yinka.

The constant flirting between Yinka and Alex may wear readers out. Despite this, Yinka is on the lookout for a boyfriend to accompany her to her cousin’s wedding so that she may prove to her relatives that she is not a waste of their time and is, in fact, making the most of her life.

Similar to her love life, Yinka’s professional life has been a complete disaster. Yinka struggles with deciding between pursuing an investment banking job and following her heart. Voicemails, texts, and emails are just a few of the several storytelling strategies that Blackburn uses to convey the story.

You might find yourself enthralled by the girl drama that is taking place between Yinka and Ola, who are cousins. As can be seen, the rivalry between the cousins was just as intense as that between siblings.

There was, however, a noticeable lack of focus on the male members of Yinka’s family. Her mother had been a widow for quite some time, but she rarely brought up her husband or their past together. No matter how you slice it, this raises the question of whether or not Yinka’s formative years were negatively impacted by an event or events.

It’s possible that Yinka’s mum will become the story’s most cherished character, but it’s also possible that she won’t.
The chapters are brief and straightforward, and you might even pick a new word or two (like “aromantic”) from reading it.

This book is not only a pleasure to read; it is also a profound exploration of some of the most pressing issues confronting modern black women in areas such as self-love, relationships, family, faith, career, societal pressures, and more. However, Blackburn should have known better than to rely on stereotypes when depicting black women.

There aren’t any earth-shattering revelations in this book, but there are plenty of valuable life lessons to be found. The fact that the book’s plot twists are easy to guess is one of its many flaws.

Titilade Oyemade is a business executive in a leading organisation and holds a degree in Russian Language. She’s the convener of the Hangoutwithtee Ladies Event and the publisher of Hangoutwithtee magazine. She spends her weekends attending women conferences, events and book readings. She loves to have fun and to help other women have the same in their lives. Email: titi.oyemade@gmail.com Social: @tiipreeofficial

Because of his grace, we are able to do good -A Review of Crystal Cummings’s Keys to…