MV Aureol: The White Swan Of The Lagos Sea

The MV Aureol was a unique and remarkable vessel in the maritime history of Nigeria. My interest in her was sparked by a story I was told by my friend’s father, about how as an adventurous teenager, he stowed away in her hold with dreams of making a new life for himself in Britain. Fortunately for us, he was discovered at the port of Takoradi; and like the other pieces of cargo, was discharged for onward transportation to his initial exit port.

The Aureol nicknamed the “White Swan” was the largest member of the Elder Dempster Lines West Africa Services fleet. Named after a mountain in Sierra Leone, she made the fortnightly passage from the port of Apapa to Britain, calling at Takoradi, Freetown, Las Palmas and Liverpool (later Southampton). In March 1949, Elder Dempster Lines placed an order with Steven and Sons Ltd to construct what would be their third and final passenger vessel (the other two being Apapa and Accra). She departed Liverpool on her maiden voyage on the third of November, 1951 under the command of Captain J.J. Smith with a full complement of passengers and a crew of 145. The crew was a mix of African and British seamen, with Africans generally below deck, whilst the roles ranging from the catering staff and above were the preserve of British and Irish nationals. 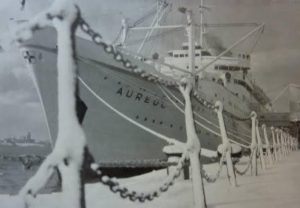 The passengers were segregated, not by the incidence of race, but by status and expedience. The first class cabins were dominated by expatriates and well to do Africans. Cabin class tended to be the preserve of missionaries and Nigerian traders taking advantage of the generous baggage allowances afforded them and deck passengers who were picked up along the West African coast between Freetown and Lagos, were accommodated in the steerage area.

By the mid 1960s the profitability of the West Africa passenger service was greatly impacted by the growth of the aviation industry and rising maintenance costs; forcing Elder Dempster Lines to re-strategize. In 1968 the Aureol was converted to a single class liner and was marketed as a cruise ship offering a 30 day voyage to West Africa. Said voyage included a stay of 7 days at the Continental Hotel at Accra and 5 days at the Ikoyi Hotel at Lagos. Unfortunately, West Africa had lost its appeal as a holiday destination amongst pleasure seekers. On 16th of March 1972 the Aureol made the final West African passenger voyage sailing out of Liverpool, as a sign of the times she was replaced by an express cargo service. 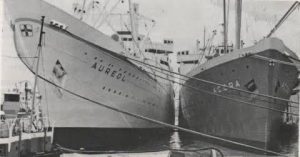 Following this voyage she began operating out of Southampton and was sadly laid up on the 21st of October 1974; following the completion of over 200 voyages to the West African coast; bringing an end to a passenger service that began in the 1860s.

I am pleased to say that the good lady still had some life in her. She was sold to the Greek oil tycoon Mr. John Lastis, sailed using her own engines to the port of Piraeus in Greece for a full refit and renamed `Mariana VI`. Following her refit, she sailed to Jeddah in Saudi Arabia, whilst at Jeddah, she played host to many special guests including former United States Secretary of State Henry Kissinger and a great number of diplomats drawn to her new luxurious cabins.

In 1979 she was once more was overhauled and refitted, only this time to serve as an office at Rabigh for nine years. Following her stint at Rabigh, she sailed once more; powered by her original engines to Piraeus where she was sadly laid up until the year 2001 when she was sold to ship breakers to be scrapped.

On her final voyage, the now old lady would not be denied her final hurrah. In March of 2001, her engines were warmed, her anchor heaved up and not to be undone, she was underway; via the Suez Canal to India. Powered by the very engine that propelled her on her maiden voyage to Apapa.

MV Aureol: The White Swan Of The Lagos Sea

She was broken up, sold as scrap and the curtain was drawn on the life of the MV Aureol; the largest and last passenger vessel in her fleet. The final liner to sail to West Africa from the port of Liverpool and the White Swan of the Lagos Sea.

She remains a footnote in our history. 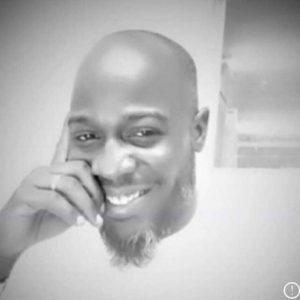 Imasuan is lawyer, writer a member of the Nigerian history group.

The prosumer as a new market force

Hopeful for change, Tari Taylaur dared to head for the polls

Who needs the Olympics anyway?

Public Finance and the Good Life

Are you reading or are you existing?