Meet P.Priime: From Sarz Academy to Carpe Diem to V 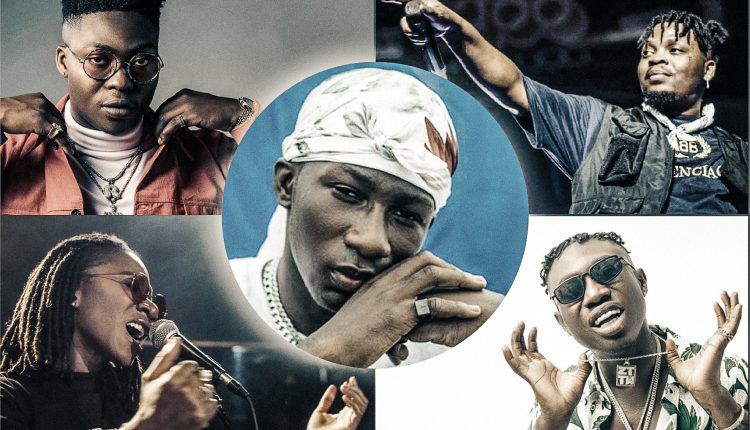 When you google ‘top Afrobeats producers of 2021,’ you’ll almost certainly find ‘P.Priime’ at the top of the list or somewhere close to the peak of the listings depending on the website’s author.

In a competitive and fickle industry, BusinessDay examines how a Sarz Academy graduate becomes the guy everyone wants on their team.

Peace Emmanuel Oredope popularly known as P.Priime may be young but has made himself one of the most sorts after music producers in the realm of Afrobeats and with his works on top streamed songs on streaming chart listings 2021, he might as well be one of the major players in the Nigerian music industry taking Afrobeats to the world.

Growing up in a family that appreciates and immerse themselves in music, Oredope attended an Anglican church and with most of his siblings being choristers, he started playing the drums at the age of four and moved on to mastering the piano at eight years.

After high school, while waiting to get admitted to the university, Oredope developed an interest in DJing and began experimenting with production software on his laptop, figuring he was making sounds not realizing it was the start of something big.

After seeing a post on Instagram about a music production academy, by Osabuohien Osaretin, popularly known as Sarz one who Priime tells BusinessDay is like an ‘industry Dad’, he was reluctant to apply because at the time he felt there were so many producers that were more creative and would easily get picked before his mediocre’ beats would be considered.

That wasn’t the case, as he was chosen to attend the academy for a month, which he described as a “fun, informative, eye-opening” activity that allowed him to connect with like-minded people who had helped him along his path.

Priime described Sarz as a father figure who he looks to for help on anything related to the music industry in general when speaking with BusinessDay about his influence on his career.

The academy opened doors to connect with people like Zlatan Ibile creating beats for songs like ‘Unripe pawpaw’ and the viral ‘Egungun Be Careful’ before working on his ‘Resan’ album in 2021.

The 20 years old over the past couple of years have put himself at the vanguard of current sounds brewing underground in Nigeria according to Pan African Music.

He has collaborated with artists such as Olamide in recent years, creating the majority of the tracks on his Carpe Diem album. Priime hailed the collaboration with Olamide, one of the biggest stars in Nigerian music, as a “dream come true.”

P.Priime was able to send his beats to the Nigerian rapper through his manager, and the rest, as they say, is history as they collaborated on his eleventh studio album Carpe Diem in 2020, an album that surpassed 500 million streams in mid-2021 and was ranked among the top 10 albums that made commercial waves in 2021 by BusinessDay.

Priime has produced songs for Teni’s WONDALAND album, produced Anoti on Wizkid’s Made in Lagos album, and produced the beats for one of the most popular songs of 2021, ‘Ozumba Mbadiwe,’ to which he attributes his success to the positive reception it received from fans.

On February 25, 2022, Asa released V, a cryptically titled album that marked a stylistic shift from her contemporary jazz genre to a more mainstream type of Afro-Pop music, an album that many critics regarded as an evident indication of a change in style, lyrics, and technical sound. Based on his prior work, this album is a testament to what P.Priime can do with an album.

P. Priime told BusinessDay that working with Asa was easy as both of them bonded well as they both desired the same result which was to make good music while exploring new sounds.

“Asa is someone who enjoys experimenting with new sounds, and she not only allowed me the freedom to be myself, but she also showed me a path I didn’t think I could take,”

He claims that the vocalist elevates the music to a new level, bringing out the best in each other while having fun composing beats and creating a terrific record.

The Nigerian music industry only recently started putting a closer look on the welfare of producers who have long been afflicted with The lack of proper credit, royalties, and poor compensation

In an interview, Sarz revealed that he founded the academy not only for music but also for producers to gain a holistic view of the business of the industry.

“The Academy isn’t really just about music production, we also deal with the music business and the legal aspects as well, so any producer that comes out of the Academy is well rounded and you have like an attorney assigned to you moving forward so you don’t sign slave contracts and anything you don’t understand,” said Osaretin.

While there is a defined reward system for producers and songwriters in other places like the US and UK, this has not been the case for most Nigerian music producers. They may need to hire a manager or lawyer who is familiar with the music industry to keep an eye on the method by which they are compensated after collaborating with artists.

P.Priime also told BusinessDay that his manager is in charge of all of his enterprises, which he trusts to get him adequately compensated in terms of streaming revenue, intellectual property, project collaborations, brand development, and marketing.

When asked about building a business around music production and how producers can get sponsorships compared to musicians, Oredope told BuisnessDay that artists and producers see each other as equals and should get the same recognition and opportunities to deals.

He also pointed out that some producers are getting the same deals as some top artists and sometimes more.

“I’m not just a music producer; it’s not like one person is better than the other. Whatever deals musicians get, you can bet I’m getting double.”

From Sarz Academy to Zlatan, Olamide, Wizkid, Teni, Wizkid, Reekado Banks, ending the year with Portable’s ‘Zazoo Zehh’ and Asa’s ‘V’, P.Priime has made himself a brand everyone wants to work with, as we expect more sounds in 2022.

“My favourite body of work at the moment has to be Asa’s album, it’s on a whole new level. Expect surprises from P.Priime in 2022,” P. Priime said.