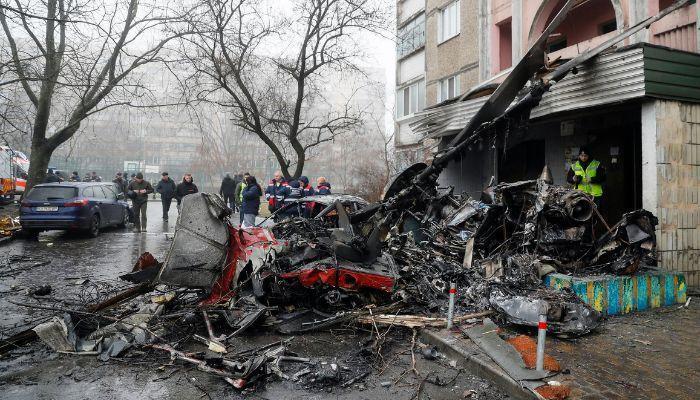 Denys Monastysrskyi, the interior minister in Ukraine and his deputy Yevheniy Yenin were among the 16 people who died earlier today in a helicopter crash in Kyiv.

According to the Guardian, the helicopter crashed this morning near a nursery school outside Kyiv. Three children and some senior officers were among the casualties of the fatal incident.

Oleksiy Kuleba, the regional governor confirmed the death toll of 16, he also said that 30 people were injured, including 12 children and many had burns.

According to the police chief and emergency services, nine of the people dead were aboard the helicopter.

Tributes have been sent by world leaders to the people of Ukraine and the families of the bereaved.

The news of the helicopter crash in Brovary is incredibly tragic. I’m sending my condolences to the families of the victims, to President @ZelenskyyUa, and to the Ukrainian people – and I’m wishing a fast and full recovery to the injured. Canada continues to stand with Ukraine.

Tragedy far from the frontline, in Brovary. My condolences to relatives of the victims, especially children. I wish a speedy recovery to those injured. Denys Monastyrskyi and Yevhenii Yenin were close colleagues & friends of mine, true Ukrainian patriots. Huge loss for all of us.