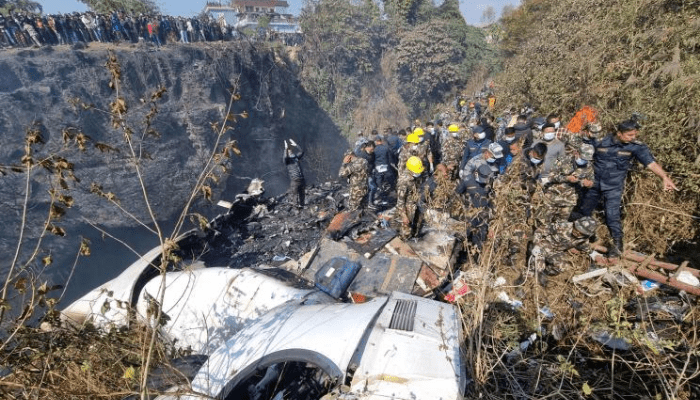 A plane carrying 72 people has crashed in Nepal, killing at least 69, officials have said.

Video on local media showed thick black smoke billowing from the crash site as rescue workers and crowds gathered around the wreckage of the aircraft.

Footage on social media showed the plane flying low before beginning to spin.

At least 69 bodies have been recovered from the crash site near Pokhara International Airport in the west of the country, Yeti Airlines said.

The plane was carrying 68 passengers, including three infants, and four crew members, a spokesperson for the airline said.

Of the passengers, five were Indian, four Russian and two South Korean, while there was one passenger each from Ireland, Australia, France and Argentina.

Rescue workers were having difficulty reaching the crash site as it sits in a gorge between two hills, a police official said.

“Half of the plane is on the hillside,” Arun Tamu, a local resident, said. “The other half has fallen into the gorge of the Seti river,” the police official said.