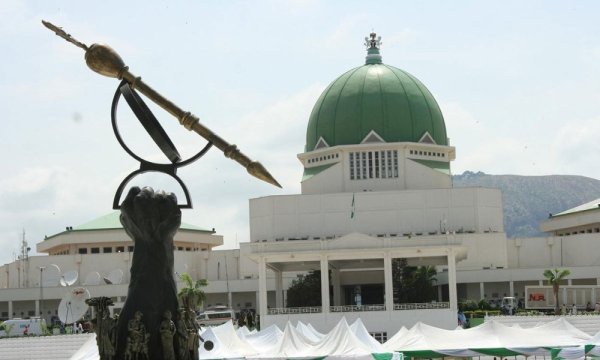 Share
The National Assembly has revealed that it will establish an arms bearing elite force to enhance adequate security in the complex, according to report of a committee on security.
This is even as there is suspected imminent attack that is said to have been planned by some terrorists as strange faces are reported to have invaded the National Assembly complex, in the last few days.
Security checks revealed that NASS is flooded with strange persons who are observed to have dressed in funny looking attires.
The strange persons, it was gathered pretend to be constituents of lawmakers and and beat security checks to gain entrance into the National Assembly complex.
“Yes! We have this dangerous intelligence reports that the National Assembly may be a victim of terrorist attack and we are not joking with it. Several steps are being taken but many stakeholders are not showing the needed co-operation.
“The way strange and very suspicious looking persons throng the National Assembly complex in recent times is worrisome. The situation has overstretched security architecture in the Assembly.
“Many of them if confronted at the gates are quick to resort to claims of being Constituents of one lawmaker or the other. The point must be made that the National Assembly is not a place to meet Constituents or have any form of ceremony with them,” the source stated.
Yahaya Dan-Zaria, Director of Public Affairs in National Assembly, told newsmen that “steps are being taken to nip the situation in bud.”
The Clerk to the National Assembly, Mohammed Sani Omolori had set up a security sub committee to proffer measures that will tighten security.
The committee was chaired by the Head, Sergeant – at-arms, Brigadier General Mohammed Sani Danwalis (rtd).
The committee recommended as follows:”Rationalization of banks and other business outfits whose operations are neither incidental nor complementary to the functions of the National Assembly.
“Leadership of the Senate and the House of Representatives should prevail on |egis|otors tc submit themselves to security checks, especially a the point of entry into the National Assembly:
“Security clearance should be a major requirement for disengaging Legislative Aides. Also, renewal of identity cards for Legislative Aides should be made annually”
“The Directorate of Human Resources and Staff Deveiopment should maintain a data base on all staff, legislative aides and legislators which should be shared with all security agencies:
“The Management of the National Assembly should advise security chiefs ta desist from bearing arms within the precincts of the National Assembly;
“The Directorate of Research and Information, in conjunction with security agencies, must ensure that joumaiists practicing in the National Assembly are accredited on a yearly basis:
“Sergeant-at-Arms, in conjunction with Department of State Services must step up vetting and accreditation of visitors to regulate human traffic;
“Construction of a betitting security accreditation centre to process visitors should be made a priority:
“The National Assembly, in conjunction with National identity Management Commission (NIMC) should ensure that henceforth, identity cards issued to staff, legislative aides and legislators have biometric features to stem the possibility of forgery:
“The National Assembly should integrate the available om communication facilities to ease the security
“The National Assembly should procure more radio and communication equipment to enhance response capacity on the part of security agencies;
“In the long run prayer houses within the White House Wilma should be relocated,” it stated.