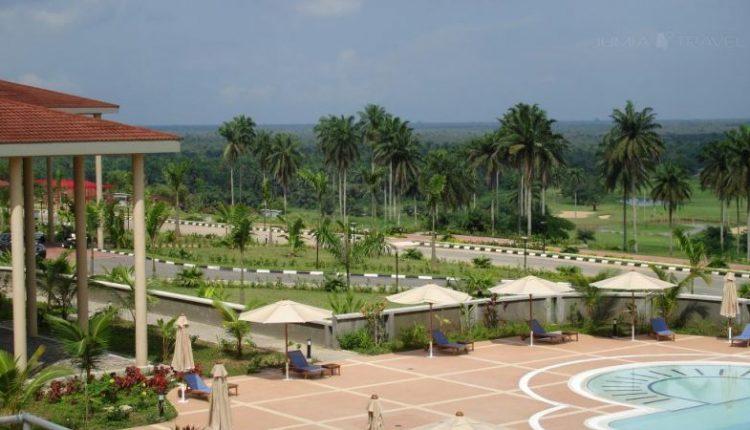 Share FacebookTwitterLinkedinWhatsAppEmailTelegram
Akwa Ibom State government has concluded arrangements to secure the services of the Icon Group to manage Ibom hotel and golf resort, believed to be a five-star hospitality facility.
Charles Udoh,  commissioner for information made this known while addressing journalists at the end of the state executive council meeting in Uyo, the state capital.
” In today’s meeting, council has approved the signing of management agreement with the  Icon Group for the management of Ibom hotel and as a matter of fact  the hotel has not received a major facelift since it inception.
“Facilities have deteriorated, services have been questionable, several management team have come and gone, so government of Akwa Ibom State decided to scout for experts to come in and take over the management of that facility so we can attain international standard which is our dream,” he stated.
The Commissioner said that the choice of the  Icon Group is borne out of their track record in the operations of Five Star Hotels in several countries including Kenya and Tanzania.
The new management, according to the commissioner, will ensure that the facility optimises it services as an international hospitality outfit and pointed out that the state government retains ownership of the hotel with it one hundred percent share holding.
“…by signing this agreement, Akwa Ibom government maintains the hundred percent ownership; all we have done is to sign a management agreement with experts, Icon Group.
” if you check their track record they have tentacles in several African countries from Kenya to Tanzania, so they have come forward as investors willing to partner with Akwa Ibom State Government on the management of the hotel”, he explained.
Shedding light on the signing of the MOU with Icon Group, the Commissioner of Culture and Tourism, Orman Esin, said that the hotel has witnessed upgrade of facilities to enable the new management take off in it operations and showcase their expertise.
He noted that with tourist potentials such as International Airport, beautiful Airline, Scenery, good road network, culutre , artefacts, cuisine and a five star hotel , Akwa Ibom remains a destination of choice for tourists.
The Information Commissioner added that the Council has also approved the recapitalisation of Anchor Insurance, a state owned Insurance company with the state government having a capital base 6.7 billion naira in the company.
He said the council also mandated the Ministry of Economic Development and Ibom Deep Seaport to produce Long-Term Development Plan which would guide the administration to actualise it completion agenda and provide a road map for economic growth in the state .
ANIEFIOK UDONQUAK, Uyo
Share FacebookTwitterLinkedinWhatsAppEmailTelegram

Leveraging education to a successful life – Greatiby, filmmaker and crypto…