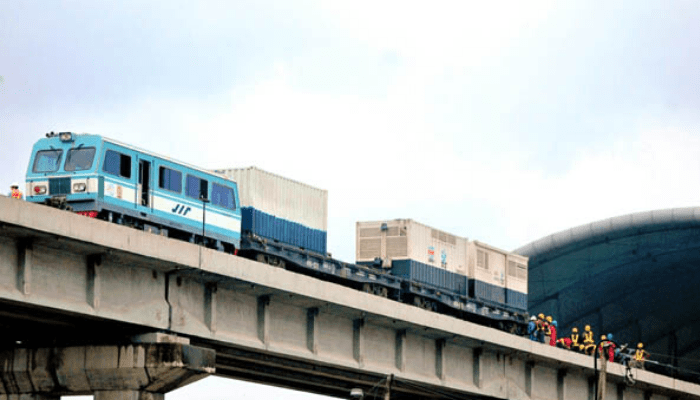 Commuters along the Lagos-Badagry expressway corridor have expressed doubt over the completion of the 27 kilometer CMS to Okokomaiko blue rail line project abandoned since the administration of former governor Akinwunmi Ambode of Lagos.
During a ministerial briefing to commomerate governor Babajide Sanwo-Olu’s one year in office last week, state commissioner for Transportation, Frederic Oladeinde said the blue and red lines rail projects remain the flagship transport developments of the current administration.
A cross section of commuters who spoke to our reporter expressed doubt on how the completion of the Lagos Rail Mass Transit (LRMT) Blue Line project from Marina to Okokomaiko will be achieved given the level of infrastructural decay that has bedevilled the humongous project.

As at the time of filing this report, a visit to some of the completed, but abandoned buildings designed for use as terminal train stations and disjointed and falle-apart remains of rail tracks all the way from the Orile Iganmu towards Mile 2 is a sad reminder of the level of neglect by the state government.
In December 2003, due to the enormous deficit in mass transit infrastructure, the then Governor of Lagos State, Bola Ahmed Tinubu, announced the plan to revive the Metroline project. The project was renamed the “Lagos Light Rail” Project, also known as the “Eko Rail”.
The first phase of the Metroline Project was expected to be completed in three years. The project commenced, though at a relatively slow pace.

A year before the completion date, the Metroline Project was terminated by the Buhari-led Federal Government. The reason given for the cancellation of the project was the unavailability of funds.
The Lagos Metropolitan Area Transport Authority (LAMATA) founded a year earlier, was saddled with the responsibility of managing the “Lagos Light Rail” Project.
The effort to develop the “Lagos Light Rail” Project involved an initial phase of building 2 lines made up of the Red and Blue lines, with the intention of extending it to 7 lines.
There was a five-year delay before the project kicked off. The contract for the project was awarded to the Chinese firm, Civil Engineering Construction Company (CECC) and was valued at$1.2billion. The completion date was set for 2011.

After the project commenced, the Lagos State government began seeking for investors that would operate and maintain these lines after the construction.
The plan was to award a concession contract to the potential investors of which would last for 25-30 years. The concessionaire would also be involved in the design and construction of the infrastructure relating to the operation and maintenance of the lines.
The Blue line of the “Lagos Light Rail” Project was expected to begin at Marina on Lagos Island and extend to Okokomaiko. This particular line was expected to be entirely funded by the Lagos State Government.
The total length of the Blue line (Okokomaiko to Marina) is 27km and comprises of 13 stations namely Marina, Ebute Ero, Iddo, Iganmu, Alaba, Mile 2, Festac, Alakija, Trade Fair station, Volkswagen station, LASU and the Okokomaiko station.