In June, over 500,000 mobile subscribers joined the various telecommunication networks in Nigeria, making it the first time in 8 months the sector is recording growth.

This is coming two months after the government lifted the ban on SIM card sales as a measure to get more Nigerians to register for their National Identification Number (NIN).

The latest data released by the Nigerian Communications Commission (NCC) found that the total number of subscribers rose to 187.2 million in June from 186.6 million in May. The last time the sector recorded growth was in October 2020. At the time the plan to have every Nigerian register for NIN had not kicked off, although the government had started to indicate it was serious about it.

With the ban now lifted and the economy starting to recover, the telcos are anxious to get Nigerians back to the networks.

However, the growth in June is not enough to stop the industry from closing the first half of the year in negative for the first time since 2012 the NCC began collating the data. The industry lost a total of 11.08 million mobile subscribers between January and June 2021. The industry added 25.5 million subscribers in all of 2020. This essentially means that in the first half of 2021 it lost about 40 percent of what it gained from one year ago.
It also means a significant revenue setback for the sector. Going by the industry’s average revenue per user (ARPU) of N1,420, the networks lost a total of N15.7 billion in revenue. 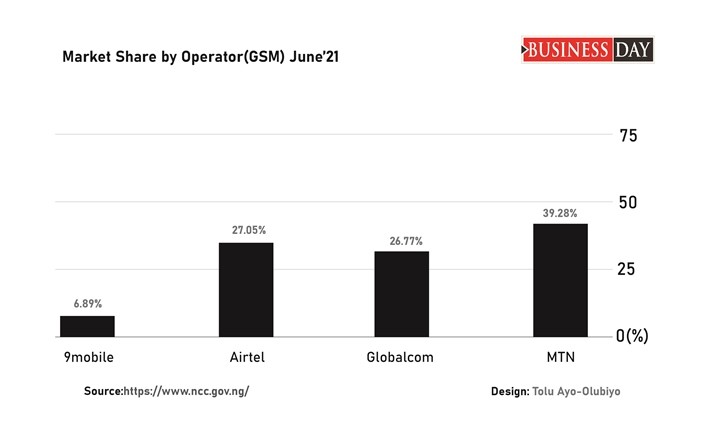 Karl Toriola, CEO of MTN Nigeria, said the company made progress in the first half of 2021 despite the impact of the COVID-19 pandemic.

“Our progress towards achieving greater business resilience is reflected in the upgrade by Global Credit Ratings (GCR) of our national scale long-term issuer rating to AAA, and affirmation of our national scale short-term rating of A1+ with a stable outlook,” Toriola said in the earnings report. “This puts MTN on the highest possible GCR scale for short-term and long-term ratings, providing a solid platform for growth,” he noted.

While MTN hopes to get on the path of growth, Globacom, Airtel and 9Mobile made some progress in June. Airtel was the biggest gainer welcoming back 638,935 subscribers, the most growth it has seen since October 2020. The telco also retained its second market operator with a 27.05 percent share in June compared with 26.80 percent in May.

Globacom, the third-largest operator, received 349,325 subscribers in June and a 26.77 percent share of the market compared with 26.6 percent in May.

9Mobile returned to the gainers’ table by welcoming 65,317 subscribers to its network and growing its share of the market to 6.89 percent in June.