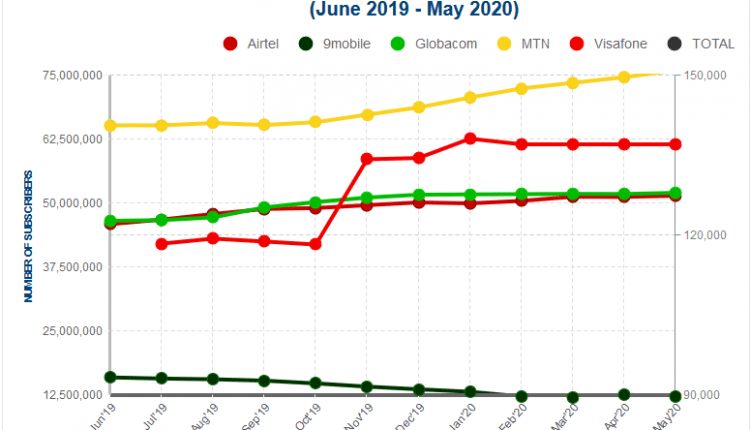 Nigeria’s fourth-largest mobile network operator, 9Mobile’s recovery in April is proving to be short-lived following the loss of 342,410 subscribers in the month of May, according to data from the Nigerian Communications Commission (NCC).

For the umpteenth time in a row, the Nigerian telco was the worst performer among the top four operators like MTN, Airtel and Glo all swelled their subscriber numbers in May.

In April, 9Mobile added 444,903 voice subscribers breaking a one-year losing streak. Experts had alluded the growth to the increased efforts the management was making to turn the company’s dwindling fortunes around. In February 2020, 9Mobile announced it was investing over $220 million to expand its 4G network in Lagos and other states. The company said it was targeting 100 percent coverage of the entire country with 4G over the next five years.

In May, it announced the appointment of a new chief executive officer, Alan Sinfield who promised to roll out new strategies that would attract subscribers.

However, some experts say the April’s growth may have had more to do with the enforcement of a lockdown across the country instead of the reform efforts at 9Mobile. According to them, while the total number of voice subscribers grew by about 2 million, operators like Airtel were unable to keep up with the number of new subscribers. As the quality of service dropped in Airtel, subscribers went for an alternative, 9Mobile. Airtel lost 40,496 subscribers in April while 9Mobile gained. But whatever Airtel lost in April, it regained more than twice in May where it added 237,874 voice subscribers.

Many network operators around the world reported a spike in voice calls as people started staying home to avoid the COVID-19. AT&T, a US-based network provider saw a 28 percent growth in voice calls in April. In the United Kingdom, the spike in voice calls was so much that they clogged up the systems that connect providers, leading to downtime. Traditional voice calls (as opposed to third-party apps like WhatsApp or FaceTime) are typically handled by proprietary systems within the carriers, which guarantee their low latency and quality of service. Those systems can clog up even if the network as a whole is not overloaded. Airtel users had at some point in May complained the network was experiencing downtimes.

Apart from growth in voice calls, MTN also said in May that it sent over 1 billion SMS within the first four weeks of introducing its free SMS package as a result of the COVID-19. The offer allows the telco’s subscribers across the country to send 10 free SMSs daily for 30 days to all networks. Airtel also offered its subscribers the same package with a caveat that “a Fair Usage policy applies to prevent network congestion at this time when network stability is paramount.”

Most subscribers say 9Mobile is yet to show it wants to compete for their attention given their plans have largely remained unchanged.

Since May 2016, 9Mobile has seen an unbreakable run of data subscriber exits. Within the period, the telco has lost more than 8 million data subscribers bringing its total to 7.2 million as of May 2020 from over 16 April million in 2016. Aside from expensive data packages, some subscribers say the network has gone from best to worse after the exit of Etisalat. 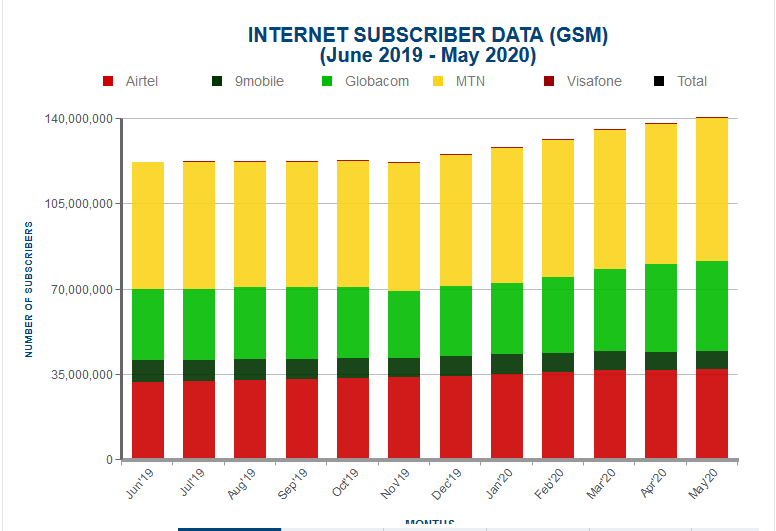 “9Mobile used to be the (best) in the era of Etisalat although they were pretty expensive and throttled their data a lot, they had legendary speeds,” said Maurice Mynor, a subscriber. “Now the Nigerian entity is slowly wrecking what is left of the company.”

For some subscribers, it is the limited options for data and voice that has seen them running to other networks.

For instance, while MTN, Airtel, and Glo have 25MB, 75MB and 1GB bundles that cost N50, N100, and N300 respectively and are due between one and two days as the least plans, 9Mobile’s least plan starts at N200 for 200MB and last two days. However, in May the company introduced a number of data bundle options that offer users almost the same benefits as they will get on other networks.

In June, 9Mobile told BusinessDay it will soon release its new roadmap for 2020 which contains strategies expected to turn around its fortunes.