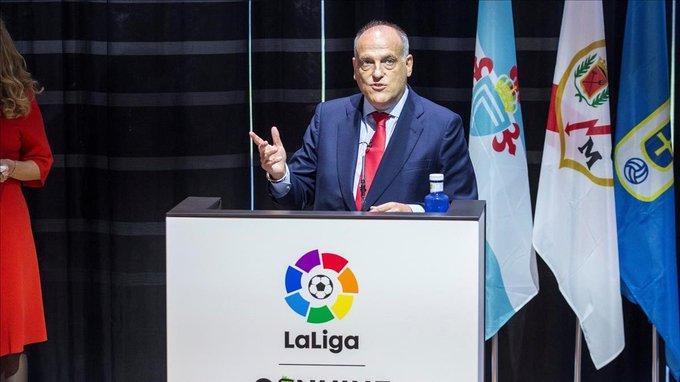 LaLiga president, Javier Tebas, participated in the Spanish Companies Leading the Future (EELF) Corporate Summit, organised by the CEOE (Spanish Confederation of Employers’ Organisations), during which he spoke about the importance of sport to the Spanish economy.

The LaLiga President featured in a panel discussion, which debated issues relating to culture and sport, alongside the president of Atletico de Madrid and EGEDA, Enrique Cerezo; the President of Iniciativas Teatrales, Enrique Cornejo; and Carlos Sainz, rally driver and the Director of Carlos Sainz Karting.

During his address, Tebas commented that “LaLiga clubs, like any other business, have owners who risk their assets to create not only entertainment but also wealth for Spain and its citizens. Sport generates 2% of Spanish GDP, of which LaLiga accounts for 1.37%, 185,000 jobs and €4.1 billion in tax revenue.

“We are one of Spain’s most important net export industries, if not the most important. We have a product, football, which is exported across the world via satellite and without transport and shipping costs. Exporting our broadcasts costs €40 million and in return we generate over €1.4 billion between broadcast revenues and sponsorships, a net total of over €1.35 billion coming into Spain.”

He added that “Spain is the country with the worst tax terms for footballers in the European Union. In Italy, France and the UK they have far more favourable tax terms for high-earning professional athletes, which is ultimately luring our talent to those countries. It’s simple, if our talent leaves, our national and international broadcast value drops. And if that happens, the standing of our league will drop and so too will the number of jobs we generate.”

The EELF Corporate Summit is being held in Madrid over this week and next and aims to analyse the state of the Spanish economy following COVID-19 and consider how to make it more modern, competitive, robust and sustainable. Over 100 speakers joined the LaLiga President at the summit, including Pablo Isla, the President of INDITEX; Ana Botin, the Chairwoman of Santander Bank; Jose Maria Alvarez-Pallete, the President of Telefonica; Luis Gallego, the President of Iberia; and Marta Martinez Alonso, Chairwoman at IBM.

Business Lessons Learnt from Lockdown Due to The Global Pandemic