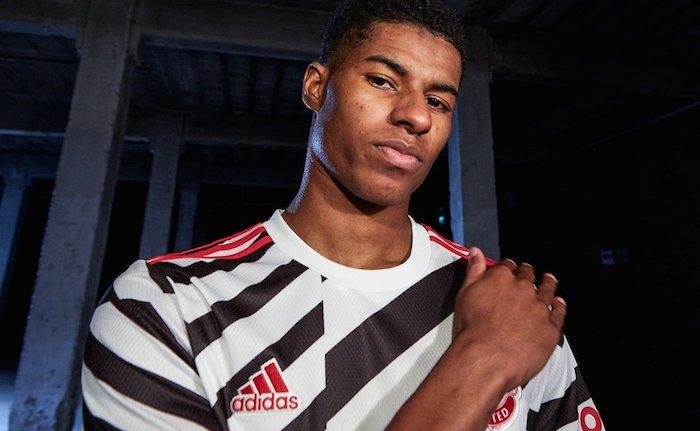 A forgotten friendly between Manchester United and Sheffield United proved the starting inspiration for the club’s new third kit.

The new black and white striped kit with red detailing was unveiled by Adidas to complete United’s collection of shirts for the new 2020/21 season.

The shirt has a special recognition on the inside of the collar to recognise United’s 110th year of playing at Old Trafford, with a similar design to the plaque at the stadium for the centenary year at the Theatre of Dreams.

That anniversary proved central to the Adidas design team’s vision for the new kit, with various stripes on the concourse floor and safety shutters throughout the stadium catching the eye of lead designers Inigo Turner and Chris Barnard. Those stripes, as well as iconic striped United kits of the 1910-30s and the 1994-96 blue and white away shirt, were the inspiration behind the new striped design.

The designers also pointed to the first change kit ever worn by United at Old Trafford – a striped design from a forgotten friendly in 1910 against Sheffield United.

Other stripes factoring into the design were the three stripes on an early coat of arms for Manchester and the stained glass window at Manchester Central library. Those diagonal stripes, combined with the horizontal and vertical stripes of previous United kits, were combined by the design team and given a monochrome colour scheme to create the unique design of the new third kit.

“We think we have redefined the way things can look. It will define opinion and accept for many it will be too far. But it will grow on people.”

The kit will be worn by United teams with plain white shorts and socks with a red trim, in order to increase playability for players and adhere to UEFA rules that determine one strip must be ‘light’. The back of the shirt will be plain white, with player names and numbers in red.

Supporters will have the option to purchase shorts and socks with the same striped pattern as the shirt.