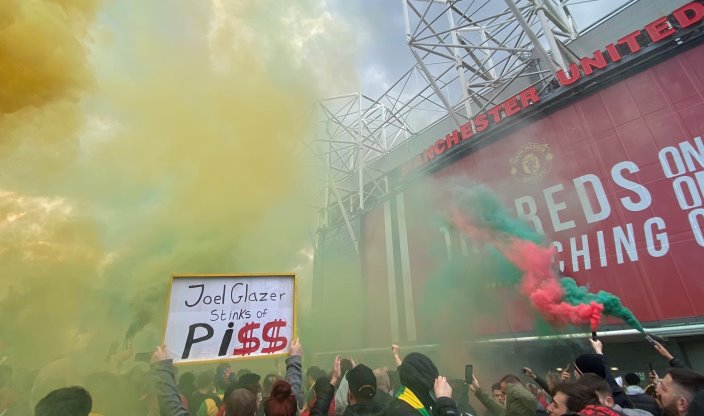 Manchester United game against Liverpool was delayed after hundreds of United fans broke into Old Trafford stadium to protest against the Glazers family.

The game was set to kick off at 16:30 BST but was put back on safety grounds.

The fuming fans also blocked Manchester United squad from leaving the Lowry Hotel ahead of their clash against rivals Liverpool on Sunday afternoon.

The United faithful gathered en masse outside the Theatre of Dreams in a protest against the Glazers, where Ole Gunnar Solskjaer pleaded for it to be peaceful.

But tempers flared during the protests with supporters seen throwing punches at each other.

And footage later emerged online showing fans inside the ground where they stormed onto the pitch and lit off flares.

A flare was also thrown towards the Sky Sports studio, where Liverpool legend Jamie Carragher was watching from.

Sky Sports said during their live broadcast that pitch side cameras as well as balls, corner flags and other items have been taken.

Around 10,000 fans are believed to be campaigning against the Glazers as fans look to force their American owners to leave.

Fans were left furious by the club’s plans to enter the European Super League, before they were forced to pull out following mass outrage.

Speaking ahead of Sunday’s protest, Solskjaer said: “It’s important that the fans’ views are listened to and we communicate better.

“My job is to focus on the football side and that we have the best possible team.

“As I’ve said before I’ve been backed, I’ve had great support from the club and the owners and I’m sure I will get the backing again to go one step further.

“But I’m so happy all the clubs have agreed that this shouldn’t be the way of moving forward.

“Then again, when the protests are on, it’s important they go in a good fashion and that we keep it peaceful.”

The Athletic have stated that Old Trafford has been placed on lockdown.

“Hundreds make their way through the stadium and exit the other side.

“Security taking a sensible approach, letting them out the gates where team coaches should arrive later.”

Amid the chaos, Sky have reported that referee Michael Oliver and his team have been denied access to the ground for now.

And unsurprisingly, United’s clash against Liverpool has been delayed, with Geoff Shreeves declared: “We’ve just been told by the Premier League that kick-off will be delayed.

“It will not kick-off at 4:30 this afternoon, as yet, we do not have the revised kick-off time either.

An announcement was made over the stadium tannoy at 4.50pm saying: “Thank you for your patience, the stadium is now secure.

“Please go back to your employments and areas of work. Thank you.”

How Guardiola turned Man City into a title-winning club