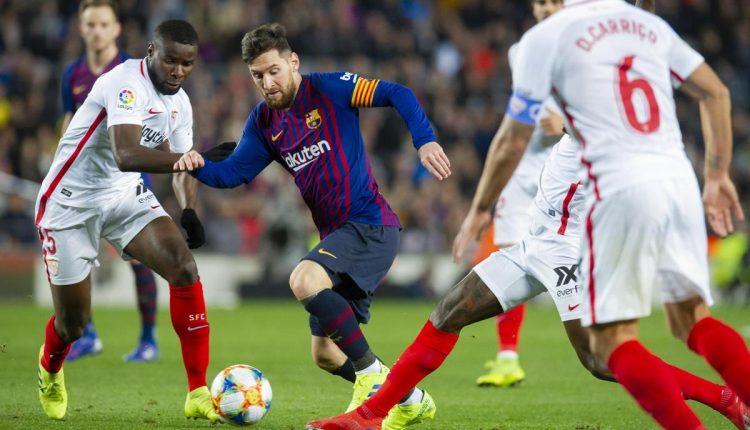 Julen Lopetegui’s men are on a high thanks to last week’s derby win over Betis but Messi just loves playing – and scoring – against Sevilla. You won’t want to miss this one.

The match is likely to have huge ramifications on the top of the LaLiga standings: whether Sevilla can strengthen their hold on a Champions League spot and whether Barça finish the season as champions… or not.

Both teams returned from the coronavirus-enforced break in the Spanish football season on the front foot.

Sevilla kicked off the restart with a big 2-0 win over city rivals Betis, with the performance even more impressive than the result.

Barcelona also returned in style, with Arturo Vidal scoring after just 65 seconds on the way to a 4-0 away win over Mallorca in their first match back.

Lionel Messi is always one to watch, but especially so against Sevilla. The Andalusians are his favourite victim; he has scored more goals over his career against them than against anybody else.

With 37 goals from his 38 meetings with Sevilla, the mercurial number 10 averages almost a goal a game every time he takes on the Andalusians.

To say Sevilla are sick of the sight of him would be an understatement.

Another of Quique Setien’s men to watch is Jordi Alba.

The left-back comes into the game in good form and with fresh legs; a goal and an assist vs Mallorca plus sitting out Tuesday’s match with Levante at the Camp Nou means he’ll be raring to go. His battle down the flank with Sevilla’s veteran right back Jesus Navas should be fascinating.

On the home side, watch out for defensive midfielder Fernando Reges, who holds everything together in the middle of the park and even chipped in with a goal against Betis last week. But above all, Barça will need to watch Lucas Ocampos.

The Argentine forward has impressed beyond expectation in his first season in LaLiga. Just last week he opened the scoring against Betis and then assisted Fernando for the second with an audacious flicked assist.

The overall record between these sides is historically weighted in Barcelona’s favour, especially at the Camp Nou, where Sevilla haven’t won since 2010. But in recent years at the Ramon Sanchez-Pizjuan, it’s been a different story. Sevilla vs Barcelona is an unpredictable fixture, with three Barça wins, two Sevilla wins and two draws in their past seven meetings.

This won’t be an easy game for Barçelona, but Sevilla aren’t favourites either. As with most things in top-level football, it’ll likely come down to whoever can make that tiny bit of difference on the night.