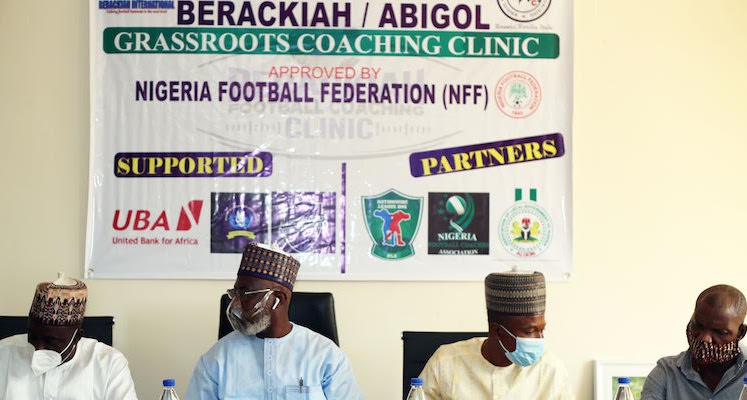 The Nigeria Nationwide League One (NLO) has signed a Memorandum of Understanding (MOU) with a football coaching clinic organisation, Berackiah/ABIGOL Grassroots Coaching Clinic to help develop the skills of its league coaches which in turn will assure the broad development of the game as well as the talents spread across the nation.

In the full glare of the Nigeria Football Federation which approved the clinic, all parties involved put pen to paper to activate the project which is expected to kickoff from the 25th January through to the 31st of March 2021 across the six geopolitical zones of Nigeria.

Speaking at the event, General Secretary of the NFF, Dr. Mohammed Sanusi stated that the development is a welcome idea, which prompted the Executive Committee of the NFF to approve the clinic even as he charged the organisers to ensure best practices are maintained during the exercise.

“We have so many clubs in the Nationwide League One whose coaches need to be trained and retrained from time to time and this will go a long way to help us. The NFF, which is charged to monitor, direct and organise the affairs of football in the country, met at the board level and consented to this agreement. We however charge the organisers to ensure due process is followed and avoid anything unethical during the exercise,” the foremost football administrator stated.

Sanusi further charged the organisers to be diligent whilst warning that they avoid cutting corners which may force the NFF to cancel the entire exercise.

Earlier, Chief Executive Officer of Berackiah Football Coaching Clinic, Wonders Nwigwe, thanked the NFF for its support and promised that the organisation will do its best with the help of its technical partners and all involved to have a successful coaching clinic.The clinic is expected to have eminent football coaches such as former Super Eagles Coaches and CAF Instructors, High Chief Adegboye Onigbinde, Coach Kashimawo Laloko, Coach Franko Granangali, Sansiano Daniale and Matthew Olorunleke from Italy, as instructors during the event.