It’s been a good week for cryptocurrency investors with the market seemingly on the up, coming into April, it’s looking like a good time to add to the contents of your crypto wallet.

With Bitcoin (BTC) and Ethereum (ETH) recovering well, the market has taken after their good performances with the likes of Dogecoin (DOGE) and Polygon (MATIC) also in the green.

The market has also witnessed Calyx Network (CLX) announcing itself in the crypto industry with plans to fully embrace decentralised finance (DeFi).

Calyx Network (CLX): The next big thing in DeFi

Aiming to allow cryptocurrency trading on a multi-chain level, Calyx Network (CLX) aim to allow the sourcing of liquidity from various sources to enable both crypto trading and token swaps at cost-effective prices.

The token swaps will take place on CalyxSwap where users are able to earn a percentage of the fees from the swaps that have been executed.

Users can stake CLX tokens for the opportunity to vote and participate on proposals in the CalyxDAO alongside earning lucrative awards.

Dogecoin (DOGE): Call it a comeback

In what has been a fruitful two weeks with the original meme coin up almost 16% in that time, according to data from CoinGecko, Dogecoin (DOGE) looks to finally be on the up.

Launched in 2013, it’s been a slow but steady rise to the cream of the crop in the cryptocurrency industry with the project ranked as the 12th biggest cryptocurrency in the world with a market cap of over $18 billion, according to data from CoinMarketCap.

According to some analysts, DOGE could reach a value of $0.3500 by the end of the year, in what would be a rise of 191% on its current daily. 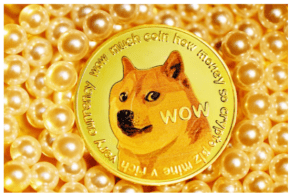 The rising potential of Polygon (MATIC)

Launched in 2017, Polygon (MATIC) is a technology platform that allows blockchains to connect to each other and scale as well as housing its MATIC cryptocurrency.

Labelled as one of the “Ethereum killers”, Polygon’s scaling solution allows for fast transactions and low gas fees, opposite to Ethereum due to its proof-of-work consensus.

MATIC is used for a multitude of purposes including paying fees on the Polygon network, for governance which allows MATIC holders to participate and vote on changes to Polygon and for staking purposes.

Polygon is ranked as the 16th biggest cryptocurrency in the world with a market cap of over $12 billion, according to data from CoinMarketCap.

Trading at $1.64, at this time of writing, MATIC is up 13.7% in the past 14 days and an impressive 403.4% up in the past year, demonstrating the growth Polygon has been experiencing.