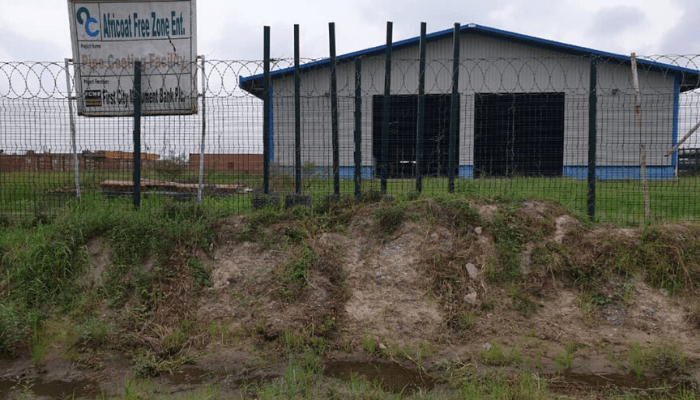 In response to the calls by the Nigerian government for foreign investors to invest in Nigeria, the stakeholders of Africoat made a conscious decision to invest a considerable amount of money in the Nigerian pipe coating business. This decision was based on credible market data.

Africoat can boast of world-class expertise as their Nigerian and expatriate personnel is made up entirely of ex-employees of Bredero Shaw with extensive technical expertise in worldwide pipe-coating operations.

To start their operation in Nigeria, Africoat purchased a complete corrosion and concrete weight coating plants from Korindo in Indonesia in 2012, packaged for freight and shipped to Nigeria by charter vessel directly to the Lagos Deep Offshore Logistics (LADOL) base in Lagos where they established a world-class pipe-coating facility.

Unfortunately, a dishonest caretaker of the Lagos Free Zone has deployed all arsenals at its disposal to strangle and seize Africoat assets by creating a toxic working environment to derail the aggressive ambitions of building local capacity in Nigeria and creating employment opportunities.

As soon as Africoat settled for business, LADOL terminated the services agreement signed with Africoat and gave the final notice for the removal of all Africoat equipment/properties from the free zone immediately.

The termination of the services agreement and LADOL’s refusal to renew the NEPZA operating license caused Africoat to lose promising business opportunities followed by the dismissal of its employees.

LADOL’s ultimate ambition in the free zone is not to attract investors to boost Nigeria’s economy but to lure unsuspecting investors to make investments that LADOL will later attempt to seize.

When the unsuspecting investors make millions of dollars of investments, LADOL will create a toxic environment that makes it impossible for investors to operate so that it seizes all the investments, especially as some of these assets are immovable.

For instance, LADOL issued a Final Notice on Removal of Africoat Properties from the zone on November 21, 2018, and gave Africoat nine days to complete the evacuation that took over 18 months to establish.

Africoat is not the first victim of these underhand tactics; others have suffered the same fate, leading to multiple litigations in Nigerian courts and abroad.

Indeed, no other free zone in Nigeria is bogged down by multiple litigations like LADOL free zone and the inflexibility of the free zone manager towards conflict resolutions has made a peaceful settlement of these disputes a herculean task.

Africoat paid LADOL in excess of $25,000 to renew our operating license in January 2018.  LADOL withheld the license for 10 months until the then Minister of Industry, Trade and Investment, Madame Aisha Abubaker personally intervened and forced LADOL to issue the license.

Even after the minister forced LADOL to issue Africoat with license, LADOL resorted to physically blocking Africoat’s employees from access to the zone.

Africoat business has suffered from the unreasonable antics of Ladol.  Africoat has lost or forfeited pipe-coating works as a result of Ladol refusing to provide services.  Ladol invoiced Africoat for hidden and exorbitant fees and demanded fully payment in advance of providing the services.

Africoat had the privilege of meeting with the then acting Managing Director of NEPZA, on two occasions and was assured that action would be taken to check LADOL’s impunity and flagrant violation of free zone regulations. However, nothing was done and this created the impression that LADOL was either above the law or it was being protected by NEPZA, or both.

NEPZA later called Africoat and LADOL to attend a meeting at the NEPZA office on April 26, 2019.  This meeting highlighted the fact that NEPZA were protecting Ladol’s interest. This meeting was a one-sided affair with no effort in seeking resolutions to the ongoing problems perpetrated by Ladol on Africoat.

Certain NEPZA officials sided with LADOL with no intent to take action against LADOL’s impunity in the management of Lagos free zone.  At this point, NEPZA was considered part of the problem and not part of the solution.  Issues such as different rates for different clients were acknowledged by NEPZA to be in violation of regulations but Ladol was allowed to continue to impose different rates.

NEPZA’s apparent complicity in frustrating investments in Lagos Free Zone is in contrast with President Buhari’s efforts to attract investments.

It appears only the NPA is taking actions to save investors operating in the free zones and portray Nigeria in a positive image.

The Nigerian government must not allow private organisations such as Ladol to create monopolistic business environment utilising government assets.
LADOL, by their commercial actions, should be investigated for financial crimes.

Four Ways To Optimise Your Hiring Process as Your…