How have major African currencies performed this year? 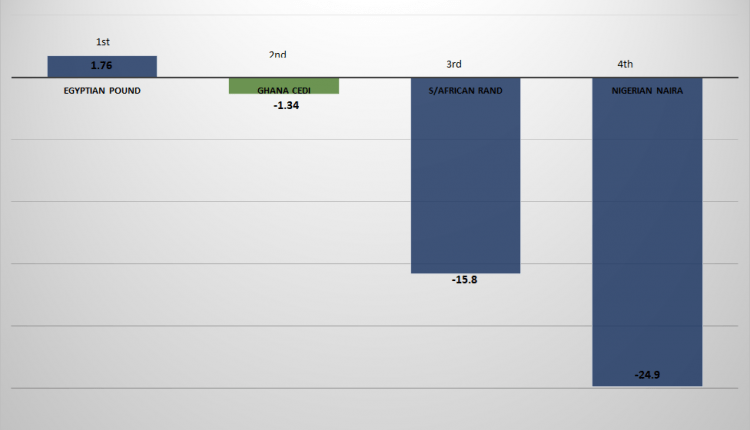 Africa’s top currencies have been hit greatly this year as a result of the coronavirus pandemic, but the Egyptian pound stands out as the best performer among peers.

The Egyptian pound produced a modest return of 1.76 percent, representing an appreciation of the currency against the U.S dollar year-to-date.

Behind the Egyptian pound is the Ghana cedi which depreciated by 1.34 percent.

The South African rand is third on the list after recording a 15.8 percent decline against the dollar year to date.

The Nigerian naira was the worst performing currency of the selected currencies. The naira has been devalued by 24 percent this year.

Egypt’s currency was one of the world’s best performers in 2019 and has remained strong against the U.S dollar irrespective of the COVID-19 pandemic.

The currency which was floated in 2016 at a time when the country faced a foreign exchange crisis has had carry trade piling into the country’s local currency.

Despite the depletion of Egypt’s foreign reserve this year to US$36 billion from US$45 billion pre-COVID-19, the Egyptian Pound has continued to appreciate, according to a statement released by the Egyptian cabinet.

Ghana Cedi has been on a steady decline against the dollar over the last 25 years, with creeping inflation and a crawling economy. Barely a month into 2020, Cedi rose to become one of the best-performing currencies in the world.

Year-to-date, the Ghanaian cedi is at 5.78 to a dollar, depreciating against the dollar at a slower pace than the Nigerian naira and South African rand.

The depreciation so far for the year is the lowest since 2014 and this is particularly remarkable given the context of the coronavirus pandemic, according to Ebenezer Ashley, Economist and Business Consultant.

The Ghanaian economy has been doing better as far as economic fundamentals are concerned because the Ghanaian government has been able to prudently manage inflation, interest rates and foreign reserves, some analysts have said.

The Central Bank of Nigeria (CBN) has devalued the naira two times in 2020 as a result of the tremendous pressure from the collapse in global oil prices as well as pressure from international lenders to unify multiple exchange rates.

The first weakening of the official naira exchange rate was in March which saw the naira move from 305 per dollar to 361 per dollar, while the second devaluation was in July when the naira weakened to 381 per dollar.

The Nigerian foreign reserve has been depleting and stands at US$36 billion today, but the monetary authorities in Nigeria have maintained that the devaluation of the naira is a positive step towards the unification of the multiple exchange rates plaguing the Nigerian markets.

The South African rand is the worst-performing currency as her economy continues to struggle with low economic growth, capital flight and sovereign concerns that have affected investors’ confidence thereby affecting the currency of one of the largest economies in Africa.

In March, South Africa lost its last investment-grade rating as Moody downgraded the rating to Ba1 (Junk), citing a weak economy, with rising government debt and an unreliable power sector.

These vulnerabilities amid coronavirus concerns led to large capital flight in the country and at the end of Q1 2020, Bloomberg reported that foreign investors had sold about $3.2 billion of South African bonds.

Rand has however recovered to 16.1 rand versus the US dollar, since hitting a low of 19.35 in April

The Rand is currently down by about 15.8 percent YTD against the dollar and analysts expect that the currency could further weaken before any recovery.

Currency analysts have noted that the South African Reserve Bank’s monetary policy framework is more committed to inflation stability than currency management, hence does not directly intervene in the market like the Central Bank of Nigeria.

Ghana outpaces Nigeria in foreign direct investments first half of 2020