The debts stock of the country: Why Nigeria seeks external lenders

The nation’s debt stock data as at the second quarter (Q2) of 2020 showed that the total public debt portfolio of the federal and state governments combined stood at N31.01 trillion as at June 30, 2020. This figure is a cumulation of both domestic debts and external debts, where the former (domestic debt) accounted for 63.35 per cent (N19.65 trillion) of the total debt portfolio, and the latter accounted for 36.65 per cent (N11.36 trillion).

The debt stock data further revealed that the Federal Government of Nigeria (FGN) alone was responsible for N25.28 trillion of the total public debt portfolio. That is, 81.53 per cent of the country’s debt is attributed to the FGN, while the 36 states and the Federal Capital Territory (FCT) accounted for the remaining 18.47 per cent to the tune of N5.73 trillion.

Source: NBS, BRIU
These debts whether externally or internally incurred by the FGN or the states (including the FCT) increased by a significant 20.60 per cent between Q2 2020 and the corresponding year. The continuous increase in the nation’s debts speaks volume on the type of budgets of the federal government and the state governments including the FCT—they are running on a deficit budget. A reason why the nation’s debt stock (external or internal) continuously increases.

The data further revealed that 86.46 per cent of the external debt stock in Q2 2020 is mainly incurred by the federal government to make up for its shortage of funds to finance projects: either capital or recurrent. Although Nigeria’s revenue mainly comes from oil and through taxation; more strategic and intentional approaches on diversification will save the day.

The increase in external debt was concurrent with total domestic debts as the total domestic debt stock increased by 13 per cent year-on-year (YoY) from N17.38 trillion to N19.65 trillion in Q2 2020. It is a given that the FGN borrows more and that is the reason its debt accounted for 78.67 per cent (or N15.46 trillion) of the total debts in Q2 2020; leaving the remaining 21. 33 per cent to the Nigerian states and the FCT, that is, an indebtedness of N4.19 trillion within the same period. This means that FGN debt stock represents 78.67 per cent of the total internal debts, while states (including FCT), the remaining 21.33 percent. 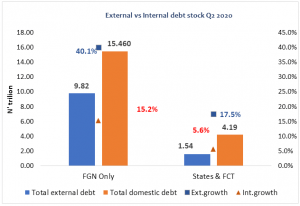 Why does the country continue to seek external lenders? Well, the economy needs money to run smoothly. The lenders of these monies are either commercial banks and/or private persons/institutions with probably higher interest rate on a shorter-term loan compared to the foreign lenders—commercial, bilateral and multilateral (like the Eurobonds, Exim Bank of China, and International Monetary Fund (IMF) respectively, to mention each but few), that may present a lower interest rate and a longer loan term to these borrowers.

Another reason could be the amount to be lent. The amount required could be much that internal lenders may not be able to raise it and if they can, they may be unwillingly to lend it for a short term. However, the creditworthiness of the FGN and the state governments (including FCT) is a major determinant of how much credit that will be given. As of March 2020, Standard & Poor’s (P&S) credit rating for Nigeria stood at B- with stable outlook. Whereas in April, Fitch’s credit rating for Nigeria was reported at B with negative outlook. Either of these rates puts Nigeria as highly speculative, that is, at a high risk of loss when invested upon.

So, the big question is, why did the external debt increase this much (36.5 per cent) compared to the 13 per cent increase in internal debts between Q2 2019 and 2020? Among other reasons is the emergence of COVID-19 which disrupted economic activities in the country as well as its consequence on the unprecedented shocks in the prices of crude oil’ thereby impacting on the revenue of the country.

Since business/trading activities crippled during this period with some which may never recover, then it leaves the borrowers (FGN and states) no option but to seek external help. For instance, around early Q2 2020, the IMF executive board alone approved $3.35 billion as emergency support for Nigeria to address the COVID-19 pandemic. Other external lenders made similar moves too.
By and large, debt is a necessary means of financing projects in the economy, however, paying up these debts rather than just servicing the debts is of utmost importance to be creditworthy.

Nigeria businesses in retrospect: highlights of where we are

How electronic platform is boosting tax revenue generation in 2020