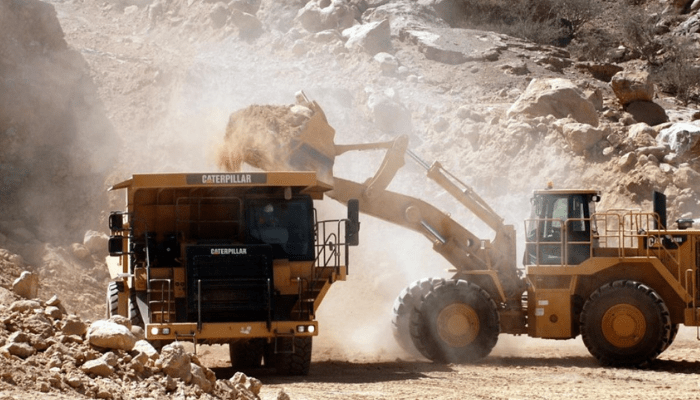 The mining and quarrying sector consists of crude petroleum and natural gas, coal mining, metal ore and quarrying and other minerals sub-sectors. The sector recorded a slip in its revenue contribution to the country’s coffers for the period ended Q2 2020.
Findings show that the sector is largely unexploited despite the huge potential it has in providing alternative revenue sources for the country. Although, over time, there have been different policy and measures put together by the relevant authority to boost the sector as part of the efforts to diversify the economy, little was achieved because of insufficient geo-data, weak infrastructure and limited policy enforcement. These, however, impacted negatively or rather held the industry back.

“However, despite Nigeria’s extensive and globally competitive regulatory framework, Nigeria’s mining industry is largely unexploited and contributes very little to the country’s industrial output. As at 2016, the Mining Index for Nigeria was still comparatively the lowest at 84.1 per cent, in comparison with that of the United States of America (USA) at 133.9 per cent, Australia at 131 per cent or even South Africa at 98 per cent. This is expected since these are known destinations with long-tested mining cultures, and consistency in the formulation”, NEITI’s 2019 report titled “Improving Transparency and Governance for Value Optimisation in Nigeria’s Mining Sector” stated.
NEITI data shows that the solid minerals sub sector contributed a total sum of N43.22billion to government’s coffers in 2016 and this represents a 33 per cent decline compared to the preceding year 2015. The dip in revenue can be attributed to the recession that almost halted the Nigerian economic activities.

However, the breakdown of the receipts shows that the mining taxes collected by the Federal Inland Revenue Service (FIRS) accounted for N40.38 billion or 93.43 per cent, while fees collected by the Mining Cadastral Office stood at N1.15 billion or 2.66 per cent.
In 2017, the sector recorded a moderate feat as a contribution to the government’s coffer increased by 21 per cent from N43.22 billion in 2016 to N52.75 billion in 2017. Further analysis shows that out of the N52.75 billion revenue contribution, the FIRS accounted for N49.162 billion, which represented 93 per cent of the revenue realized during the reference period.
On the other hand, the payments to the Mines Inspectorate Department (MID) and Mining Cadastre Office (MCO) amounted to N1.59billion and N2.08 billion or about 3 per cent and 4 per cent respectively of the total revenue generated from the sector.
In 2018, the sector contributed N69.47 billion to federation revenue the highest so far since NEITI commenced reconciliation of payments in the sector. The figure shows an increase of N16.71 billion, representing 31.67 per cent over the 2017 revenue of N52.76 billion. The 2018 earnings of N69.47 billion also accounted for 16.69 per cent of the total revenues (N416.3billion) that accrued from the sector from 2007 to 2018. 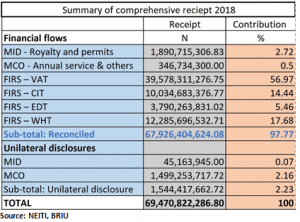 Solid mineral production volume and value for 3-years period
The Nigerian mining and quarrying sector recorded a total volume of 123.88 million metric tonnes for 3 years, that is, from 2016 through 2018 with a total value of N114.74 billion. Interestingly, the sector recorded 22 per cent growth in production in 2018 when compared to 35.33 million metric tonnes recorded in 2017. A breakdown of the production volumes showed that limestone and granite accounted for about 80 per cent of the total minerals produced in 2018. This represents a 5.72 per cent decline compared to 2017. In 2018, limestone alone contributed 54.85 per cent while granite accounted for 23.88 per cent of minerals mined in the country.

Mineral production on a state-by-state level
On state-by-state production, the NEITI’s Report disclosed that in 2018, most of the mining activities in the country took place in Ogun State. The state accounted for 12.66 million metric tons (27.13 per cent) of the total volume produced.
Ogun State was followed by Kogi and Benue states, each accounting for 22.88 per cent and 10.10 per cent respectively. However, on the bottom of the table are states like Enugu and Borno states which contributed 0.02 per cent and 0.001 per cent respectively.
Contribution of the mining sector to GDP
The pandemic-induced lockdown and business disruption have put the mining and quarrying industry on a life-support machine, according to the recent National Bureau of Statistics (NBS) data. The sector declined ostensibly by 16.02 per cent (year on year) in Q2 2020.

Nigeria businesses in retrospect: highlights of where we are

How electronic platform is boosting tax revenue generation in 2020

The debts stock of the country: Why Nigeria seeks external lenders