The Nigeria electronic payment landscape continues to pose strong growth across various payment channels despite Nigeria’s economic realities. The population is much poorer today than what it was a decade ago. Current GDP growth rate shows the Nigerian economy slumped by 6.1 per cent in the second quarter of 2020. Inflation, a general rise in the prices of goods and services such as food, clothing, housing, recreation, transport, consumer staples, etc, is also on the rise. Inflation measures the average price change in a basket of commodities and services over time.

Nonetheless, the composition of the electronic payment market remains healthier with various payment channels emerging amid the challenging business environment. It has proven that economic growth cannot take place in the absence of the digital economy. The new e-payment realities are that consumers are vastly becoming digitally savvy consumers while consumer shopping habit changes to accommodate the new reality.

This new normal is in line with the ‘Theory of reasoned action’ created by Martin Fishbein and Icek Ajzen in the late 1960s which posits that consumers act on behaviour based on their intentions to create or receive a particular outcome. In this analysis, consumers are rational actors who choose to act in their best interests. A consumer only takes a specific action when there is an equally specific result expected. From the time the consumer decides to act to the time the action is completed, the consumer retains the ability to change his or her mind and decide on a different course of action.

“The new shift towards digital technologies should not come to anyone as a surprise because economic growth has always been spurred by revolutionary inventions, only that with some digital technologies, their usage is global compared to some revolutionary inventions of the past”, past publications posit.
Before this improved feat recorded in the e-payment space, beginning from 2015, resulted in the integration of the payment gateway was expensive and technical. It cost ₦150,000 to integrate payments using QuickTeller in the early 2010s. 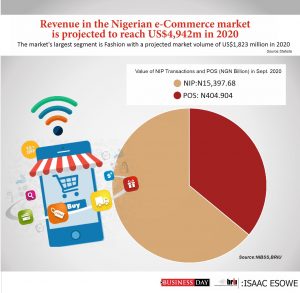 Small businesses avoided these concerns by signing up as vendors on the popular e-commerce websites. So far, the thing is taking a new shape since the emergence of the PayStack, Flutterwave among others electronic payment integration platforms.
Over the last four years, the value of online payments using mobile apps have jumped from ₦12.1 billion ($31.5 million) in January 2017 to ₦133.2 billion ($347.2 million) in January 2020. More growth is possible as Nigeria’s internet population continues to grow. There are over 120 million internet subscribers in the country, up from 20 million a decade ago.

Mobile subscriptions in Nigeria rose by 5.35 per cent between March and July 2020 with active lines at 198.9 million compared with 188.8 million in March 2020. MTN Nigeria which controls over 40 per cent of Nigeria’s telecommunications sub-sector saw a 13 per cent increase in revenue from N638.1 billion in June 2020 as against N566.9 billion in June 2019.

Airtel Nigeria’s first-quarter results for the first quarter ended in June 2020 were impressive, as revenue for the period increased by 8.9 per cent. Data revenue posted the highest gain among its revenue sources. It rose by 30 per cent while other revenue increased by just 4.5 per cent.
Revenue in the e-Commerce market is projected to reach US$4,942m in 2020. Revenue is expected to show an annual growth rate (CAGR 2020-2024) of 15.9 per cent, resulting in a projected market volume of US$8,917 million by 2024. The market’s largest segment is fashion with a projected market volume of US$1,823 million in 2020, according to Statista data.

Market trends and consumers behaviour
While e-commerce is starting from a relatively low base, the market looks promising for rapid expansion. Demographics, income and internet uptake all suggest that online retailers are well placed to generate strong revenue in this key African market. However, e-commerce faces several impediments to growth, including poor distribution infrastructure, existing consumer payment preferences and logistical issues.
However, the government has shown a commitment to turn Nigeria into a digital economy that will promote job opportunities and security, according to the Minister of Communications and Digital Economy, Isa Ibrahim Pantami.
And again, recently, the Standard Chartered Bank collaborated with Visa to launch a new ‘Safe is Smart ‘campaign. The initiative is aimed at encouraging the adoption of e-commerce solution. The campaign also seeks to provide convenient and secure cashless payment alternatives through the Standard Chartered’s Visa Debit card, QR payment solutions and the Standard Chartered digital banking mobile app.