Factors that pushed Nigeria into recession

Before the emergence of the global pandemic, Nigeria has been struggling to stabilize its weak economic activities amidst the existing rise in inflation and unemployment rates—stagflation. Hit hard by the spread of the coronavirus, the decline in oil prices, and other consequential factors, Nigeria slips into its predicted recession in Q3 2020.

According to the data released by the National Bureau of Statistics (NBS), Nigeria’s gross domestic product (GDP) recorded its second consecutive negative growth in real terms, from -6.10 per cent year-on-year (YoY) in Q2 2020 to -3.62 per cent YoY in Q3 2020. Although this represents an improvement of 2.48 percentage points in comparison to the growth rate recorded in the preceding quarter (Q2 2020); negative growth rates in two consecutive quarters translate to a recession in Q3 2020. 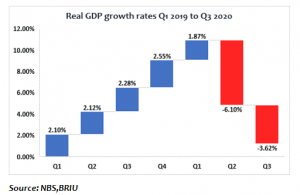 Source: NBS,BRIU
The underperformance of the economy in Q3 2020 reflected the adverse effect of the restrictions on movements and economic activities implemented across the country in early Q2 in response to the COVID-19pandemic. In comparison to Q2 2020 where 13 economic activities recorded growth, 18 recorded growth in Q3 2020.
While Q3 2020 real GDP stood at N17.82 million, aggregate GDP stood at N39.09 million in nominal terms. This represents a decline of-3.62 per cent and an increase of 3.39 per cent respectively from N18.49 million and N37.81 million recorded in Q3 2019.

Read Also: Knowing which stock to avoid investing in this recession

Meanwhile, before Nigeria entered recession in Q3 2020, the economic environment has been in stagflation, fueled by a high unemployment rate and continuous rising inflation rate. Available employment data for Q2 2020 from NBS shows that about over 21 million people (27.1 per cent of the labour force of 80.3 million people) in Nigeria are unemployed, compared to the 23.1 per cent unemployment rate out of the 90.47 million labour force in Q3 2018. This figure exceeds the population of 35 countries out of 54 in Africa. 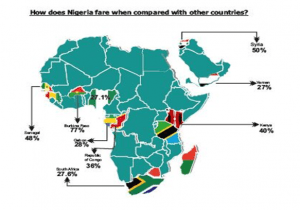 Source: BusinessDay Unemployment report 2020
Within the reviewed period, about 10 million Nigerians have become unemployed. More specifically, 1 in every 4 persons in Nigeria is unemployed. This figure would further raise the poverty line which is at 40 per cent (over 80 million) of the population.
Another major driver of stagflation is Inflation. Nigeria’s inflation rate rose to 14.23 per cent YoY in October 2020, the highest recorded in 31 months, since March 2018. This rate is 0.52 percentage points higher than the 13.71 per cent recorded in September 2020. Inflation affects the real value of money, hence, a constantly increasing inflation rate will lead to a constantly decreasing purchasing power of consumers. 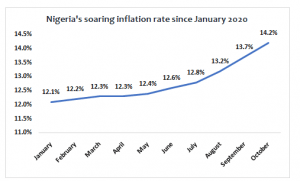 Source: NBS,BRIU
What factors drove the economy into recession?
Among other factors that have dealt the Nigerian economy a great blow is the coronavirus pandemic, the umbrella factor that led to the recession, specifically with two not mutually exclusive events—the lockdown and the fall in the prices of crude oil.

How does this affect the oil sector?
China, the world’s largest importer of crude oil, accounts for about one-third of the global oil demand every year. Due to the lockdown, in the wake of COVID-19, China’s demand for oil plummeted. In a bid to keep oil price, OPEC and non-OPEC countries met to lower their total crude production but Saudi Arabia and Russia did not yield. The continuous production led to an oil price crash, as low as about $18 per barrel in April 2020.

The GDP data revealed that the oil sector contracted by 13.89 percent YoY in Q3 2020. The contraction represents 7.26 percentage points lower than the growth (-6.63) recorded in Q2 2020.
The lockdown
As the pandemic bit harder, the government reacted swiftly by putting in place policy measures to curb the spread of the pandemic. One of these measures is the lockdown. The imposition of the lockdown consequently reduced demand, albeit, there is abundant supply as companies that already produce could not sell.

While businesses resolve to cut costs, the fear of a recession raised the probability of entering a recession as consumers withheld more money than they would spend, while producers cut operating costs to help weather the expected decline in demand. These affected several things, even unemployment. The production cuts led directly to lower wages and lowers demand, increasing the likelihood of entering a recession.

Banks’ non-performing loans, PAT and others in Q3 2020

Products, commodities that will shape African trade as AFCFTA takes off