In the coming months, the majority of companies serving the general public will increase prices. The current economic situation in the country and the world at large is a cue to possible hikes in the value of services.

One of the major reasons there will be inflated prices of services provided in different sectors is the sharp upstreak in the price of Automotive Gas Oil (AGO) or diesel across the nation, and this product is used by almost every organisation or industrial household that runs on power or energy.

Assessing good power supply in the nation has proven futile over the years, and this has the ability to run down the effectiveness of work and machineries that are carried out, as the case may be. Although such events have led organisations and individuals to introduce the concept of artificial energy or power supply, one of these is the electric generator, which generates power at the expense of diesel, or AGO.

Recall that the oil and gas sector, in which diesel is a product of value, is a Nigeria’s economy dependable. That is, the economy of Nigeria yields an increase or fall based on the earnings of the oil and gas industry at this time.

However, the power supply in the nation is generally low. There have been numerous (up to 12) collapses of the national grid in 2022 alone, which also is a cause of the inflated prices of generators, as a reason of higher demand, although that is not the exact information in this report.

The living standards of many will be affected in coming months. It has started already. Over 200 million citizens and 65 percent of consumers use transportation, health care, industrial buildings, banking sectors, and other services on a daily basis. 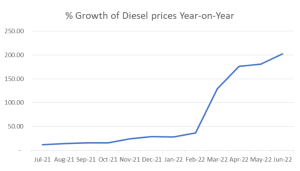 The agriculture sector, simply put, is the consumer goods industry that generates services for citizens daily around the nation and world at large. They function on the use of energy with diesel in their generators. The higher cost of diesel will result in more expenses, leading to an increase in the prices of products supplied to consumers.

This is also the same for banking sectors, which offer daily services to large numbers of citizens. The equipment in banks’ offices is 80 to 90 percent automated and will function better with efficient electricity. Because of this stance, most banking halls and offices run better on diesel, though some of these companies are now using solar energy in order to save money.

This is a period where not only diesel is scarce, some other major petroleum products are in dire demand, and prices are inconsistent.

BusinessDay’s Research and Intelligence unit (BRIU) discovered that the average price at which diesel was sold in H1 2022 was N533.12 across the nation, an increase of 102.3 percent higher from the average price in the last half, H2 2021. The diesel price, which increased the most month-on-month from H2 2021 to the end of H12022, will cause more services, particularly from sectors that are vulnerable to inflated prices or organisations that are affected by service prices.

It is imperative to know that the spike in the price of diesel will not only cause a decline in the standard of living across the nation. The development of diesel prices causes the purchasing power; currency buying power to decline. This means as the consumer price index of more items is inflated, there will be a higher decline in the standard of living.

Not only will the standard of living be affected, but the investment projections may also become unrealistic and may cause a lag in the responses to be generated by investors in different sectors.

The purchasing power, if well protected, keeps the economy more stable both in micro and macro aspects of the economy. 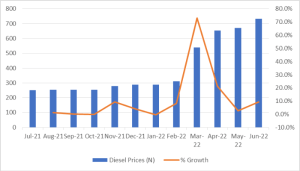 G5 Governors will continue to push for equity, justice in PDP, says Ikpeazu