You are not in tune with reality in Oyo, PDP knocks APC candidate in 2019 election, Adelabu 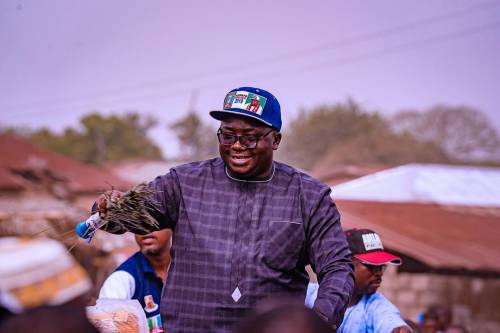 Oyo state chapter of the Peoples Democratic Party (PDP) on Sunday berated the All Progressives Congress (APC) candidate in the 2019 guber poll that state has retrogressed under Governor Makinde in the last one year.

The umbrella party in the pace setter state knocked Adelabu for discrediting Governor Seyi Makinde’s performance in the last one year in office saying “it show he is ignorant and confirmed of being disconnected from reality”..

The ruling party in Oyo state described Adelabu’s comment on a live Ibadan based radio program, that Oyo state in the last one year under governor Seyi Makinde led government was retrogressing as untrue and deliberate misrepresentation of information aimed at garnering political relevance.

In a statement signed by the state publicity secretary, Akeem Olatunji, and made available to journalists in Ibadan on Sunday said that it was unfortunate for the ex CBN deputy governor to deliberately misrepresent obvious fact just to sway the unsuspecting members of the public to be sympathetic to his failed political course.

The Oyo PDP described the “APC as a bad and rejected product that nobody takes seriously anymore having failed in government in the last eight years and plunged the state into a staggering debt profile of over N150b leaving the government of Seyi Makinde with no choice but to clean up the mess and rots APC government left behind”.

The statement reads in part, “our attention has been drawn to some outburst of Bayo Adelabu while featuring on a live program of Ibadan based radio station on Saturday, where Chief Adelabu in his usual self further exposed his ignorance of government workings.

“Ordinarily, we would not have concerned ourselves with such outburst or dignify such comments with our response but it is imperative to address some key areas the APC chieftain talked about ignorantly in order to guide unsuspecting members of the public against agents of deliberate misinformation.

“Adelabu alluded to a baseless submission that Oyo state was moving backward under Makinde led government but failed to acknowledge the improved standard of living and the quality of life in the state brought about by the PDP led administration.

“We need to remind Oyo state chapter of APC and its chieftain that the essence of government is to impact lives of the people it governs positively and anything short of improved standard of human lives implies failure on the part of government which was why many in the state have tagged Seyi Makinde as face of qualitative leadership in Nigeria.

“It is on record that governor Makinde presented a clear and unambiguous blueprint to the people of the state upon assumption of office which include the four cardinal points such as free and quality education, quality healthcare system, security, development of physical infrastructures, and economic development through Agribusiness revolution.

“It will only be fair for the Oyo APC and Adelabu to be properly guided by the blueprint of the governor in making assessments and remarks before it turns its party to a political subject of ridicule in the state.

“It is unfortunate that even when many residents in the state across religious and political party lines are equating APC’s eight years in office to Makinde’s one year in office in the face of irrefutable facts Chief Adelabu in his quest to garner cheap political relevance was busy downplaying the giant strides of a performing governor.

“We urge Adelabu and the entire Oyo state APC to conduct itself properly as an opposition rather than projecting itself as an enemy of progress because each time it came up with the narrative of taking draconian decisions to show might, the opposition was merely playing the distractive agent but we as the ruling party understand all the gimmicks of Oyo APC.

“We will not be distracted by the opposition’s political gimmicks, we are more focused, committed, and dedicated to improve the peoples welfare and to take Oyo state to its deserved enviable height among committee of states in Nigeria while we urge APC to be more organized and constructive in its approach to playing opposition.

We’re working group on self sufficiency in sugar production-RMRDC