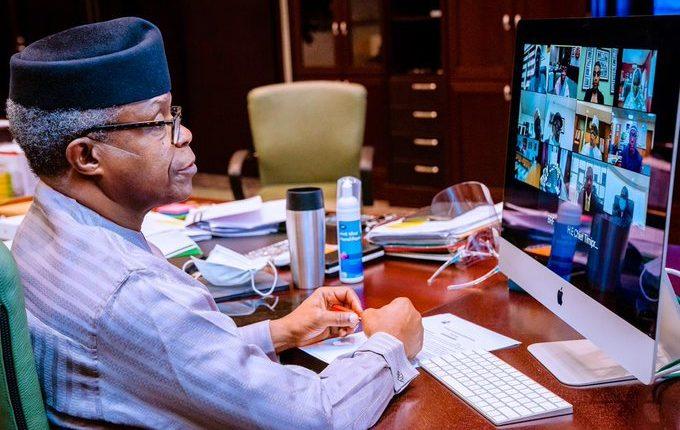 Vice-President, Yemi Osinbajo on Saturday was at the Oluyole Estate, Ibadan residence of the former governor of Oyo State, Abiola Ajimobi on a condolence visit.

Osinbajo, who came in company with his wife, Dolapo, and son, Fiyin, arrived at the residence of the deceased around 4:25 pm.

Also with the Vice President was the Deputy Governor of Oyo State, Rauf Olaniyan, and other government functionaries

The vice president described the deceased as a quality bridge builder whose contribution would be sorely missed, the Vice-President, urged the political class to emulate his virtues.

He said his death came as a big loss to the party and the nation as a whole.

According to him, late Ajimobi’s spirit of compromise, brotherhood, and unending desire of seeking everyone to work together, would be a guide and direction for the party and the country for years to come.

He added that his death was more painful considering the fact that his contribution was most needed at this period.

Aside from the fact that I regarded him as a very dear older brother, he said he was a major bridge builder in the party.

“He was someone who could mediate practically in any dispute by not just bringing humour but also light and direction. For us, it was a very major loss, especially at this time.

“So, it’s a great loss but we thank God that he lived and did all that he did and that he has left an incredible memory and incredible legacy for us.”

Osinbajo however urged Ajimobi’s widow,  Florence, the children, and the entire Ajimobi family to take solace in the fact that he bequeathed to them a good legacy.

The VP visited the family of the deceased 41 days after the former governor’s death.

They departed the residence of the late deputy National Chairman of the All Progressives Congress, at 5:02 pm.