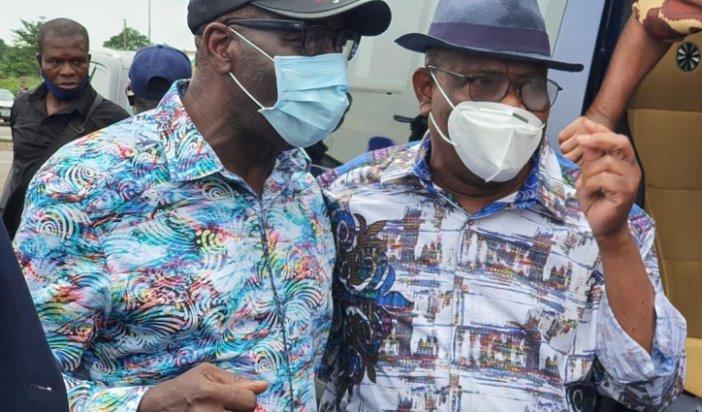 Ondo state chapter of People’s Democratic Party (PDP) is in high celebration with the victory of Governor Godwin Obaseki in Edo state against his closest rival, Ossgie Ize-Iyamu of the All Progressives Congress (APC), saying a repeat of PDP’s victory is possible in October 10th governorship poll in the state as people are tired of APC.

This is coming against the backdrop of jubilation and celebration of some PDP members in some pub houses and on the streets in Akure, Ondo state capital on Sunday, saying, “we are going to use APC brooms to sweep away the party from the state as PDP’s umbrella is big enough to accommodate as many people as possible to jointly fight hardship created by APC.”

Recall that the Independent National Electoral Commission (INEC) on Sunday afternoon declared Governor Godwin Obaseki of PDP the winner of the recently- concluded governorship election in Edo state, having polled 307,955 votes against his closest rival, Osagie Ize-Iyamu of APC, who polled 223,619 votes.

Speaking in Akure on Sunday through a Press Statement issued by PDP through Kennedy Peretei, its Publicity Secretary, said, “the election was a straight fight between “Federal might” and the “People’s might”. Expectedly, the people triumphed. We congratulate the Edo people for their doggedness and rejecting godfathers who wanted to make Edo State, an extension of their business and political empire.”

PDP in a statement tagged “Godwin Obaseki’s Victory, An Elixir for Ondo 2020”, added, “There is no doubt, this victory is not only for Obaseki and PDP family, but also a good omen for October 10 Gubernatorial election in Ondo State. Our hope is rekindled and our energy revitalised.

The PDP, wishes to appreciate the Independent National Electoral Commission (INEC) for not subverting the wishes of the people. In spite of isolated cases of non compliance, the outcome of the election is a reflection of what the people wanted.”

On its own part, the Director of Media and Publicity, Zadok Akintoye of PDP in Ondo state, also said, “the victory of PDP in Edo state just concluded governorship election between the APC candidate showed that people have been rejecting the bad governance being experienced by the APC ruling government of President Muhammadu Buhari since the last five years.

“What we saw in Edo state is the reflection of people resolved from the hands of APC bad government. We congratulate the good people of Edo state, our great party PDP and Governor Godwin Obaseki and our prayer is that the victory we have recorded in Edo state should come to Ondo state come October 10, governorship election.

“What we see in Edo will replicate itself in Ondo state with the collective supports of Nigerians that want people- oriented government. Our power and confidence is in the people, not in any ‘federal might’, this is the (APC) government that has mortgaged the lives of Nigerians which must be resisted.”

Meanwhile, Eyitayo Jegede, governorship candidate of PDP in Ondo state, was on Sunday, took his campaign train to Owo, in Owo local government area of the state, the home town of Governor Rotimi Akeredolu of the ruling All Progressives Congress (APC), appealing to the people of the town and Ondo state in particular, to eschew violence and vote, not fight in the coming governorship election.

Jegede, who led his campaign team to the Palace of Olowo of Owo, Oba Gbadegesin Ogunoye on the occasion of Ero and Igogo festivals being held in the ancient town, pleaded with the monarch to prevail on some politicians with violent tendencies to retrace their steps.

He said, “I want to plead with you, our fathers, to help appeal to these politicians to eschew violence and abstain from any act that can result in shedding of blood before, during and after the election.There is no election that is worth violence or bloodshed because election should not be seen as a do or die affair at all.”

Responding, the Olowo, Oba Ogunoye, commended Jegede for the visit and said, “No doubt, we know you are our own. We have heard a lot about your good behaviour and the consummate manner you have been relating with people.

“As we are preparing for the forthcoming gubernatorial election, my candid advice to the politicians is that, they should allow the public to decide who governs them and not through coercion.

“You are a true son of the soil; so you are eminently qualified for the position (of governor). Let’s leave everything for God to handle and allow peace to reign in Ondo State,” the monarch counselled.