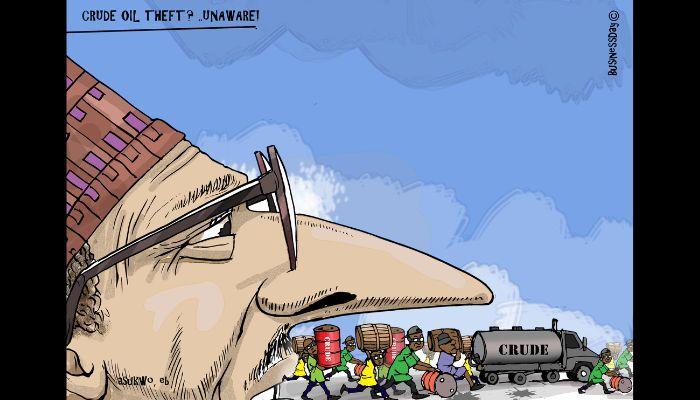 The minority caucus in the House of Representatives said it is alarmed by the massive oil theft in the country, which has become an “organised racket under the corrupt, reckless and extremely decadent All Progressives Congress (APC) administration.”

The caucus said it is also disturbed by reports of alleged complicity by certain corrupt government officials as evinced in the clandestine entrance and berthing of a 3-million-barrel capacity super tanker, MV. Heroic Idun in Nigerian waters to criminally load millions of barrels of stolen crude oil from our country.

It stated that such reported complicity is also evidenced in the failure of the Nigerian authorities to effectively intercept and arrest the criminal tanker and its crew, which successfully left the Nigerian waters, only to be apprehended by the Equatorial Guinea Navy.

The opposition lawmakers gave these indications in a statement signed by Ndudi Elumelu, minority leader of House of Representatives made available to journalists in Abuja on Saturday.

Elumelu said official reports have indicated that, oil thieves are having a field day stealing up to 400,000 barrels of crude oil every day, amounting to a daily siphoning of about $40m (given the current average global oil price of around $100 a barrel) accrued revenue meant for the wellbeing of Nigerians.

“This shocking development underscores the massive sleaze in our nation’s oil and gas sector under the APC administration, with consequential crippling effect on our overall national economy and social wellbeing.

“Our caucus is saddened because such enabled sleaze is responsible for the crippling of our production and services sectors, massive unemployment; collapse of our critical sectors including education, health and power; unbearable infrastructural stagnation and escalated insecurity with attendant excruciating hardship on our citizens.

“The Minority Caucus, standing with Nigerians, demands for an immediate, independent and open investigation into the issue of oil theft in the country with particular refence to the circumstances that facilitated the reported illegal operation by MV Heroic Idun as well as its escape from our waters.

“Who granted the vessel entrance into the Nigerians water? Who granted it facilities to illegally berth and pump stolen crude oil? What circumstances facilitated its escape from the Nigerian waters? Who is the vessel working for and who are those behind the illegal operation?

“The Minority caucus commends the patriotic officers of the Nigerian Navy for their collaboration with Equatorial Guinea Navy to effect the arrest of the criminal vessel and urges such officers to assist in ensuring that those behind this repulsive crime against our nation are all brought to book.

“Our Caucus also urges President Muhammadu Buhari to, in the interest of suffering Nigerians, rise to the occasion and take urgent step to halt the haemorrhaging of our national economy through crude oil theft,” the statement read.