Edo: What I told Obaseki – Wike 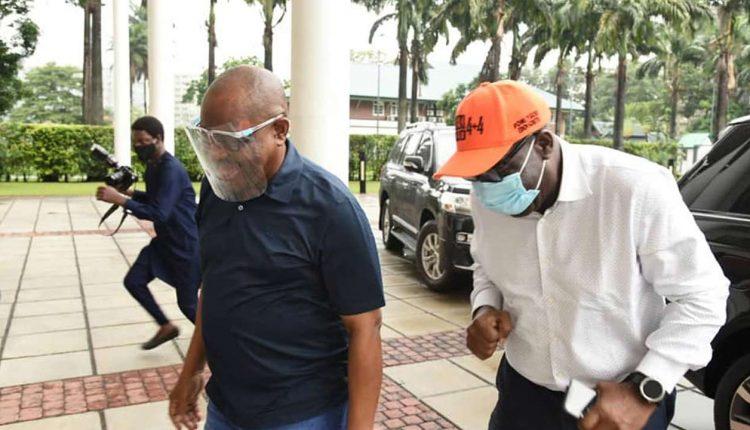 Gov Nyesom Wike of Rivers State has revealed part of what he told Gov Godwin Obaseki of Edo State who visited him and Emmanuel Udom of Akwa Ibom State last weekend. He said the Peoples Democratic Party (PDP) o which Obaseki decamped is happy to take another state from the All Progressives Party (APC).

Gov Wike who spoke in a television programme at the weekend said he advised Obaseki to always seek to get more people behind him by carrying everybody along. He said: “I have always said that politics is where you must carry every body along. Sometimes there can be disagreements but the ability to reconcile everybody is important; particularly as an opposition party.

“It is healthy to have division. There is no need to make people think that you don’t want them.  I told Gov Godwin Obaseki so and anybody who knows me understands that I am not against anybody.

“After the primaries now, everybody is very happy and Gov Obaseki is at home. If we have allowed what was going on then to continue, you will be alarmed at the level of division that will erupt and it will be like what you see in APC.

The Rivers state governor pointed out that PDP is happy to have resolved the disagreement that ensued in Edo state before the governorship primaries, which has eliminated litigations.

He said when the interest of every party member is protected, nobody would feel aggrieved and the party would continue to remain united.

“As a loyal party man of the South-South region, I would want the whole region to belong to one political group which is what it is likely to be. If APC is in crisis, it’s not my business to help it. Remember, we also had our own crisis under Ali Modu Sherrif and they were jubilating. As a politician, I am happy that we have taken one more state from them. I will continue to pray that they make more mistakes”, he added.

On the threats by a section of the Rivers APC over rampant and always unfavourable court judgments in Rivers State against their faction of the party, Gov Wike decried what he called unfortunate silence of security agencies in apprehending those that threaten to destroy the state.

Sokonte Davies, former executive director (finance and administration) in the Nigerian Maritime Administration and Safety Agency (NIMASA) had said his followers would be ready to die or live with anybody procuring any court order to expel the transportation minister, Chibuike Rotimi Amaechi, from the party. Amaechi had swiftly appealed to anybody who called himself his follower not to ever resort to violence to defend him, but reacting in a television interview, Gov Wike said the threat by a pro-Amaechi group did not seem to mean anything to security agencies.

He recalled that these same APC supporters threatened and actually attacked the Rivers State High Court because of internal party squabbles and that the security agencies did not bring the perpetrators to justice.

Gov Wike said the pro-Amaechi supporters were courageous because their pay masters may have assured them of security cover. “I will not go to court against anybody because the threat is in the public domain. It is obvious that they have the Police, Department of State Security, Air Force, Navy and the Army; otherwise,  how do you explain the long silence of the Nigeria security agencies over such threats already trending  online. For whatever reasons, why won’t they bother about the person making such threats because of an internal problem within APC?

“Remember, for the first time in the history of this country when Chibuike Amaechi was governor, he shut down the courts for two years.  Based on that experience, more threats and attacks are seen.

“The minister is now coming to say that he is not a man of violence which is not true. We are not children to be so deceived. During the campaign leading to 2019 elections, he came to the state chanting war songs and nobody cautioned him”.

He said because the heads of the security agencies cooperated with him to save lives in the state they were all transferred and that has instilled fear in their successors.

“I have said it always, that governors are not the real chief security officers. They are only chief logistics officers of their states providing funds for security agencies’ operations.

“For us, we are talking about Covid-19 pandemic which is commonplace across the country. The safety of the people is paramount and we signed an Executive Order but a deputy commissioner went ahead to flout it.

“In fact, the commissioner of police was transferred, including the director of DSS and the Air Force Commander because they worked with me to enforce COVID-19 protocols. The new people they have sent are also afraid. Such double standard in this country is not healthy”, he emphasised.

Gov Wike called on Amnesty International to be objective in their activities and stop labeling states with alarming reports.
He described as incorrect the figure of deaths in the state as a result of cultism which was published by the institute, saying that cultism has been fought to a standstill in Rivers state.

“Why are they not talking about the insecurity across Nigeria, particularly the killings done by bandits in some states? Is it because those states are controlled by the ruling party?

“Today, Rivers state is comparatively fairing well. We have fought cultists to a standstill. But you can not say that is the case in Nigeria as a whole today. What has Amnesty said about killings by bandits in other states?

“If there is insecurity, you can’t see the level of infrastructural development activities going on in Rivers state. Multinational companies like Julius Berger, Setraco and CCECC are here working and none of them is affected by insecurity. Residents know that the state is moving on very well”, he said.