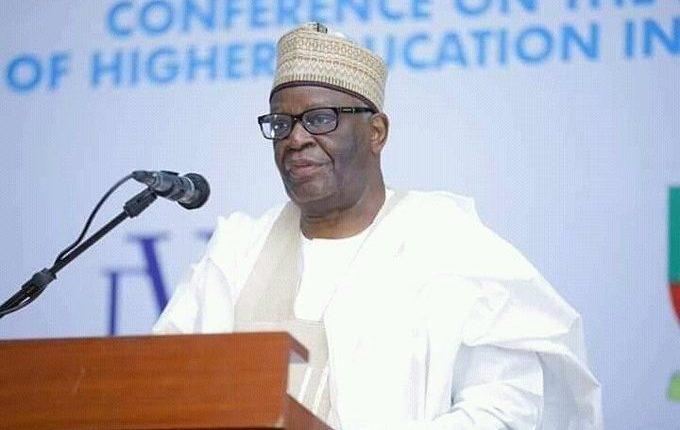 Against all permutations on the likely replacement of the late Abba Kyari, chief of staff to President Muhammadu Buhari, the President left many speculators tongue-tied as he announced Prof. Ambassador Ibrahim Gambari, a Nigerian scholar-diplomat, as his new Chief of Staff.
Shortly after the demise of Kyari, speculations were rife that Buhari was likely to choose among some familiar names in the corridors of power. Among the names that featured were those of Babagana Kingibe, Hamid Ali, Adamu Adamu, Boss Mustapha, Nasir El-Rufai, Ismaila Isa Funtua, Buba Marwa, among others.

It was also touted that the President was not likely going to announce Kyari’s replacement until the 40 days of mourning in line with Muslim rites were over.
Another school of thought had also said that such an announcement would not come until after the Ramadan period currently in place.
But the announcement yesterday has put to rest all permutations.

Gambari, BusinessDay gathered, would be officially inaugurated today.
By selecting the diplomat, President Buhari must have found in him some qualities that were in the late Kyari and strongly believes also that he would deliver good.
Recall that Buhari so relied on his late CoS that he almost handed to him the reins of power, making the man assumed so much power as if he were a prime minister in a presidential setting.
At his death, Buhari declared: “Kyari was the very best of us, a loyal friend.’

The man Gambari
He was the first Under-Secretary-General and Special Adviser to the Secretary-General on Africa (1999-2005). In that capacity, he worked closely with heads of government, key policymakers as well as institutions in the continent to develop the New Partnership for Africa’s Development (NEPAD). During this period, he was concurrently the Resident Special Representative of the Secretary-General and Head of the United Nations Mission to Angola (2002-2003). He has been a delegate to the Assembly of the African Union as a national delegate (1984-1985) and as a member of the UN Secretary-General’s delegation (2000-2012).
Ambassador Gambari, is currently the Founder/Chairman of Savannah Center External link in Abuja, Nigeria, a think-tank for research, training, and public policy debate on the nexus between diplomacy (conflict resolution), democracy and development in Africa.
His last assignment at the United Nations was as the Joint Special Representative of the Secretary-General and Chairperson of the African Union Commission/Head of the UN and AU Hybrid Mission in Darfur (UNAMID) from January 2010 to July 2012. During Ambassador Gambari’s tenure, UNAMID was the world’s largest international peacekeeping mission.

The Ambassador has held several leadership positions at the national, regional and international levels and has built extensive contacts with governments as well as public and private institutions, especially in Africa.
He was the Chairman of the United Nations Special Committee Against Apartheid (1990-1994) during which he worked closely with African governments to coordinate UN policy to eradicate apartheid, thereby building trust and confidence with governments and policymakers in member countries of the Southern African Development Community (SADC).
At the global level, Gambari was Under-Secretary-General and Head of the United Nations Department of Political Affairs (2005-2007). In that period, he also operated as UN Secretary-General’s Special Envoy on Cyprus, Zimbabwe and Myanmar. On 22 May 2007, the Secretary-General entrusted him with the Good Offices Mandate on Myanmar. He was also appointed in 2007 by the Secretary-General as Under-Secretary-General and Special Adviser on Iraq Compact and Other Issues, positions he held until 2009.

Before joining the United Nations, he served his country as Ambassador and Permanent Representative of Nigeria to the United Nations (1990-1999). He was also Minister of Foreign Affairs of Nigeria (1984-1985) and worked closely with regional leaders, institutions and governments, particularly within the Economic Community of West African States (ECOWAS) on the economic and political development of the sub-region.
He was born on November 24, 1924 in Ilorin, the capital of Kwara State. He will be 76 years old in November.
He attended King’s College in Lagos then proceeded to the London School of Economics where he got a degree in Economics.
For his Masters and Doctorate Degree, he attended Columbia University. He majored in Political Science and International Relations
He was the Minister for External Affairs between 1984 and 1985 under the then military Head of State, Major General Muhammadu Buhari.
In Nigeria, Prof. Gambari was also a lecturer at the Ahmadu Bello University, Zaria.
Professor Ibrahim Gambari was the pioneer Chancellor of the Kwara State University. He was appointed in 2013 by former Governor, Abdulfatah Ahmed.

I am surprised that Buhari is appointing such a person at that age for the position, it is a sensitive position that would have been befitting for a younger person in his 50″s.
I am not saying he is not qualified, I know him well; we were in 2014 confab together he has the experience, I just would have just preferred a younger person, the President knows better, ” Oshun said.
Also speaking Yinka Odumakin, Publicity Secretary of Afenifere, described Gambari’s appointment as part of plan to impose the northern agenda on Nigerians.
Odumakin said based on his antecedents, he does not trust Gambari to be fair when necessary, stressing that he had not always been with Nigerians.
I don’t trust him, it is all part of plan to impose and continue what they have been doing, impose their northern ethnocentrism.
In 2014 at the national confab after a committee was set up to resolve a dispute and recommendations was made. He was mandated to read the recommendation which was necessary because the confab was about breaking because of that disagreements.

You can’t believe that he went ahead and read something else that had been resolved earlier and reneged,” Odumakin said.

Why investors prefer Egypt to Nigeria amid coronavirus pandemic

IWA calls on southern governors to protect citizens, territories from influx of…

Obaseki: Stepping into the ring armed with sterling…