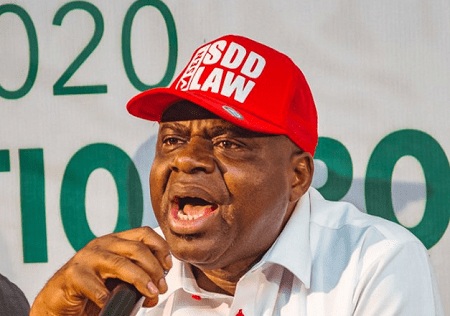 The Bayelsa State chapter of the Peoples Democratic Party (PDP) has vacated its state secretariat along DSP Alamieyeseigha Way, Yenagoa, without settling its rent arrears amounting to N105 million over the past six years.

A state High Court sitting in Yenagoa had on June 18 this year delivered a judgment asking the leadership of the party to pay the outstanding rent in a suit brought by the landlord, Chubby Ben Walson.

The two-storey building with six wings has been used by the PDP as its state secretariat since 2008 until the landlord raised an alarm over the refusal of the party to pay him the outstanding six-year rent.

Speaking to journalists in Yenagoa on Sunday, Walson said: “After the judgment, the party through one of its executives approached my lawyer on how to settle the debt, only for me to realise that the party was just buying time to vacate the building without settling the debt.

“The party state chairman, Solomon Agwana, and secretary, Gesiye Isowo, have written to me stating that they are officially vacating my property after destroying same.

“In the said letter, the party admitted that they have been in occupation of my property from August 1, 2008 till date and yet have wickedly refused to pay me the due rent for the past six years.

“PDP refusing to pay me my due rent is simply the story of callousness and wickedness; that is the property they have been occupying to record several electoral victories in Bayelsa State.

“I will still take steps to seek redress for the damage and destruction of my property and PDP should not in any way wail or bemoan their fate if the law of karma visits them.”

A copy of the PDP letter to the landlord made available to BusinessDay in Yenagoa was signed by the state chairman, Solomon Agwana, and secretary, Gesiye Isowo.

“This is to officially notify you that we have vacated your property that is situated along Alamieyeseigha Expressway, Yenagoa, Bayelsa State, that you entered a tendency agreement with Chief Rufus Abadi, the erstwhile party chairman, on 1st of August, 2008 wherein he now offered the property to the party. That from 1st August, 2008 till date PDP had been in occupation of the property,” the letter read in part.

“We humbly ask that you take possession of your property from the date of your receipt of this letter as we are no longer interested in occupying same,” it read.