Whenever he shoots, he never misses his target. There is no babbling or stammering whenever he addresses the knotty issues plaguing Nigeria. He says things as they are. He does not suffer fools gladly. Peter Obi strongly believes Nigeria is rudderless and the inability of government to see the danger ahead irritates him to no end. At every opportunity, Obi tells Nigerians how sad he is at the way the business of governance is being handled. He has on many occasions and fora condemned the level of corruption in government and the acquisitive spirit of politicians in power.

At a forum, Obi had also said that no matter the kind of plans one puts or has in Nigeria, with the kind of leaders the country has, nothing good would come out of it.

He insisted that there must be a leadership overhaul from the federal to states and down to the local government. “Our leadership selection must change,” Obi said emphatically.

On the governance structure in Nigeria, he advised that the country needed to look out for a new political arrangement that would decentralise the power of the Federal Government.

Sometime ago, while reacting to a comment made by the United Kingdom Trade Envoy to Nigeria, Hellen Grant that Nigeria was the fastest growing economy despite the recession, Obi said: “Well you know I am a trader in Onitsha. I don’t listen to those comments by the World Class people because, actually, most of them don’t even know what is happening. I operate in the market and I can tell yes, the economy is thriving from their own perspective, but I am telling you that most of the micro, small and medium businesses have collapsed; those that have not collapsed are actually on life support. Something needs to be done to pull them out of death. We now have to move the economy from consumption to production.”

Obi, a former vice presidential candidate of the People’s Democratic Party (PDP) in the 2019 general election, took the government to task and engaged them in a debate over the real cost of vaccines.

Whereas the Health Ministry said that Nigeria needed a whopping sum of N400bn, Obi insisted it did not need more than N150billion to procure the Covid-19 vaccine.

Obi made the observation when he featured on ARISE Television, touching on other sensitive matters in the polity He emphasised that there are issues of transparency regarding the procurement of vaccines.

Osagie Ehanire, minister of health, in December 2020 had said that the federal government needed about N400 billion for the vaccines.

According to Ehanire, N400 billion would be required to vaccinate 70 percent of Nigeria’s over 200 million population, at $8 per person.

But Obi said that Nigeria would not have needed to spend so much in procuring vaccines if its National Vaccine Production Facility was operational.

“The issue of vaccine is one that I feel a sense of pain. Nigeria as a country in 1940 established what we called National Vaccine Production Facility domiciled in Yaba, and that was able to produce virtually all the vaccines we used in the days of smallpox, yellow fever, and that facility was shut down in 1991 to be refurbished and upgraded, there was nothing wrong with it,” Obi said.

“And till today that has been the case deliberately so that people can import vaccines and sell to the government.

“Now I hear that we are looking for N400bn. Well, I am at loss. Our budget this year for health is N547bn. I don’t know if they are going to take this vaccine procurement from it, because if they do, we are left with N147bn,” he said.

According to Obi, who was a former governor of Anambra State, said: “For the vaccine procurement also, we need to have transparency in the procurement. Today, vaccine in India costs between $2 25 cents to $3. That is an average of $2.75 and if you say you are going to use N400 billion, that is about $1bn. If you divide $1bn by $2.75cents each, that is about 350 million doses which is far in excess of what we need. 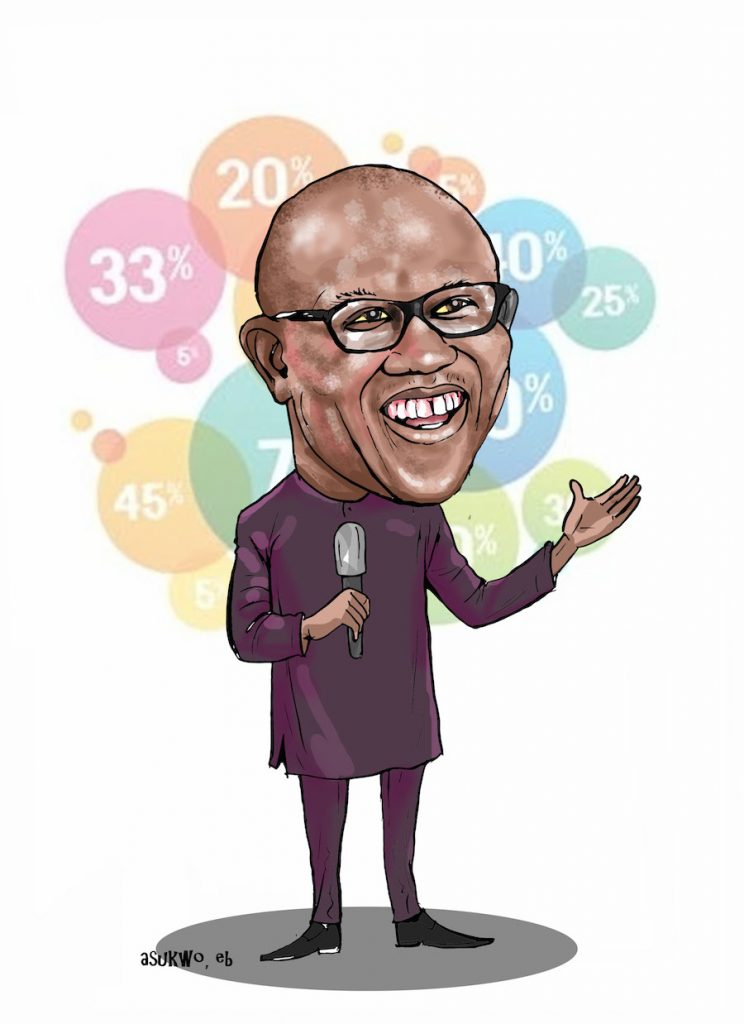 “World Health Organisation said if you can inject 70 percent of your population, that’s it. 70 percent of Nigeria is about 140 million so we are actually looking for 140 million doses. Considering that some other people are going to give us some free, we actually don’t need more than 120 million. But even if we’re buying 140 million, we just need about three hundred and eighty-something million dollars which is about N150bn to buy it.

“If they have a N400bn budget to buy the vaccine, my suggestion, they don’t need to award contracts in this vaccine, let them just call Serum institute in India and plead with them. I am sure they will even give us discount. If they want I can go for the negotiation. It won’t cost more than $2 each.”

He also faulted FG’s Poverty Eradication Strategies, explaining why the cash transfer strategies employed by the government at the centre to lift people out of poverty, will not work out in Nigeria.

According to him, the planned N5000 disbursement to 24 million people for a period of 6 months will not achieve the desired results of pulling people out of poverty.

He argued that for one to be classified as living in poverty, the person will be earning $1.9 or less per day, which is approximately N800. He said that the N800 when multiplied by 30 days amounts to N24,000, thus giving someone N5000 a month, when he needs at least N24,000 to survive, will have little or no effect, talk more of pulling them out of poverty.

“Any government that desires to pull its people out of poverty should adopt a properly articulated fiscal and monetary stimulus to support micro, small, medium entreprises and also provide jobs that will pay people at least N25,000 per month”, Obi submitted

Telling of his experience in Bangladesh where some aggressive poverty eradication strategies worked well, Obi said “In 2008, I travelled to Bangladesh, with a team of professionals, where we studied poverty eradication strategies as employed by their government. We had encounter with the locals in rural areas, and we saw firsthand the techniques they employed to pull their people out of poverty.

“They had micro credit facilities at the rural level, supervised by the government but driven by the private sector. These credit institutions support the locals in their trades and agricultural endeavours. The government also steps in to buy whatever is produced by the rural residents, which are in turn exported.

“The consequence of this is that as of 2008 when we were there, the per capita income of Bangladesh was $635. Today, after 12 years of aggressive poverty eradication, their per capita income is $1900. Their literacy rate was 58% in the same 2008; today, they are at 75%. Their human development index (HDI), has also moved from low to medium.

The former governor of Anambra State said that apart from Bangladesh, there were many other countries that have followed that same poverty eradication model and moved their citizens out of poverty. He said it would be wrong for the Federal Government to simply decide to pay 24 million people N5000 each for 6 months, hoping that it would be enough to pull them out of poverty.

Obi said what is more worrisome about the whole cash transfer project is the lack of transparency and uncertainty that has characterised the whole process. He urged the government to invest in critical areas of development if they truly desire to move people out of poverty. He said that supporting small businesses with fiscal and monetary stimuli will be more effective in eradicating poverty in the country.

He also did not spare government on the rising spate of insecurity across the country.

He decried the worsening level of insecurity in Nigeria, while calling on the newly appointed service chiefs to rise to the challenge and secure the nation.

Obi lamented that the alarming level of insecurity in the country not only negatively impacted on national development, but equally affected the quality of human life.

Obi called on the newly appointed service chiefs to aggressively tackle the menace of insecurity ravaging different parts of the nation.

“One of the most urgent issues we need to address in this country is the issue of insecurity. Aside from scaring away the much needed Foreign Direct Investment, high levels of insecurity as we have today, discourages local investors from driving the economy forward.

“No rational investor will invest in an unsecured environment, no matter how profitable the business may appear, because you need to be alive to enjoy the proceeds of your investment. So we must fight insecurity to a standstill, to be able to drive the nation forward”, Obi stated.