You need to active Javascript on your
Opinion dairy import,dairy industry

Making a case for the development of the Nigerian Dairy Sector

Halima is an adolescent girl who lives in a pastoral community in Northern Nigeria. Each day she wakes up at 5:00am to help her mum with house chores and to milk her father’s cows. At 7:00am, instead of going to school, Halima departs on her hawking route, to sell fura da nono and maishanu (locally processed raw milk products), making between N500-N1,000 per day. She usually returns late in the afternoon, in time to help her mother prepare dinner for the family. Halima wants to go to school, but formal education is out of reach as her parents cannot afford it and need the income she contributes daily, though it is meagre. Also, every year the entire household migrates from the North to the South in search of pasture and water. This will be Halima’s routine until she is given away in marriage. Halima is not alone. Millions of women and girls from pastoral communities in Nigeria are engaged in the informal dairy industry. Despite the labor-intensive nature of the work, the financial rewards are insufficient and will not move smallholder pastoralists out of the bottom of the wealth pyramid.

This sad reality can be avoided if the Nigerian dairy sector is developed further. Nigeria has over 180 million residents, consuming about 1.3 billion tons of milk annually. This is a huge market for locally produced milk and dairy products. Unfortunately, about 60% of dairy products consumed are imported. According to the Central Bank of Nigeria (CBN), Nigeria spends between $1.2 billion and $1.5 billion annually importing milk and dairy products. This huge import bill contributes to food insecurity and is one of the reasons behind the CBN’s decision to add milk imports to its restricted list for foreign exchange sales. When the policy comes into effect, milk imports will no longer be eligible under payment terms known as “bills for collection” which allows importers to buy on credit. Importers will need to fund their Naira accounts and open letters of credit which will significantly reduce the profitability of importing milk and dairy products. 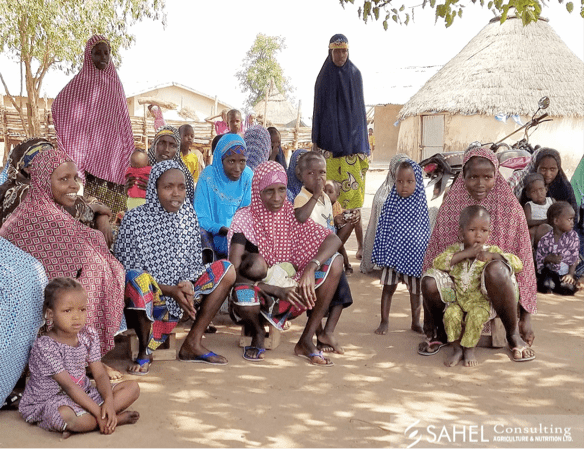 Although billions of dollars are spent on milk annually, domestic milk consumption levels are low. The average annual per capita consumption in Nigeria is between 10 and 20 liters compared to the U.S. dietary guidelines of 267 liters per year. Low consumption is a corollary of the low purchasing power of the average Nigerian household, who rank milk and dairy products as non-essential luxuries and prioritize other staple foods such as rice, beans, and yam. Notwithstanding the low per capita consumption volume, the Nigerian dairy production system is still unable to meet current demand.

This inability stems from the fact that the Nigerian milk production system is mainly subsistence-oriented and marred by low productivity. According to H.J Makun (2018), the average annual production per cow is 213 liters, which is less than one tenth of the global average. Local milk producers, mostly women, are unorganized and are limited by gendered cultural norms and a lack of agency – it is said that while the milk belongs to the women, the men own the cows. Women are thus largely excluded from decision making that affects their primary business. Other limitations on the cows such as their genetic composition, long distances covered for grazing, inadequate supply of feed and water, combine with poor production practices by dairy farmers, to lead to low production volumes of milk , and women consequently receiving little income from the dairy business.

Another hallmark of Nigeria’s underdeveloped dairy system is the absence of a fodder production value chain that provides farmers with year-round access to quality feed for their cattle. During the dry season when pasture is scarce in Northern Nigeria, pastoralists migrate to the more arable South in search for grazing land and water. In many cases, they encroach on land used for crop farming, leading to conflict with landowners, farmers and, in some instances, entire communities. According to the International Crisis Group, in 2018, the conflict between herders and farmers was six times deadlier than Boko Haram, with a death toll of 1,949. In the last decade, farmer-herder clashes have led to the death of more than 10,000 people, making it a national crisis that the government is yet to find a permanent solution to.

A thriving dairy sector in Nigeria will add value to the economy, empower local milk producers, and will ease herdsmen-related communal conflict. Self-sufficiency in dairy will reduce the country’s import bill, thereby reducing the pressure on the Naira as demand for foreign currencies drop. In addition, more jobs – for skilled and unskilled workers – will be created across the value chain. More importantly, the livelihoods of pastoral households will be improved. For instance, dairy farmers who participated in the Nigerian Dairy Development Program (NDDP) in Oyo and Kano reported that their income from milk sales increased by as much as 198%. Increased income allowed dairy households to increase their expenditure on food, education, and healthcare. Hundreds of girls like Halima no longer have to hawk and are now getting formal education in schools. (To learn more about NDDP, visit: https://www.youtube.com/watch?v=o7PESi93uck)

Additionally, a developed dairy sector would include a fodder production system that will allow for the emergence of settled pastoralists who do not need to migrate in search of pasture. This would contribute to reducing the levels and severity of farmer-herder conflict, thereby improving national security. The NDDP highlighted this potential through its feed and fodder program. In communities where integrated pastoralists settle, crop farmers were supported to cultivate fodder crops such as bracharia, lablab and maize to produce hay, silage and haylage which was sold to pastoralists. The establishment of an economic relationship between natives (who own the land) and pastoralists promoted community cohesion and mitigated conflict. The same can be achieved across the country.

Lastly, the increased sourcing of local, raw milk, as dairy companies crowd in, will create economies of scale which will gradually lower the cost of production leading to lower prices for milk and other dairy products, making it more affordable and accessible to Nigerians.

The development of the Nigerian dairy industry should be a priority. The government at all levels must create an enabling environment for this to happen. Beyond limiting access to foreign currencies, the government must develop and enforce coherent policies that encourage investment. Government action should also include an improvement of critical infrastructure such as feeder roads, electricity supply, and water resources. To sum it up, there is a need for a comprehensive national dairy policy that must be developed through an inclusive consultative process.

An enabling environment will encourage the private sector and development organizations to invest in farmer led and/or private sector led dairy development models. Through its co-investment model, the NDDP proved that pastoralists, if organized, trained, and provided with the required infrastructural support, can supply quality milk to dairy companies. Nigeria has the potential to have the biggest dairy industry in Africa. What is needed is a well-thought-out strategy to develop the sector and concerted collaborative action to implement the plan. When this happens, Halima’s life will be remarkably different. The livelihood of her household, and that of millions of Nigerian women and girls in pastoral communities, will be improved. Pastoral communities will have access to basic social amenities and infrastructure such as potable water, schools, health centers, good roads, and power. Halima’s future will no longer be gloomy. Instead, the future of tens of millions of Nigerians will be brighter.

That Nigeria will join the world’s climate change campaign train

Breaking the spirit of the public service: Yewande Sadiku and her traducers

Oil surges near $87 on tight supply

PDP can’t regain power without a unifying sense of mission

The first ladies and the last man (2)