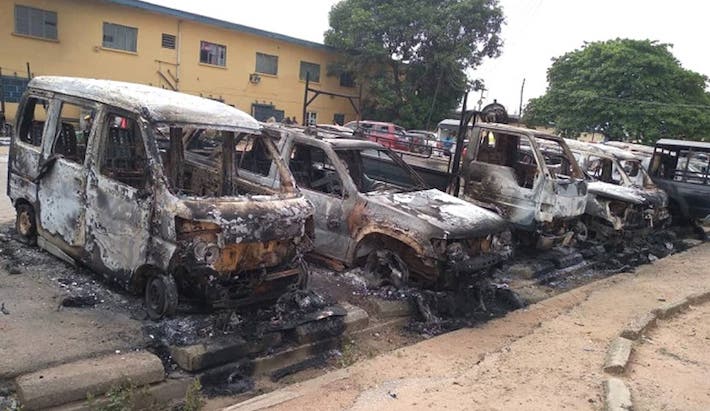 Imo State indigenes and indeed Nigerians woke up on Easter Monday, 5th April, 2021 to reports across traditional and social media platforms of a prison break and bomb attacks on the Imo State Nigerian Correctional Service and State Police Command headquarters, respectively. Then the videos and pictures started flying around, and they did not look good at all.

That ugly incident in Imo state has become a source of national embarrassment. For a state that has always been relatively peaceful, to now be at the centre of escalating insecurity calls for worry because Imo state is the heartland of eastern Nigeria. It is dangerous to continue to observe the escalating insecurity in Imo state, which has been on for more than a year with little or no tangible effort made to quell the trend.

It is high time indigenes of Imo state realised that the state belongs to them and that the state government is neither a government for APC nor PDP but for the entire people and residents of the state. Whereas a moment such as this calls for sober reflection, unfortunately the incident has become a subject of blame game and politicking with political gladiators positioning themselves to outweigh each other by employing every trick in the books.

To find lasting solution to incessant security threats in Nigeria requires all hands to be on the deck as the government cannot do it all alone without the cooperation of the people. We had expected to hear that the Police repelled the attacks; that some of the attackers were shot dead, and a few apprehended, but such news isn’t forthcoming. Instead, it was disheartening to hear that not a single inmate was left in the custody of either the correctional service or the Police force. Everyone was set free by the hoodlums. The only consolation was that no one died courtesy of the gunmen than any special efforts by the policemen or armed squad of the Correctional Services outfit. As one commentator rightly said, “If these gunmen weren’t ‘kind enough’ to decide not to waste blood, we would have certainly been greeted with bloodbath”. Had there been bloodletting on that Easter Monday, by now the stench of congealed blood would have taken over the entire city of Owerri and beyond and we would have seen a complete disembowelling of our entire security protrusion.

Before now, it would have been correct to think that the area where the command headquarters of the Nigerian Police force and the correctional service headquarters are located with the Imo State Government House tucked in between the two structures is the safest place in the state. But, we have been shocked into the realization that, not even the governor is safe. With the ease the operation was carried out, both the Governor and the Commissioner of Police could have been kidnapped.

That means nobody is safe. In today’s Nigeria, even President Muhammadu Buhari cannot be said to be safe. Indeed, no part of Nigeria is safe from security threats. Farmers have abandoned their farms, students are running away from boarding schools, travellers are scared of using the roads, even military officers are scared. When will all these end?

Imagine the number of men that could have executed such a dastardly act and the calibre and number of ammunition in their possession. When we add that number to those marauding in the north and southwest of the country then, we could say that we are in great trouble than anyone may imagine.

With the success of this attack against our own police in their own headquarters, one wouldn’t blame those who might have concluded that we have a sleeping police force. These criminals planned their attacks to coincide with the Easter holiday and in the sweetest hours of the night, and they obviously caught our men napping. Moving in such number of vehicles from many kilometres till they entered Owerri and getting into the police headquarters without being intercepted, should worry everybody especially the Police authorities, the state government, national security adviser and President Buhari.

The incident serves as a strong message to everyone that there are no impregnable fortresses, as long as we have a band of angry, hungry and frustrated youths. The only way we can guarantee an enhanced level of safety for everyone, especially, those in power, is to drastically reduce the number of hungry, frustrated and deprived youths and citizens in our country, through deliberate implementation of policies that enhance economic opportunities of the citizenry. Through reduction in the ostentatious lifestyle of our political class, and by ensuring higher transparency in the running of government business.

Unfortunately, Imo state has the highest number of unemployment in the country based on the recent report by the National Bureau of Statistics (NBS). The state also owes several months of salaries and allowances to civil servants in the state. Our politicians and top public servants cannot continue to rub their impunity and brazen corruption into our faces and expect that every youth would be as docile as many others to take such insults lying prostrate and celebrating the little crumbs that drop off their tables.

All said and done, the fact remains that Imo state like any other state in Nigeria, deserves development, deserves direction, deserves peace and deserves prosperity. And these are not something that anybody will sanely stand against. Therefore, every interest group be it political, religious or otherwise should sheath its sword, work together to find a lasting solution to issues of insecurity not just in Imo state or south-east region but in all parts of Nigeria.