Desecration of Bishophood amid political rascality 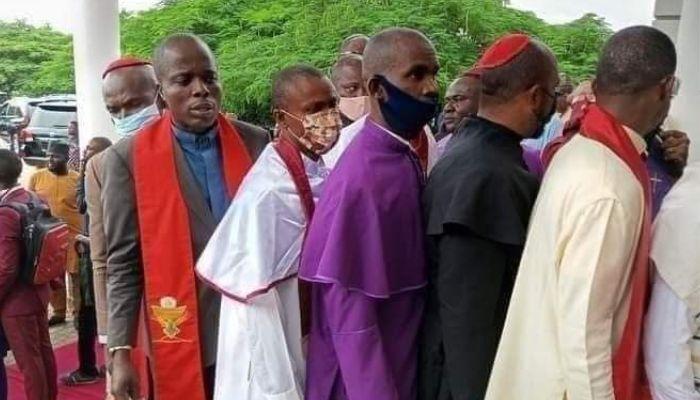 Recently, the ruling All Progressives Congress (APC) practically set the nation ablaze; had the Christendom emboldens violence or physical vengeance. The disgusting incident took place during the unveiling of Kashim Shettima, the running-mate to the presidential candidate of the party, Bola Ahmed Tinubu.

The ruling party played a sham through conspiracy with clerics impersonation. It is no doubt the act amounts to gross desecration of Christianity considering that clerics are held in reverence as servants of God. It is also well known that clerics’ regalia are exclusively, worshipfully worn by ordained ministers of the religion.

Recall that ahead of nominations, many groups including Christians Association of Nigeria (CAN) urged all political parties to shun a same-faith ticket. All the parties heeded except APC. But amid recalcitrance, the party rented artisans, clad them as clerics, conceivably designed to create disunity in Christendom.

Buhari carefully avoided the scenario by choosing a pastor during his two elections. Even then, the nation was more united than today; that worship centres are commonly attacked, worshippers killed and other religious extremism. An instance is the recent bloodbath at a church in Owo, Ondo State, where no fewer than 40 worshippers were reportedly gruesomely killed by rampaging gunmen.

Prior to that, on May 12, 2022, a Christian female student of Shehu Shagari College of Education in Sokoto State, Deborah Samuel, was accused of posting a blasphemous statement against Islam. The victim merely condemned a religious post on a students’ platform created for only education-related posts.

But without fair-hearing, the lady was helplessly ambushed, ruthlessly flogged, mob-beaten, stoned to death and burnt as an animal by religious extremists. A similar incident followed in the Federal Capital Territory in a space of one month on the same alleged religious blasphemy. Some leaders even declined to condemn the act.

Arguably, the clerics’ impersonation is a political extremism and blasphemous against a religious group. Apart from portraying a shameful desperation of politicians to deceive the public, the act is disputably inconsistent with the Electoral Act, 2022, which President Muhammadu Buhari assented to on February 25, 2022, to regulate elections.

For emphasis, Section 97 (1) of the Electoral Act, 2022, prohibits campaigns based on religion and ethnicity. The section provides – “A candidate, person or association that engages in campaigning or broadcasting based on religious, tribal, or sectional reason for the purpose of promoting or opposing a particular political party or the election of a particular candidate, commits an offence under this Act and is liable on conviction – (a) to a maximum fine of N1,000,000 or imprisonment for a term of 12 months or both; and – (b) in the case of a political party, to a maximum fine of N10,000,000.”

The provision is unequivocal. Did some persons patently engage in campaigning, promoting a candidate with religion? Possibly, the ruling party, its presidential candidate alongside running-mate may have contravened the above provision.

Thus, INEC should interrogate the drama. Failure to treat it for deterrence may encourage further mischief as elections draw closer. And essentially, the rule of law demands it be probed. It is a fact that there are lots of stout laws in the country but the willpower for enforcement, lacking except when the offenders fall within the underprivileged class or political opponents thereby weakening the system. This must not continue. If the law categorically prohibits campaigns with religion, in all fairness, the drama shouldn’t be overlooked.

In fact, the saving grace on the ‘clerics’ episode as said earlier is that Christians hardly fight violently over religion, otherwise, a crisis that could have taken lives alongside destruction of properties was invoked.

The act is condemnable, sacrilegious, nonetheless, the incident teaches a great lesson that religion shouldn’t be taken to the extreme. Indisputably, the masquerading; hiring, and decorating mechanics, other artisans with clerical apparels by crooked politicians to mimic clerics is not only discreditable but impious.

While the ‘clerics masquerading’ saga was trending, the PDP presidential candidate, Atiku Abubakar during his interview at Arise TV recently was credited with seemingly repulsive remarks. In an attempt to puncture the chances of Peter Obi, Labour Party’s flagbearer, the former VP boldly said “about 90 percent of northerners are not on internet” and therefore do not hear Obi and his Labour Party’s mantra.

Had such remarks emanated from a candidate from the southern part of the country, believably, Atiku would be among the first to throw arrows in revenge for slighting his region. Ideally, a leader should be worried rather than leverage the plights of the masses. But could this allegation be true?

Atiku also punctured APC that its government is characterised by lopsided appointments. I concur that a chief factor that affected the present government is workforce by subjective appointments. Though Buhari has robust policies, however, he didn’t engage the best hands to translate them to results, instead, mostly politicians after self-interests.

In fact, about 70 percent of the workforce cannot pass a competency test if in the private sector where proficiency is prioritised. How Buhari succumbed to being whitewashed with such a workforce, and still unable to reshuffle after the first term deeply calls for reasons. Truly, this is inconsistent with the bravery, willpower people perceived in Buhari that led to his resounding wins at the polls.

On the alleged oversight, an indictment if affirmative, will go to the Minister of Communication and Digital Economy, Isa Ibrahim Pantami that while the nation is advancing from 3G/4G networks, eagerly waiting for the rollout of 5G network to revolutionise the information and communication technology alongside the economy, a key region in the Nigeria-project with massive population is left behind; yet to embrace the digital world vast opportunities.

Beyond these issues, campaigns must be issue-based, essentially on capacity to rescue the economy from quandary and decay it found itself through quack leadership over the years. All indices glaringly point to danger. Recently, a music artiste, ‘ASA’ surprisingly ‘entertained’ President Buhari and his audience during the unveiling of the NNPC Limited at the Presidential Villa with an unexpected hit-song, ‘Fire on the mountain’.

The singer consciously used the concert to convey a direct strong message on the state of the nation. An oracle is not needed to buttress the point as the decays, cataclysms are glaring.

Exodus of the next generation; time to be concerned .