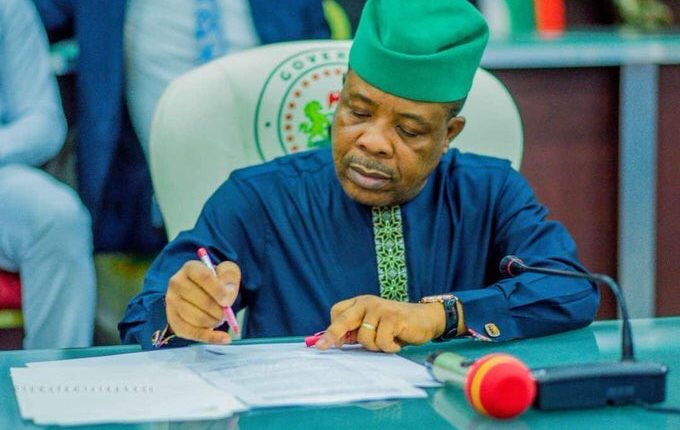 Share
The immediate past governor of Imo state, Emeka Ihedioha has asked the ruling All Progressives Congress (APC) not to celebrate the Supreme Court judgment that sacked him from office,  saying the verdict has put more questions about the future of democracy.
Ihedioha said because the verdict is like broad day robbery, fully orchestrated by powerful people in government, he is optimistic that Justice will prevail at the end of the day.
He stated this in Abuja, Saturday when members of the National Working Committee (NWC) of the People’s Democratic Party (PDP) paid him a solidarity visit at his residence.
The NCW was led by the National Chairman of the party, Uche Secondus. The meeting was to sympathize with Ihedioha over the Supreme Court judgment and encourage him to remain faithful.
Ihedioha who described the judgment as not only shocking but mysterious, said, he has taken solace in the book of Eclessiastics 3:1 and that he is very sure that the judgment will redefine the nation’s democracy.
He further stated that those who orchestrated the illegality should be mindful that their present action has become precedence and would redefine the future.
“This is not the time to celebrate, I pity anyone who is celebrating that sad event. If anyone is celebrating, that person is not a student of democracy. Our forefathers worked so hard to get us to where we are, and that is indisputable. So at a time like this, what are we bequeating to the future generation?
“Our children are asking questions that have not yet been answered and the facts speak for themselves. I hope they will be addressed. It is a redefining moment, it is a time for sober reflection because to my own understanding of lawmaking, it is about precedence, it is about reference, and so we need to be guided on how to move forward.
“This is a replica of the kind of attention the event of that black Tuesday 14th January resonated across the country. We are as shocked as yourselves, it was never anticipated. All legal pundits and democratic watchers never imagined and anticipated, so for us it remains a mystery.
“But we take solace in the Book of Ecclesiastics 3:1 that to everything, there is a season and time for every purpose under heaven. I believe that that event will define obviously our democracy. I am certain that the judiciary and electoral system are well aware that they are on trial.
“And what is fundamental about this is that thee facts of the matters as relates to the Imo state governorship election is that the foundation of our democratic processes, the elections in Imo were closely monitored, well advertised and everybody in Nigeria followed it through. The results were very clear, the electoral umpire still has the results, and INEC has stated clearly that the results in question and the figures are not summing up.
Share