Why oil operators in Niger Delta are guilty of human right abuses, by Peterside 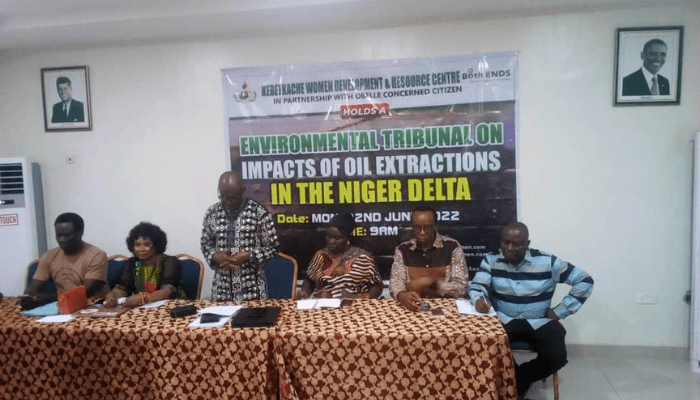 Oil operators in the Niger Delta are guilty of human right abuses, Sofri Peterside, a professor, has said during a mock court on the sideline of a summit on the Niger Delta Alternatives Convergence in Uyo, Ikwa Ibom State capital.

Peterside, who is a Social scientist and a lecturer in the Department of Sociology, University of Port Harcourt, said that the multinational oil companies in the Niger Delta grossly overlook all the environmental degradation in their areas of operation.

The Environmental Tribunal was headed by Peterside as the judge. After taking all the evidences by community members, he found the oil companies guilty as charged.

The oil companies however, were not represented at the mock court when judgment was delivered against them.

The University don charged the multinational oil companies to pay adequate compensation where necessary and clean up the many decades of oil spills and gas flares in the various oil producing communities.

Presenting the case before the tribunal, Precious Ibegura narrated how Egita community in Erema, Rivers State suffered oil spill from the facilities of TotalElf Ltd which destroyed their farmlands but that after investigation, compensation was paid to only men.

Celestine Akpoobari noted that the oil company was guilty, hence the payment of compensation.

Henry Eferebo testified in 1998 in Obelle community in Emuoha Local Government, where gas fire burnt down farmlands and destroyed their livelihood.

Shell Petroleum Development Company was petitioned and they were said to have injected some chemical into the farmland, which also allegedly resulted in communal wrangling and loss of lives.

Ken Henshaw and Emem Okon has earlier confirmed to the incident. He further affirmed to a sad situation where in 2018 there was military presence in most oil communities due to divide and rule system.

Another report that came before the tribunal was the case of the first oil well in the Niger Delta which Shell call it Oloibiri but the real owner of the oil well is Otuabagi in Bayelsa State, as stated by Esther Orubor, a similar case of Bomu oil field named by Shell erroneously.

The case of Rumuekpe was mentioned, how due to crisis the community is in exile while several oil companies still work there.

The story was not different in Aminigborkor community in Abua/Odual LGA in Rivers State, where Kwame Ansalem described the oil spill in 2010 from SPDC facility and how drilling waste was discharged in their water and stream, and no remediation has taken place.

In another development, Pastor Dandy Birthwell from Okwuzi community, in Rivers explained that Agip pipeline caused fire explosion at Ibucha Oil centre, and oil spill at River Nkisa, but due to contractors spy policy operated by the company nothing was done about it even after investigation. The horrible Umuchem case in Rivers State is another critical case. There are other cases in Akwa Ibom State where Mobil Oil Company and others have polluted the environment.

Earlier, the Executive Director of Kebetkache Women Development Resources, Emem Okon stressed that her organisation in collaboration with BothENDS and Obelle Concerned Citizen put on the program to look at series of human right abuses by oil companies to address them through inform advocacy where some of the cases can be looked into and compensation and clean up made to the affected communities.

The Niger Delta Alternative Convergence was chaired by the former governor of Akwa Ibom State, Victor Attah. According to Nnimo Bassey, the event was used to launch the Niger Delta Manifesto for Socio Ecological justice.