UK’s student visas to Nigerians surge 223% in one year

The number of Nigerians granted sponsored study visas, also known as student visas, by the United Kingdom (UK) has increased by 222.8 percent to 65,929 in June 2022 from 20,427 in the same period of 2021, a BusinessDay analysis shows.

Immigration consultants say the county’s high intellectual capabilities, cheap labour, large working population, high diaspora remittances and the withdrawal of the UK from the European Union (Brexit) are the reasons why the UK is scouting for Nigerians to grow their economy. 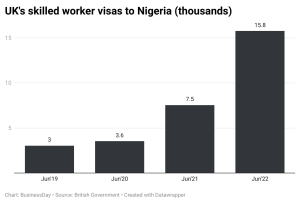 “This data is expected because of the opportunities that the UK government is offering to the World. They see the value that international people are bringing to other countries like Canada, Australia etc,” Oludayo Sokunbi, chief executive officer at Japaconsults said.

Sokunbi further said that in his firm, about 8o percent of his clients are going to the UK because of its easy access to study visas compared to other countries.

“People are seeing a future in the UK compared to what it used to be. They now know that once they finish school, they don’t have to rush back home as they can apply for indefinite leave to remain in the country,” he added.

The country had the second percentage increase as India was the first with 146.1 percent, the Philippines had 56.3 percent and the United States had 26 percent.

The UK is looking more to the commonwealth and other countries outside the European Union to fill its skills shortage because international students bring money into the economy, says Toyyib Adelodun, a UK-based immigration consultant

“Landlords make money from rent. University cities are buzzing. It is good for their economy post-Brexit and Covid,” Adelodun said.

Since 2020, the UK has been flexible in its immigration system and routes due to its withdrawal from Brexit. The removal has created a lot of job vacancies at the middle and low levels in the economy. Some of the routes introduced are Graduate route, High Potential Individual visa and Global talent visa.

And just recently, the country introduced a new Scale-up visa. The visa allows foreign nationals to come to the UK to work in an eligible job for a fast-growing UK business for a period of at least six months.

“I love how the UK government is opening up more visa routes to attract talents to grow its economy. The visa is a sweet upgrade to the Tier 2 sponsorship,” said Adewale Adetona, the co-founder at Menopays, a Nigerian financial technology company.

The demand or need to immigrate for Nigerians is not too hard to diagnose as high poverty, unemployment, poor human capital development, insecurity and poor education are some of the many reasons its young population is bailing out of the country to seek greener pastures.

A 2021 survey by the World Bank noted that 50 percent of Nigerian youths want to leave the country. The country placed third in West Africa among the nations polled, trailing only Liberia (70 percent) and Sierra Leone (60 percent).

Analysts say the surge in both study and worker visas will have both a positive and negative impact on Africa’s biggest economy, but that the negatives may outweigh the positives.

“On the positive side, it will foster inflows of remittance, a major source of foreign exchange for Nigeria. However, an increase in migration is a cost to the government, businesses and individuals,” Temitope Omosuyi, investment strategy analyst at Afrinvest Limited said.

“For businesses, most emigrants are highly skilled; hence, it would affect the performance of local businesses to stay globally competitive due to a dearth of access to skills. Those that can import quality skills will grapple with the high cost of doing business; hence, lower profitability,” Omosuyi further said.

He also added that by and large, it does not bode well for a country like Nigeria that desires to achieve inclusive growth through high local productivity and global competitiveness.