UK tops Nigerians’ list of destination for higher education in 2023 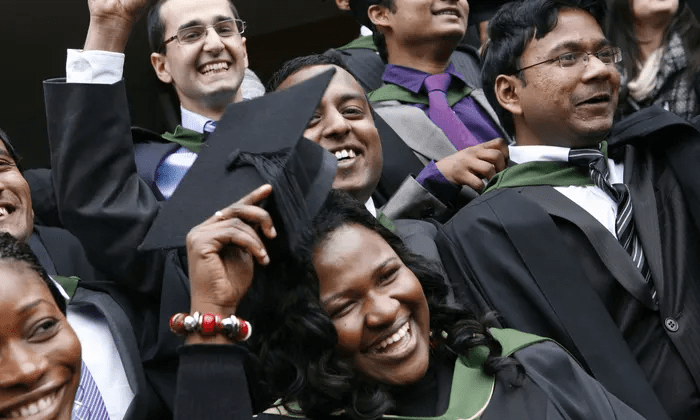 The United Kingdom (UK) tops most Nigerian students’ lists as the most preferred destination for higher education in 2023, according to information gathered from education.com, an authoritative education search website that compiles periodically the best countries to study.

Some of the reasons identified for this choice are that it is home to some of the most prestigious universities in the world, socio-cultural diversity, job opportunities after graduation, and first-class research facilities, among many other reasons.

However, beyond academics, the UK’s rich history and archeological sites, which hold historical relevance, serve as tourist attractions for students who would want to explore other areas besides academic work. From wandering through the Giant’s Causeway in Northern Ireland to peeking into William Shakespeare’s house in England, from exploring castles in Wales to looking for Loch Ness creatures in Scotland.

Furthermore, the report also revealed that the majority of these students majored in business management, engineering and technology, social sciences, computing, design, creative and performing arts, law, and subjects allied to medicine. 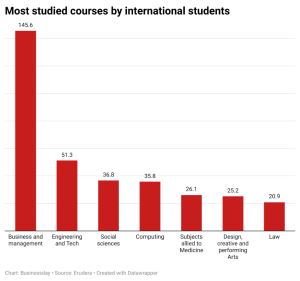 The choice of the UK for most Nigerian students was backed up by a recent report from Erudera that showed that Nigeria ranked third behind India and China for most international students with a total of 21,305. India and China had 84,555 and 143,820, respectively. 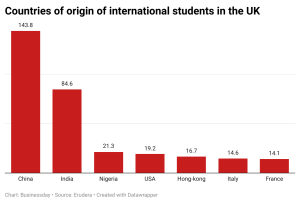 The opportunity to study and work, work placement opportunities after graduation, and English as the language of instruction and communication, among several others, were the reasons Chinenye Juliet, a Nigerian studying at the University of Buckingham, told BusinessDay about why she chose the UK above other countries.

“I decided to pick the UK as my choice for studying abroad because of the language factor; it’s an English speaking country  and I speak English; also, there is the chance of me studying  and working too,” she said.

“The UK Master’s program is just nine to 12 months; in the USA, it’s eighteen months, so it’s shorter. Since I want to get it for advancement in my career as a digital marketer and it’s faster, I decided to choose the UK,” Chinedu Williams, a student studying in the UK, said.

With the influx of Nigerians in the UK, the large number of Nigerian communities there makes it easy for people to consider studying there since some of their relatives already live there, thus making it easy for them to get a visa and accommodation. This is the factor Kofoworola Alli considered before deciding to choose the University of Sunderland in the UK, as her preferred choice for study abroad.

According to her, she chose the UK because she has family and friends there, which makes it feel like home.

“I chose the UK because I have family and  friends here, it feels like home, it is closest to home, I have been to the UK before and I enjoyed my stay,” she said.

On the perks on how studying abroad has been in comparison to studying in Nigeria, she spoke in line with Williams who said the short duration of academic semesters and the grading system, is a key factor in making UK universities the precise choice

“The duration of study is shorter for my course than in most countries. Also, for my course, we don’t take exams, we just do assessments; no assignments or anything else,” she said.

Aside from academics, there’s encouragement to have social lives outside of school work, and this is promoted through nightlife and social gatherings.

“Students are encouraged to have social lives, most universities promote their students’ nightlife, and some locals consider it a factor when picking a university,” she said.

According to Alli, this intellectual deficit is not prevalent in the UK because students are encouraged to conduct extensive research and classes are very interactive because they are required to make presentations on the results of work done on topics.

“Students are encouraged to do a lot of research and reading on their own, so when we are in class, we can interact, ask questions, and make presentations,” Alli said.

According to education consultant Charles Ogah, the increasing decay in the Nigerian educational system is the reason most students seek refuge abroad, citing constant strikes by university staff, the government’s failure to allocate a reasonable amount of money for the renovation of the collapsing structure, and other factors as the main reasons for the exodus of students out of Nigeria.

“University education has been highly neglected by the government, which has led to  constant strikes by university staff who are advocating for funds to renovate the universities and better pay. The lack of good pay has greatly affected the motivation and morale of the lecturer,” Ogah said.

He also said the institutions in Nigeria do more theory instead of practical classes, which has eroded the value of what is being taught since the students don’t even know how to put theory into action.

“Classes in Nigerian universities are more theoretical than practical, students are not really encouraged to do research; and learning isn’t really interactive as most lecturers just teach and leave the class without asking the students if they have a good grasp of what is being taught,” he said.