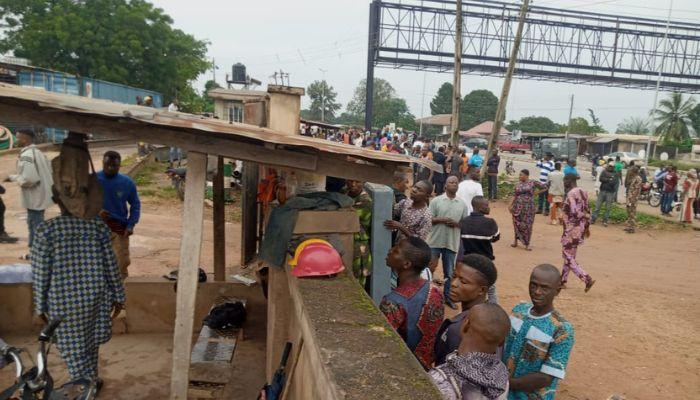 It was gathered that gunmen attacked those at the construction company, known as Craneburg, injuring two persons, Rifum Lawrence aged 50 years, and Abraham Opara aged 45 years old, who happen to be night guards in the process which took place on Wednesday evening, at Folahami Junction.

Dynamites were also used by the attackers who escaped from the scene before any security agent could reach there.

When our Correspondent visited the scene of the incident, it was learnt that the attackers placed themselves at different locations to unleash terror on the company and left the two night guards injured.

Expended bullets littered the scene of attack, while gaping holes on bullet-riddled buildings remained in the wake of the attack.

The Chief Security Officer of the company, Aladeselu Olatubosun, who was initially reluctant to speak with journalists said there would have been more devastating outcome, if not for the rain.

Recall that three months ago, a security man was killed at the same construction site while an expatriate was kidnapped.

According to Odunlami, in a statement made available to journalists on Thursday in Akure, the Anti Bomb squad confirmed that an Improvised Explosive Device was used to burst a tractor tyre at the scene of crime.

“The command is using this medium to warn those who do not know the real situation of things not to cause unnecessary panic within the state by peddling unconfirmed stories relating to the incident,” police said.

As of the time of filing this report, the victims were still responding to the treatment at the Federal Medical Centre (FMC), Owo.