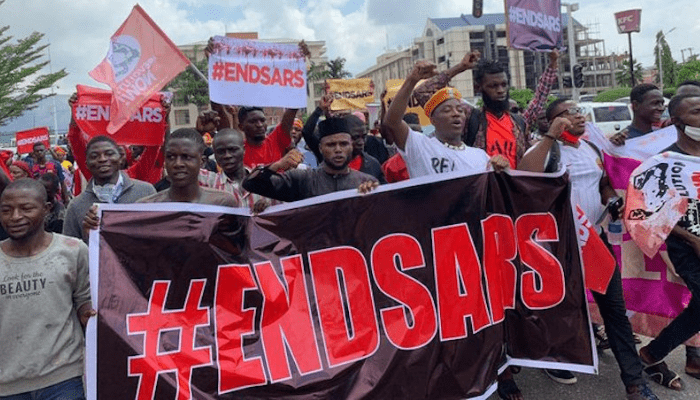 The Special Anti-robbery Squad (SARS) has been in the eye of the storm many times. But something always happens to get them back to sailing like nothing really happened. They are used to toughing out the storm of public opprobrium and wading right back to their regular beat, which are the streets of Nigeria, to pick up anybody, but especially young Nigerians who ‘look like’ criminals. Usually, these ‘suspects’ are individuals with tattoos, piercings, dreadlocks, hair plaits, sag pants, or who drive cars considered flashy, or are simply seen casually handling their laptops and mobile phones.

When, from time to time, the good men of SARS can’t find enough of their stereotypical criminal types, they descend on just anyone who happens to be nearby, and haul them off to be ‘interrogated’ SARS style.

‘You look like Yahoo-yahoo’, they bark. Stories abound of SARS operatives emptying suspects’ bank accounts and this after brutalizing them. There are too many stories of barefaced intimidation that led sometimes to young Nigerians being ‘wasted’, disappearing, or badly injured.

Now, these young people have had enough. The EndSARS campaign is yet gathering steam especially in the South of Nigeria and in Abuja. As at the time of this writing (13/10/20), more Nigerians had come out to reveal their experiences with SARS. Omobola Johnson, erstwhile Minister of Communications told of how SARS harassed her son, who was standing right in front of the family house, accusing him of loitering. The Ooni of Ife also came out to detail how her daughter was stopped on her way to board a flight. She was detained for about 30 minutes while her luggage was searched top to bottom, all because they saw a laptop with her.

It is a shame when your country that does precious little for you goes out of its way to prevent you from making a life for yourself. What the SARS set-up is saying essentially is that you have no right to anything but the poverty that pervades Nigeria. You have to look like Nigeria. The poverty mentality is from a psychically deep place, and it’s one that says ‘Don’t look good. Don’t be different. Nigeria is hard. If you aren’t looking haggard, there’s something you’re hiding.’

What was set up to rid the country of armed robbers has turned on its own citizens, on its posterity, so to speak. While the tribe of armed robbers flourish and sire new children called bandits, kidnappers, rustlers, ritualists, etc., trigger happy SARS is profiling young Nigerians and making their lives miserable, and that’s when they don’t take their life altogether.

“Stop Killing Us!” What’s too hard to understand about that? Just let young Nigerians be! Allow them the room to be themselves: creative, brilliant, inventive, hardworking. There are criminals amongst them, sure, but there are even more criminals amongst SARS. For those young people who are legit criminals, let the law take its course. You can’t just kill them because you think they are criminals. Even the criminals amongst them need be reformed, not killed. They are citizens of this country. They have every right to live and thrive here. No government should get in the way of that.

We all know that when the Nigerian Police sets its mind to work, they can amaze, yes. But they also are bedeviled with the myriad issues of Nigeria. And clearly, those issues have been steadily robbing them of their humanity. The places where they are quartered look more like a pigsty than where human beings ought to live. And who can forget that Channels TV documentary of a few years ago, where an investigative journalist accessed the police training school in Ikeja? Terrible sight. Not a place fit even for criminals, not to talk of for training civil minded police officers.

Their salaries are pitiable. Just like what the pitiable mass of Nigerians earn. And so, although some of them are really good cops despite all that Nigeria throws at them, it’s time to get rid of SARS. Their operational mindset is too set for reform of any sort. Government should do the hard job of coming up with a new unit properly prepared to tackle armed robbery and all the other violent crimes prevalent in the country.

These young men and women one sees on the streets are different. They are not passive like the generations before them who bore and still bear every ill with resigned equanimity, leaving it to the Almighty whose wheel of justice turns even slower than that of secular justice. These young ones are angry and are not afraid to bare their minds and where they deem necessary, their fist.

They cannot be harassed abroad on account of their green passport, and then harassed at home on account of their work tools or how they look. What happened to the constitutional provision for freedom of movement in Nigeria?! And despite all the noise about Yahoo-yahoo, haven’t well-known Yahoo boys and girls been walking about, including with police escort, while innocent young Nigerians are harassed no end?

The president and his government must see in #Endsars an opportunity for reset with the young people of this country. There has to be an active effort at dialogue, at understanding the issues and remediating them as soon as possible. Make no mistake about it, the furious lash out at SARS by the deeply unhappy youth of Nigeria is but one layer of their multi layered discontent.

And just like we saw in the United State recently, when George Floyd was kneed to death by a police officer, Corporate America was not afraid to get into the fray. They extended support in various ways to the Black Lives Matter Movement and its spin offs. It’s a little different in Nigeria, but yes, corporate Nigeria, without seeming to be adversarial, can get on board and be agents of mollification and, yes, change.