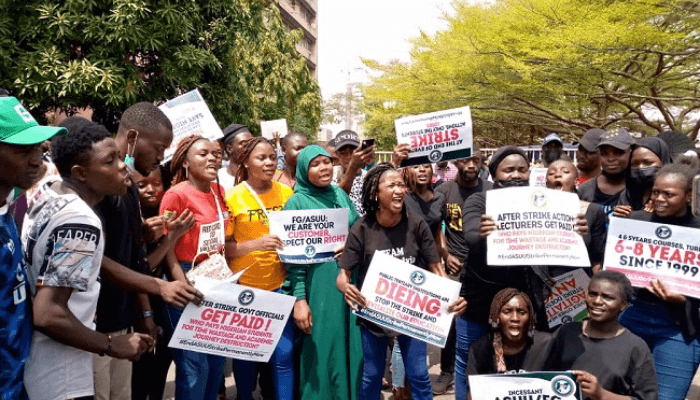 Public protests have become common feature in contemporary societies where citizens communicate their discontenting relation to government policies, actions and inactions. Public protest is a democratic platform for government to understand the feelings of her people and responsibly assuage their pains and displeasures.

Through public protest, the public space is contested and appropriated between the state and the citizens. Since protest may expose loopholes in governance and the hollowness of those at the helms of affairs, it is also functional for driving social change and another way of political participation.

It is this contestation over public spaces between the state and the civic public that brings up memories which are communicated by protesters with their placards and songs. This piece attempts an interpretive understanding of how protest songs empower us to dissect the relationship between government and the people, as well as appreciate how bad MUHAgovernance brings up memories of promises unkept.

It elevates the agency of the people to query bad governance, deride exploitative leadership and call for positive change in the affairs of the state. It gives the participants the opportunity to catalogue existential challenges which confront Nigerians and the difficulties they face in navigating it.

I employed some of the songs composed by Labour union activists and other Nigerians who hit the streets on July 26 and 27, 2022 to register their displeasure against the over five months strike embarked upon by the Academic Staff Union of Universities (ASUU) and the lackadaisical attitudes of President Muhammadu Buhari (PMB) and his Ministers in resolving the matter. Although Nigeria Labour Congress foot-dragged as the protest was long overdue, the protesters hit the roads nationwide carrying with placards with inscriptions such as “end ASUU strike permanently and bring our children back to school”, “stop making universities constituency projects”, among others.

“All we are saying…. end ASUU strike”, kicked off the protest in Ibadan. Old men and women, strong and frail, young adult and adolescents who felt the need to express their feelings about Nigeria joined the protest. As we moved through NLC secretariat to Agodi-gate junction, they sang “e ma bailu je mowaloori, e balu je mowalori, kosomo yin Kankan ninaijiria, e ma balu je mow a loori”.

This is a pointed attack on the destructive act of the parasitic ruling class whom the protesters asked not to destroy the common patrimony because their children are abroad studying and enjoying Nigeria’s money. This is a clear warning to Nigerians not to invest their votes on those who do not consume what they serve to Nigerians. As the strike continues, some governors went abroad to attend the graduation of their children yet they failed to provide similar world class institutions for children of the masses at home.

This, to the protesters is a strategic way to destroy Nigeria for the masses since they have plans B clearly mapped out for their families. How can Nigerians have been deceived to vote for someone whose children studied abroad but was said to be poor? Will someone getting treated abroad and not at home be committed to provide quality health facilities for Nigerians? The rest is history and one hopes Nigerians have suffered enough to make the right choices in 2023.

The protest also afforded protesters the opportunity to ask questions about unfulfilled promises made by those in government.To demand accountability, they sang “O tiyaragbagbegbogbo re ileriri re igbaipolongo, ase binti logbonori e, iwoti a ro poo gbon”. This song recalls the promises made by President Muhammadu Buhari in relation to fixing the economy, fighting corruption and combating terrorism and his promise to lead from the front.

The song shows how the perks of office make office holders forgetful. It shows a transition from someone who promised to impact positively but unleashing misery. It explains how unreal and deceitful political parties and their candidates have deceived Nigerians who are currently experiencing nosediving fortunes in every area of their lives since the birthing of this government over seven years ago.

The Nigerian leaders mentioned also raises fundamental question about the quality of leadership Nigeria has had its level of degeneration and the reduced attention paid to critical social institutions such as education by successive administrations.

He has made pound-yam and eba to be out of reach of common man yet he uses our money the way he likes). Inflation creates unaffordable food items which makes protesters justifiably angered as gaari and rice prices have gone up with hunger and malnutrition as consequences (O ye ka binu, o ye ka binu, gaari won, rice won, petrol won, gas won, ebi n pa mekunnu o o ye ka binu). This is attributed to the poor economic management of the President’s team and the lack of political Will to tame insecurity.

Entertaining as it is, it tells us about rampant impunity in government circle, the seeming incapacity of the Buhari-led government to deal decisive blow on terrorists and bandits who have started poking their sinister hands into the eyes of PMB security zones.

Could it be corruption that accounts for such lapses or the incompetence of the Service Chiefs or the underhand of war entrepreneurs? Whichever way, the protest signposts these failures with urgent demand for positive change.

While the protest may have ended with ultimatum given to government to end the strike, public protests are critical for social change which the public should engage in to demand accountability. The lyrics interrogated have utility value for re-examining and renegotiating the social contract between government and the governed.

From the songs, the Buhari administration is able to appreciate how well they have done and how Nigeria is now better secured than what they inherited from former President Goodluck Jonathan and how under their watch, Nigeria was promoted to the exalted position as the poverty capital of the world with N710 naira exchanging for 1$!The deceit of 2014 and failure to correct it in 2019 landed Nigeria at this dire condition. Will Nigeria repeat the same error in 2023?