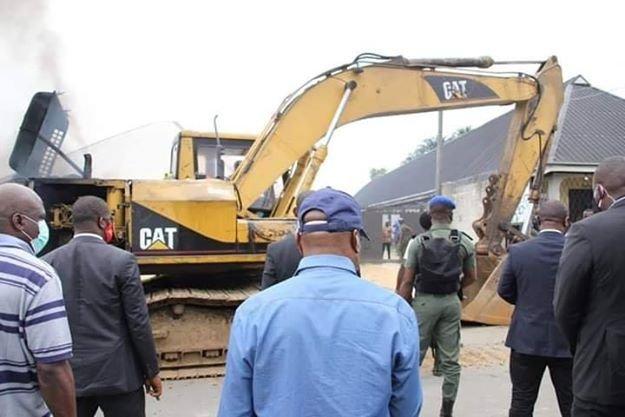 Owner of the demolished Prodest Hotel in Eleme near Port Harcourt has cried out again, this time, over what he called imminent death facing his manager now in detention.

The Lagos-based investor, Needam Promise Gogorobari, in a statement Sunday, May 24, 2020, says he has it on good authority that his manager is infected with the coronavirus, saying his lawyer is being illegally traced in contact tracing.

The investor states his information is based on intelligent report reaching him on Sunday, that the manager, Bariledum Job Azoroh, who has been in detention since the past 15 days on the orders of the Rivers State government, has been framed up by hired medical officers to have tested positive to COVID-19 while in detention.

The petitioner described the detention facility in a stadium in the state capital as illegal, claiming that the Federal Government had since kicked against all forms of illegal detention in Rivers State. “The administration of Governor Wike has no regard for the rule of law and feelings for the poor masses.

“You will further recall that the manager was held by the administration of Gov Wike and kept in this stadium facility and was surreptitiously tried and convicted last week with a fine of N50,000 and to be isolated for 14 days. This is the worst abuse to citizen’s human rights under the Quarantine Act.

“The Rivers State Government must be held liable for infecting my manager who is in their custody for over 15 days with COVID-19. He was a very healthy person before his arrest. It is therefore medically impossible that the infection occurred before his detention.

“It is a known fact that I and the Rivers State Government are at daggers drawn over the demolition of my hotel. It is a bestial act for the same Government to convict my manager and now infect him with the novel Coronavirus,” Gogorobari said.

He expressed sinister motives by the government on the manager and the lawyer. “The manager is currently under pressure to take some unorthodox drugs that are non-compliant to the NCDC prescription and treatment procedures. “Furthermore, the drugs have been prepared locally and it is a poison such that if used the drugs will kill the manager of Prodest Hotel within 24 hours,” HE alleged.

He claimed that the government wanted the manager dead to convince the public that infected persons were in the hotel, all in an attempt to justify his illegal demolition of the hotel on the 10th of May 2020.

“The society should, therefore, be concerned just as I am worried. This is an SOS call. The President of Nigeria should step in now to stop this murderous rage. He should submit the manager to the NCDC in Abuja and stop all further acts in this matter.

“All concerned are by this advised to go into hiding until the President steps in. This situation requires the full implementation of a state of emergency in Rivers State.”

The Rivers State government just raised the alarm that some indigenes in Abuja were plotting to stage a state of emergency in the state, using the excuse of the COVID-19.

The state government has however reacted, saying the manager of Prodest Hotel is among the latest new positive cases in the state.

“The Manager of Prodest Hotel, Eleme is among the new positive cases.

This latest development validates the State Government’s proactive approach towards the fight against COVID-19. Recall that Prodest Hotel was demolished two weeks ago because the owners violated Executive Order 7 which banned the operation of hotels.

“The COVID-19 Taskforce members from the Local Government who went to enforce the Executive Order were brutalised and dehumanised leading to the death of one of them.”