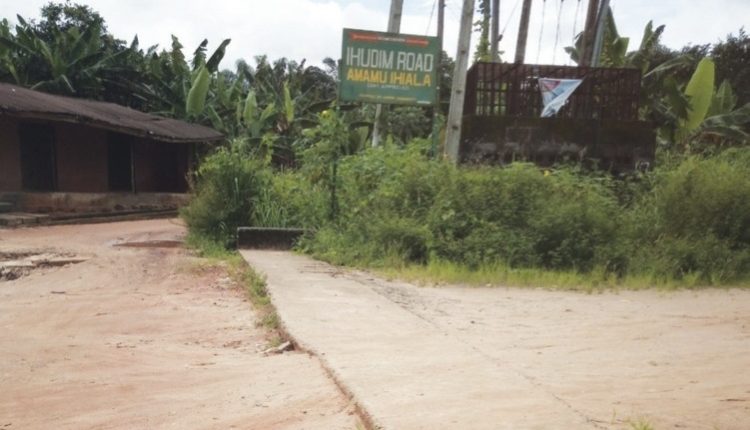 There were screaming headlines on the front pages of national newspapers on August 28, 2018. The story was about the 69 ongoing projects funded by the Federal Government in the South East part of Nigeria.

It made headlines because the governors of the South East had met few days earlier to protest marginalisation of their zone. The governors had alleged that most federally-funded infrastructure projects in their zone were stalled.

Consequent upon this, Nigeria’s Information Minister Lai Mohammed refuted this claim, releasing a list of 69 projects that were going on in various parts of the zone.

“His Excellencies were either misquoted or they were quoted out of context. Either way, this allegation flies in the face of available evidence,’’ Mohammed said in Ilorin, Kwara State capital, at a lecture, in reference to the governors’ claim.

“Though the contracts for many of the roads were awarded before the advent of this administration, they were either poorly funded or not funded at all, hence work on the roads has lingered,” he added.

Mohammed said the 69 roads and bridges, spread across the five states in the South-East Nigeria, were at different stages of completion, thanks to the funding sourced by the present Muhammadu Buhari administration from budgetary allocations, the Sukuk Bond and the Presidential Infrastructure Development Fund. 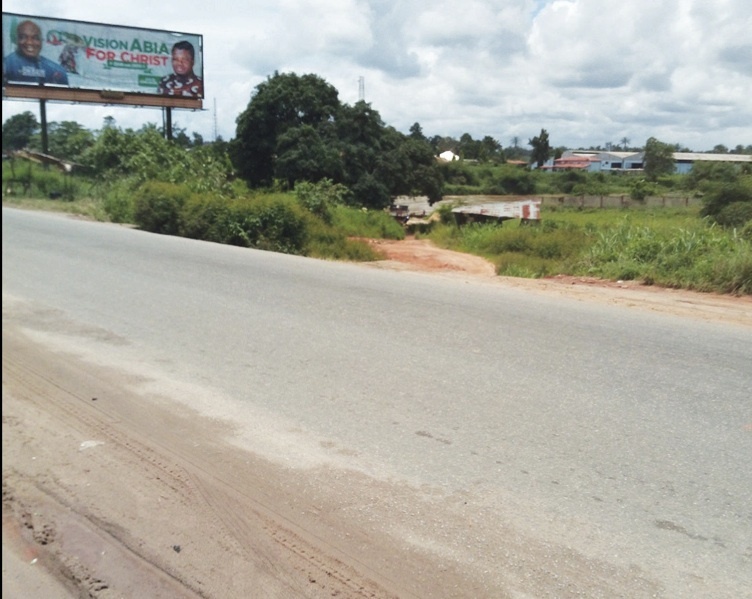 The South East is one of the six geopolitical zones in Nigeria. It is made up of Abia, Anambra, Ebonyi, Enugu and Imo states. It is the only zone among the six geopolitical regions with five states. The other five—South South, South West, North Central and North East have six states, with North West having one more.

Pundits say the region has the worst infrastructure record, with major federal roads in state of disrepair.

The zone is made up of mainly Igbo-speaking people of Nigeria, who are one of the tripods on which the country stands—with the other two being Yoruba in the South West, and Hausa/Fulani in the North-West/North East.

From the days of Olusegun Obasanjo (1999-2007) to Umaru Musa Yar’Adua (2007-2010) and Goodluck Jonathan (2010-May 28, 2015), promises of infrastructure revamp were made to the people of the region, but these often turned into political gimmicks targeted at winning votes. The promises would often come weeks before general elections and evaporate weeks after.

My interest was, therefore, aroused the moment I saw the list of projects in the zone released by Nigeria’s Information Minister.

I decided to fact-check these claims. I noticed that out of the 69 projects, 20 were classified  as ‘construction’ while the rest were designated ‘rehabilitation’.

I moved down to the South East to investigate the ones categorised  as ‘construction’.

A bridge or a ridge?

I left Lagos for Ihiala. My first port of call was Oseakwa Bridge. This project had been listed as ‘construction of Oseakwa Bridge in Anambra State, C/No. 6043’ by the Minister. My findings showed that Oseakwa Bridge was awarded on October 6, 2009, to Horizon Construction Co. Ltd at N896.863 million.

When I got to this location, I observed that no work was going on. My findings showed that the project was completed two years after by the immediate past government of Goodluck Jonathan.

But there is something striking about this project. What the Federal Government calls ‘Oseakwa Bridge’ is not technically a bridge. It is just a road in a typical Nigerian village—sandy, hilly and bumpy.

The Cambridge Dictionary (online) defines a bridge as a ‘structure that is built over a river, road, or railway to allow people and vehicles to cross from one side to the other’.  This so-called bridge does not fit into this definition.

Also, the road leading to it is not tarred and the road extending from it is decrepit and is not passed by vehicles.  Ordinarily, federal government roads always interconnect states in Nigeria, but this so-called bridge does not lead to anywhere.

Villagers told me that work was done and completed on the so-called bridge, but the road looks like nothing was ever done. 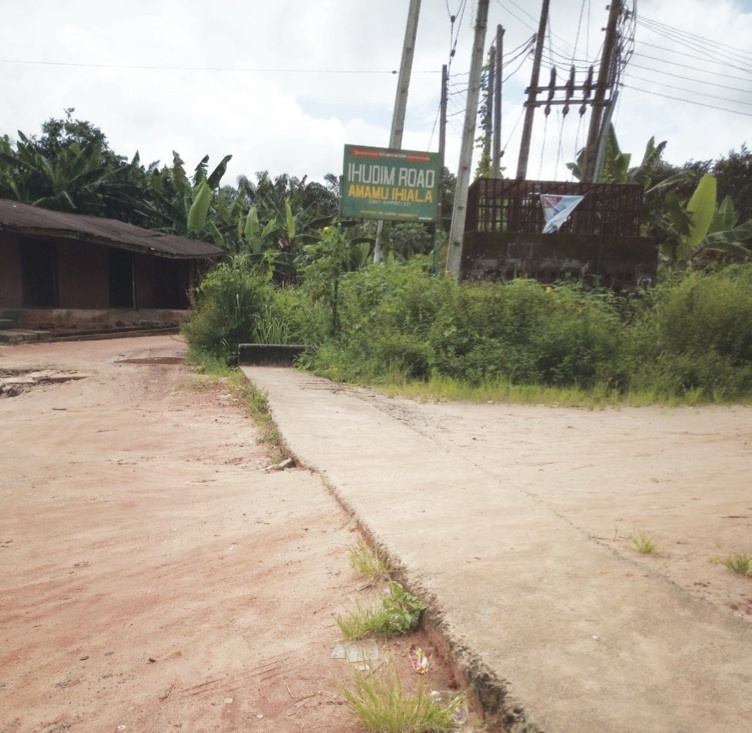 First is the Olokoro-Isiala-Oboro-Nnono Junction awarded on December 21, 2010, to   Abia Bok Company at N515.315 million. This road starts from Federal University of Agriculture Umudike, down to Isiala Ngwa. I found that it was completed in 2013. Contrary to claim made by the Minister, the road was not poorly funded. However, some sections of this road—around Isiala—are decaying, which speaks to the quality of work done, an engineer, Duru Anayamere, told me.

Second is the Ahiakwu-Amangwo-Umuahia-Ngwa-Ngwa Road, awarded on December 23, 2010, and contracted to La Ann Engineering Nig Ltd  for N589.554 million.

I found that this road was completed before May 2015. No work was going on as of September 13 when I used this road. It was neither abandoned nor poorly funded as residents testified that it was completed around 2013.

Another one completed by the immediate past administration but listed as ‘ongoing’ by Lai Mohammed is the Olokoro-Alaukwu-Itaja-Okwu-Obuohia-Ikwuano, awarded on March 10, 2010, to Rhas Nigeria Limited at N990.673 million. I found that this road was completed before the advent of the current government. No work was going on as of September 14  and it was not poorly funded as claimed by the Minister.

While going to Aba, the industrial nerve centre of the region, from Owerri, Imo State capital, I alighted at Imo River. This river borders Imo and Abia states. The road leading to this river was listed as ongoing. But I found that it was  completed in 2014 and is in good shape.

I classified eight out of these 20 roads as ‘not ongoing’ because they are uncompleted and no work was going on around them as of September 15.

On travelling to Isseke Town-Amafuo-Ulli with Spur (Ihiala-Orlu-Umuduru Section) in Anambra State, I decided to engage a commercial motorcyclist on the state of this road.

“You can see that the contractor started in Isseke and stopped at Health Centre, Ihiala. They stopped work here before the 2015 election and nothing has happened since then,” the motorcyclist, who gave his name as Ikenna Iluno, told me.

I stopped at Ihiala Microfinance Bank to buy a bottle of water. I looked around and observed that vehicles were often trapped in the muddy waters in Ihiala, a road the Federal Government listed as ongoing.

Natives of Ihiala were shocked when I told them that construction of the road was supposed to be ongoing.

So, it is correct that this road was not completed and could have been poorly funded.

I moved down to ‘Ikemba Drive Spur on Oba-Okigwe Road Through Permanent Site of Nnamdi Azikiwe University Teaching Hospital in Anambra State’. This road has some sections that need repair. I did not see any work going on when I used it.

Next is Umulungbe-Umuoka-Amokwu Ikedimkpe Egede-Ojieyi Awhum Road. The Federal Government said it awarded a contract on this road to IDC Construction in June this year.

I went through this road but no work was going on yet.

“We have not seen any contractor on this road. We only hear it on the radio,” a sceptical Daniel Okoro, a commercial driver plying this road, said.

“Maybe they are waiting for the rains to subside,” Uche Ene, another commercial vehicle driver, interrupted.

My investigation took me to ‘Oji-Achi-Mmaku-Awgu Road With Spur To Obeagu-Ugbo in Enugu State’. This road was not completed and no work was going on when I used it. The same fate applies to Ogrute-Umuida-Unadu-Akpanya-Odoru Road in Enugu/Kogi.

I witnessed an anomaly on ‘Aguobu-Owa-Mgbagbu Owa-Ebenebe (Anambra State Border) with Spur to Awaha-Oyoha-Oyofo-Iwollo Road in Enugu’. This road starts from a town known as Amansea in Anambra State. But this town was not factored into this project. The only section of this road constructed was between Alaoji and Okpuno in Ebenebe. This is just one out of seven towns which the contract was supposed to cover.

Of particular interest is the Amansea road. It is dilapidated and decrepit. I noticed that some sections of the road were rehabilitated. However, I was not convinced that it was handled by the same contractor that worked on Ebenebe axis. The reason is simple: Ebenebe road is solid while the section of Amansea road already serves as a dunghill. No work was going on here when I used this road.

Similarly, ‘Umuna-Ndiagu-Agba Umuna-Ebenebe-Amasi Awka Express Road with Spur from Umuna – Ndiagu (Agba-Ebenebe) Section I in Enugu State’ is bad. Beyond Agba Ebenebe, roads are decrepit. Commercial motorcyclists, therefore, have a field day here, charging N1,000 to N1,500 to move residents and villagers through this road.

Moreover, I noticed that Ikot Ekpene Border-Aba-Owerri was not ongoing. I was told that the contractor abandoned the road two months ago because he was not mobilised. The contractor his vehicles at a private residence in-between the United Evangelical Church and Onyedika Industries Limited, Alaoji Ntigha.

Light at the end of tunnel

However, seven out of 20 roads are ongoing, from my findings.

One is Nkporo-Abiriba-Ohafia, which was awarded in May 2012, but was abandoned by the immediate past administration of Goodluck Jonathan. Though I classified this N2.739 billion project as ‘ongoing’, work on this road is in fits and starts now, forcing villagers to ask if the government has indeed mobilised Dutum Construction Nigeria Limited or if the contractor is just slow.

The second one  is the Abriba-Arochukwu-Ohafia Road in Abia State, awarded by the immediate past government on December  13, 2012, at N2.265 billion. Sections of this road, handled by Beks Kimse Nigeria Limited, are still bad. I was told that the senator representing the zone, Mao Ohuabunwa, facilitated some level of rehabilitation of this road in March this year, making it a bit motorable. But as of the second week of September when our correspondent visited this road, the road looked decrepit.

Roads in this area have been abandoned for ages and politicians play politics with them, I was told.

“Once the government announces the construction of roads around here, politicians begin to take the praise by claiming that they influenced the contracts,” one native of Ozu Abam Ohafia told me.

“Is it not their job to influence such contracts?” he asks rhetorically.

Next is the Ohafia-Oso Road, which is between Abia and Ebonyi states’ border. Work on this road, though ongoing, is in fits and starts.

The N979.889 million Omor-Umulokpa Road, which borders Anambra and Enugu states, is going on, just as Nnenwe-Uduma-Uburu Road.

Similarly, construction of Nenwe-Nomeh-Mburubu-Nara Road with spur to Obeagu Oduma Road in Enugu State is going on and is handled by Arab Contractors OAO Nigeria Limited.

Also, Ugwueme-Nenwenta-Nkwe-Ezere-Awgunta-Obeagu-Mgbidi Nmaku Road Project Enugu State is ongoing, according to my findings. True to Lai Mohammed’s words, it was observed that some of the projects are being funded with Sukuk Fund.

Out of the 20 projects listed as ongoing by Mohammed, only seven are actually ongoing. I got pictures and videos to prove them. Mathematically, this is equal to 35 per cent.