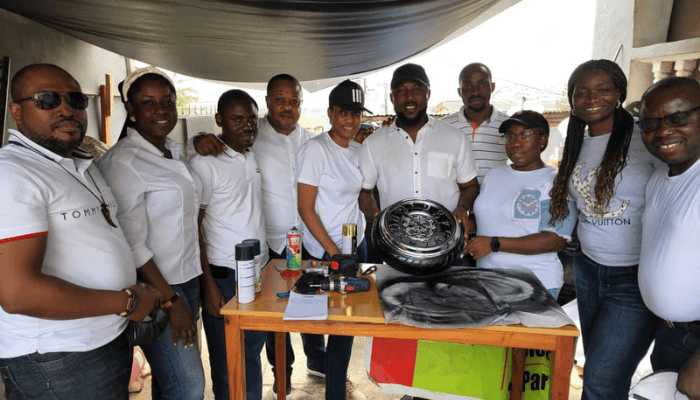 In the last decade, Africa’s biggest economy has experienced a surge in population growth and urbanization, which in parallel, has resulted in an escalation of waste generation across the country.

The situation is worse in Lagos – Nigeria’s commercial centre and home to roughly 24 million people and this is not only a Nigerian problem but a global challenge.

According to the Ministry of Environment, Nigeria generates 32 million tonnes of waste annually, among the highest in Africa. Of the waste generated yearly, 2.5 million tonnes is plastic, most of which 70percent ends up in landfills, sewers, beaches and water bodies.

Much of the waste generated across the country litters the environment, and blocks drainages, causing flooding and air pollution. The United Nations projected Nigeria’s 200 million people to double by 2025.

This means things could be worse for the country if the issue of waste is not addressed. In response, some entrepreneurs are providing answers to waste by taking it straight from the dump, transforming and redefining its purpose. These innovators work with different waste materials.

Among them is the Green Tyre Team of the Lagos Business School’s Senior Management Programme – a senior executive programme designed for functional managers with over 10 years of work experience and who are managing a team.

To tackle waste in Lagos state the team is aimed at recycling tyre to support low-income earners. To do this, the SMP team partnered with JD Recycling – a fast-growing recycling business in the state.

Damilola Abifarin, a participant of the SMP at the LBS and a member of the Green Tyre Group told BusinessDay that the programme is meant to enhance the effectiveness of executives.

This innovative programme from LBS is coming at a time when the rapid development of the world automobile industry and transport sectors is making the demand for all kinds of tyres increase at a rapid rate hence, constituting tyre waste problem that has become a serious environmental challenge.

The human resource expert explained that the entire class of SMP is organised into groups for effectiveness.

“Our group SMP 83 group one, is a team of 12 individuals from diverse backgrounds. As part of the criteria to complete the SMP we have to do an executive challenge.

“We are called Green Tyre Group because our focus is on tyre retreading and tyre up-cycling,” she said.

“We realised that we can help the environment by taking worn out tyres on the streets of Lagos and giving them a new lease of life and a retreaded tyre uses a life span of 60,000 -70,000km while a brand new tyre which is more expensive can run for 80,000km. However, not all tyres can be retreaded,” she noted.

Abifarin further disclosed that the tyres that we cannot retread are the ones they used for upcycling business.

“We worked with various players in the waste recycling industry just to mention a few: JD Recycling – this is a company that upcycles used tyres and turns them into beautiful home furniture and fittings. We intend to partner with LAWMA to clean out the streets of Mushin and Oshodi by picking used tyres off the streets and upcycling them for wealth as an awareness drive,” she said.

“We also partnered with an established retreading centre, as a learning experience – A Tyre Retreading Center. They are into retreading truck tyres for the haulage industry. The successes identified to lead to the conclusion that we can turn tyre waste into wealth,” she added.

She revealed that the LBS programme for senior executives is helping them turn waste tyres into beautiful furniture pieces that they sell for profits, which are then donated to low-income earners and vulnerable groups in society.

She explained that the major challenges or failure of this industry is in the cost of buying retreaded equipment and opening a retreaded centre. According to her, it is capital-intensive and requires a lot of money to set up.

She noted that apart from recycling, the business also trained women in recycling as an empowerment programme to enable them to earn a living and through the partnership more women have been trained.

According to her, the partnership which is still in the early stage has upcycled over 20 tyres that have been donated to low-income families.

“The partnership is still at the infant stage. We have been picking up the tyres together from the street to upcycle,” she said.

“The team sponsored training for two women who were also empowered to be able to kick-start their businesses,” she added.

In 2019, the Global Material Footprint (the amount of raw material including fossil fuels, biomass and metal and non-metal ore, extracted to meet total consumption demand), according to the United Nations, was 85.9 billion tonnes – up from 73.2 billion tonnes 10 years before.

“We sourced tyres in different ways. Most times, we pick tires on the streets, sometimes we use collectors for which we pay a token of N300 per tire, and other times we buy from Oshodi markets, especially when we have to make a certain type of furniture or wall clock. For example, we use the waste power bike tires to make beautiful wall clocks.”