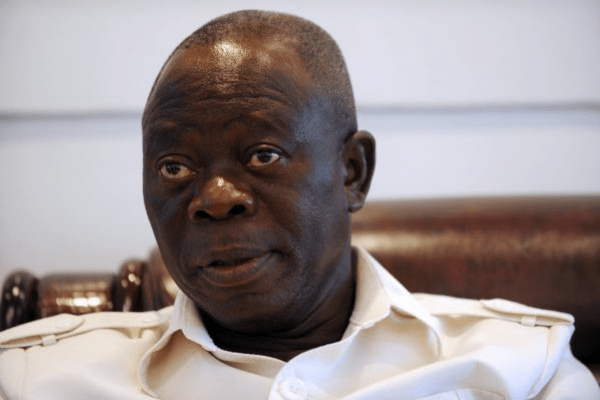 The Justice James Oyomire (rtd.)-led panel of inquiry report that indicted Adams Oshiomhole, the national chairman of All Progressives Congress (APC) on the construction and supply of equipment for the Edo Specialist Hospital has divided civil society groups in Edo state along Godwin Obaseki and Adams Oshiomhole camps.

The groups under the aegis of Alliance for Collective Progress (ACP) and Edo State Coalition For Good Governance and Internal Democracy in their separate protest in Benin City expressed divergent views on the panel report.

The state governor, Godwin Obaseki had January 2020 set up a panel of inquiry to investigate the construction and supply of equipment for the Edo Specialist Hospital by the Adams Oshiomhole-led administration.

The panel in its report last week indicted the administration of his predecessor for breach of the state’s Public Procurement Law.

While Alliance for Collective Progress called on the Economic and Financial Crime Commission (EFCC) to probe the administration of the former governor over the alleged fraud in the Edo Specialist hospital project, the Edo State Coalition For Good Governance and Internal Democracy described the panel as ultra vires as the matter is already before a competent court, lacks merit, diversionary, vindictive, unjust, unnecessary and callous.

The spokesperson for Alliance for Collective Progress, Nehemiah Omogiate, who led his members to a protest to the Benin Zonal office of Economic and Financial Crime Commission (EFCC), said the call become necessary following the indictment of the former governor by a judicial commission of Inquiry.

The protesters were armed with placards of various inscription such asq “Oshiomhole has been indicted, EFCC charge him, Edo people are saying EFCC act now among others.

Omogiate called on the EFCC to commence investigation the alleged financial crime in the construction and procurement of equipment in the hospital in the interest of justice and accountability.

“It was disheartening that the hospital was inaugurated with alleged borrowed equipment.

“We are here to register our grievance concerning the multi-billion naria Edo specialist hospital project, a project that president Muhammadu Buhari was deceived to inaugurate four years ago.

“We are aware that the panel of inquiry set up by governor Godwin Obaseki has submitted its report and in the report, the former governor of Edo state, Adam’s Oshiomhole administration was indicted.

“Up till now, EFCC has not done anything about it. So we are here to ask EFCC to act now because no one individual should be bigger than the law.

“That hospital was commissioned four years ago without equipment. We learnt that the report indicted the former governor for mobilising the contractor with 75 percent of the contract sum which exceeded the 25 percent mobilisation fees for contractors,”he said.

The Head of public Affairs EFCC Benin Zonal office, Williams Oseghale who received the protesters advised them to submit a written petition to EFCC for further action.

“I have heard you and I am going to take your massage back to the management but I advise that you also send us a written petition,” he stated.

However, Edo State Coalition For Good Governance and Internal Democracy at a press briefing at the secretariat of the Edo State Council of the Nigeria Union of Journalists (NUJ), alleged that the Certificate of completion, supply and installation of medical equipment at the hospital was issued in September 11, 2018, when governor Godwin Obaseki was already the governor of the state.

The spokesperson of the group Solomon Idiogbe, said the composition of the panel reflects an underhand motive geared towards indicting and demeaning Oshiomhole.

According to him, the constitution of the panel is not in all Intents and purposes in the best interest of the people of Edo state.

Idiogbe described as unfortunate Governor Obaseki’s desperation in humiliation of Oshiomhole’s as amounting to giving a dog a bad name in order to hang it.

He wondered why Obaseki failed to tell Edo people that the decision to pay the contractor 75 percent was taken by the state Executive council which he (Obaseki) was the head of the economic team.

“We make bold to say that the Judicial Commission of Inquiry set up by the governor lacks merit in all aspects. Far from the fact that the governor is an accomplice in the matter he is said to be investigating, the composition of the said panel set up by the governor reflects an under hand motive geared towards indicting and demeaning the social capital of Comrade Adams Oshiomhole.

“We implore the state government to desist, henceforth, from harassing decent sons and daughters of Edo state through spurious allegations and claims. We urge the governor to refrain from further attacks on Oshiomhole.

“The report of the panel could not find Comrade Adams Oshiomhole guilty of any form of aggrandizement but indicted him of mobilizing the contractor to site with 75 percent of the contract sum.

“The offence committed by Comrade Adams Oshiomhole is that he exceeded the 25 percent mobilization fees for contractors”,he added.