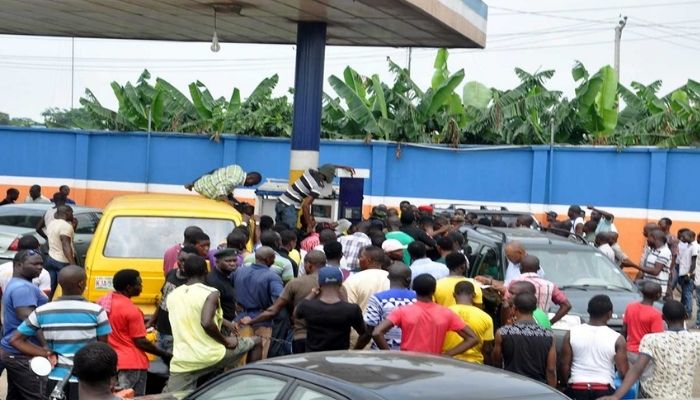 The lingering fuel scarcity has compounded the woes of millions of Nigerians struggling to survive the inflationary period as prices of items continue to make a rapid climb.

A litre of petrol in Lagos sells for as high as N250-N300 from N170 two months ago, choking cash-strapped Nigerians who are already grappling with high prices of goods and services.

The increase in fuel price adds to the cost of living of Nigerians which surged to a 17-year high of 21.09 percent in October this year.

Chidinma Irozuru, a trader, who lives in Badagry, told BusinessDay that her transport fare increased by N500 while commuting to work on Monday, November 28.

“Bus drivers were calling outrageous fares; the fare for each trip was doubled and their claim was they bought fuel for N300/litre due to the scarcity,” she said.

Another commuter urged the Federal Government to find a lasting solution to this “negative trend.”

“The challenge of fuel availability in the country needs to be rectified,” she said. “They should find a permanent solution to it.”

With the threat to shut down supplies by the Nigeria Union of Petroleum and Natural Gas Workers (NUPENG) due to rampant extortion, intimidation, and violent attacks by hoodlums on its members, Nigerians fear that the worst might be underway.

Petrol pump price has risen from the regulated price of N165 per litre to between N250 and N300 depending on filling stations and locations.

Public commuters aren’t the only ones affected, there’s been a surge in the prices of ride-hailing services like Uber and Bolt.

“The price of this ride-hailing service increased drastically this week because of the fuel scarcity. When I saw this, I opted for public transport, but even at that, I spent more than usual,” Bisola said.

Epileptic power supply also has pushed people to spend more of their disposable income on fuel, which is on the back of the rising fuel scarcity.

“The power supply has been epileptic in my area, so I’ve spent more on fuel this month because I have to fill my car tank and also fuel my generator to keep food in the refrigerator from perishing. I was charged an extra N1000 for buying in keg, all of which ate deep into my income this month,” Bode Olanipekun, an industrial chemist, told BusinessDay.

There’s also fear that the already bullish food inflation rate will skyrocket due to the hike in transport costs.

With a lot of Nigerians being entrepreneurs, fuel price increases the cost of doing business and cuts profitability.

Running costs are increasing and the profitability of many businesses is threatened.

@maestro2_ a Twitter account tweeted about the current situation saying, “The country is hard, business owners feel it, cost of production is increasing alongside the cost of living, the profitability of businesses is threatened, and the ease of doing business is also terrible.”