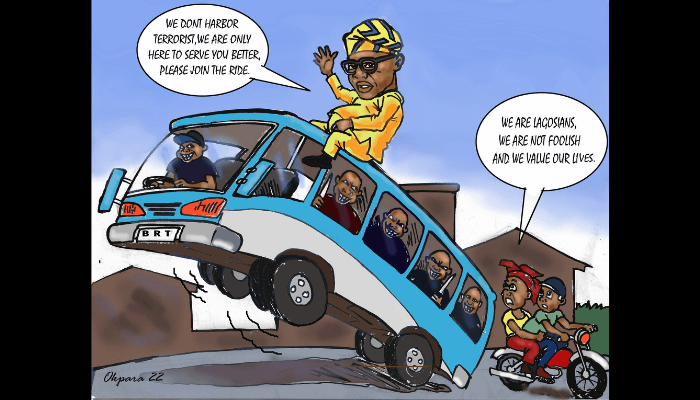 Atiku Abubakar, the presidential candidate of the Peoples Democratic Party (PDP), has linked the terrible economic situation of the country to poor leadership of the current government.

The former vice president said this during a private sector meeting he had with the Lagos Chambers of Commerce and Industry (LCCI) in Lagos. He addressed the audience presenting his blue print agenda for the sector and on how he can drive the economic growth for the nations’ ailing economy.

On the current economic woes of the country, the PDP presidential flagbearer linked the reactionary agendas of the current government to poor leadership.

“Ask me why these economic challenges have persisted and progressively worsen?” he asked.

“It has become fashionable for the APC-led government to blame opposition and external factors for Nigeria’s economic woes. The evidence however, is overwhelming that the country’s underperformance is largely attributed to leadership failures and mismanagement of the state,” he continued.

“The failure by the leadership of the APC-led government is steering every Nigerian in the face as the country’s economic, social and political and security challenges persists as it assumes frightening dimensions.

“An unprepared leadership fails to anticipate impending crisis and it is always slow to react. The fast policy document designed by this government, the economic recovery and growth improvement plan in 2017 was a reaction to the economic crisis in 2016 and not an initiative but a reaction.

“Similarly, the economic sustainability plan was a reaction to the COVID-19 induced economic crisis. Even this reaction was slow to come and economic recovery were perhaps

More on lack rather than on planned economic reforms.”

The African Development Bank (AfDB) has said that the continent of Africa is losing between 5 percent and 15 percent of its per capita economic growth due to the effect of worsen climatic change.

The bank said that as a result of this development, the continent is facing a “gaping climate finance shortfall”.

The continent is facing severe economic challenges brought about by flooding, droughts, cyclones and other environmental challenges more persistent this year.

According to Kevin Urama, the acting chief economist of AfDB, in a statement released on Tuesday, African nations received around $18.3 billion in climate finance between 2016 and 2019.

“These sums reflect how the crisis is,” Urama said. “Investing in climate adaptation in the context of sustainable development is the best way to cope with the climate change impacts.”

According to Reuters, rich nations promised in 2009 to deliver $100 billion in climate financing to the developing world. But that pledge has only ever been partially met and is due to expire in 2025.

African ministers meeting in Cairo last week ahead of November’s COP27 climate summit decried the lack of support which they said had resulted in the continent benefiting from less than 5.5% of global climate financing. The statement concluded.

As diplomatic relations worsen between the United States and China, the U.S. is planning to impose more sanctions on China to discourage it from invading Taiwan.

According to Reuters, a reliable source said that there were ongoing deliberations in Washington and Taipei’s over the issue including separate lobbying of EU envoys.

A reaction which is coming at the back of China’s recent military threats and drills at the Pacific Ocean.

Reuters reported that the idea is to take sanctions beyond measures already taken in the West to restrict some trade and investment with China in sensitive technologies like computer chips and telecoms equipment.

The sources did not provide any details of what is being considered but the notion of sanctions on the world’s second-largest economy and one of the global supply chain’s biggest links raises questions of feasibility.

“The potential imposition of sanctions on China is a far more complex exercise than sanctions on Russia, given U.S. and allies’ extensive entanglement with the Chinese economy,” said Nazak Nikakhtar, a former senior U.S. Commerce Department official.

Queen’s final trip is most tracked flight in history

According to the BBC, over 5 million people viewed Queen Elizabeth’s final flight on Tuesday, as the journey carrying the late British monarch’s body from Edinburgh to London became the most tracked flight in history.

The company said an unprecedented 6 million people tried to follow the flight within the first minute of the Boeing C17A Globemaster turning on its transponder at Edinburgh’s airport, affecting the stability of the platform.

“Seventy years after her first flight as Queen aboard the BOAC Argonaut ‘Atalanta,’ Queen Elizabeth II’s final flight is the most tracked flight in Flightradar24 history,” Flightradar24 Director of Communications said in an email.

The Queen’s lie in state is scheduled for September 19, in London.

In the star match of Tuesday night, Bayern Munich kept their recent good record against FC Barcelona in the UEFA Champions League with a 2-0 win at the Allianz Arena on Tuesday.h

The German champions did so with two goals in the second half.

Lewandowski, who left the Bavarians to join the Spanish side this season, had some big chances during the game but was however wasteful in front of goal.

Despite his towering presence and clear-cut chances, the polish record scorer could not avoid FC Barcelona’s fifth defeat to Bayern Munich in their last five clashes.

Liverpool, meanwhile, laboured to a narrow victory over Ajax Amsterdam. Securing their first three points in the competition after Joel Matip’s late header sealed a 2-1 home win over the Dutch soccer power house.

Jesper Lindstrøm secured Eintracht Frankfurt a 1-0 win at Olympique Marseille, while Robert Andrich and Moussa Diaby made it 2-0 for Bayer Leverkusen against Atletico Madrid.

Group D leaders Sporting Lisbon, meanwhile, made it two wins out of two games with a late 2-0 victory over Tottenham.

Both goalkeepers had a bright evening and the game was set to end in a goalless draw, before Paulinho broke the deadlock in the 90th minute.

FC Porto, however, were surprised by Group B leaders Club Brugge, who cruised to a 4-0 triumph at the Estadio do Dragao.

Brugge equalled their biggest UEFA Champions League win and became the first Belgian side to start a group campaign with back-to-back wins.