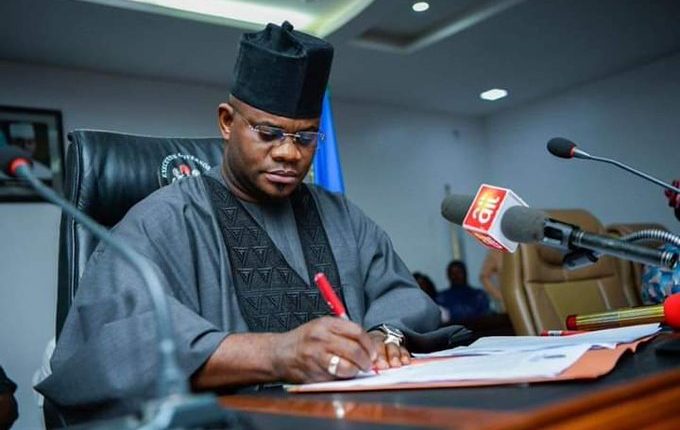 Share
A Federal High Court, sitting in Abuja, Friday, adjourned to January 20, 2020, to give judgment on the case brought by Kogi state governorship candidate of the Social Democratic Party, Natasha Apoti against Governor Yahaya Bello over alleged double registration.
Justice Inyang Ekwo fixed the date after parties in the matter adopted their briefs of argument.
Apoti, through her counsel, Mike Ozekhome (SAN), is seeking the disqualification of Bello in the November 16 governorship election in the state on the grounds that he was not qualified to contest the election on account of double registration.
The All Progressives Congress (APC), the Independent National Electoral Commission (INEC) and Bello are the 1st – 3rd defendants in the matter.
In his submission, Ozekhome (SAN), prayed the court to make a consequential order that Bello was not qualified to have contested the election having registered in both Abuja and Lokoja, the capital city of Kogi, an offence against Section 24 of the Electoral Act.
According to Ozekhome, the case is not a pre-election matter that requires a time limit to file but a case of fraud, which could be filed anytime.
He submitted that the 2nd defendant, INEC already admitted it committed an error to have registered Bello twice but according to Ozekhome, INEC said its hands were tied to do anything now because of the governor’s immunity.
“INEC has said on television that it committed a grave error by registering him (Bello) twice in Abuja and Lokoja, saying if not for immunity, they would have moved against him.”
Ozekhome insisted that when fraud is involved, as the instant case, the time of filing is not an issue.
Counsel to the 1st defendant (APC),  Abdulwahab Mohammed, however, urged the court to dismiss the suit, while questioning the competence of the court to entertain the matter.
He said it was a pre-election issue, which is staled because the time allowed to file a pre-election matter has already elapsed.
He argued further: “The electoral act is very clear on this, only a person who has been convicted that cannot stand election. Bello has not been convicted, he is not on trial, the case is only an academic exercise. I urged my Lord to dismiss the suit.”
In his submission, counsel to the 2nd defendant – INEC – Al Hassan Umar (SAN), argued along the same line, stating the cause of action, is 14 Oct 2019, by the provision of Section 285(9) of the Electoral Act, the time to file the suit has elapsed. He said INEC was also challenging the jurisdiction of the court to entertain the matter, saying the 3rd defendant has not been charged or convicted to warrant being disallowed to contest an election.
He submitted further that mere suspicion of alleged double registration or an offence “bordering on fraud was not enough to disqualify anyone through administrative tribunal”
He urged the court to dismiss the suit.
U. Abdullahi, who represented Bello,  challenged the competence of the plaintiff to file the case. He said there were documents from the plaintiff to prove that the Bello registered twice.
“He was not in the country when he was alleged to have carried out the double registration. He was not in the country between May 13 – 18, to have registered twice as being alleged.”
He further submitted that the suit cannot come through originating summon in the case of fraud but only through a writ of summon.
He, therefore, urged the court to dismiss the case in its entirety and award cost against the plaintiff for wasting the time of the court and counsel.
Consequently, Justice Ekwo adjourned to January 20, 2020, for judgment.

Make the most of festive outing at Radisson Blu Ikeja