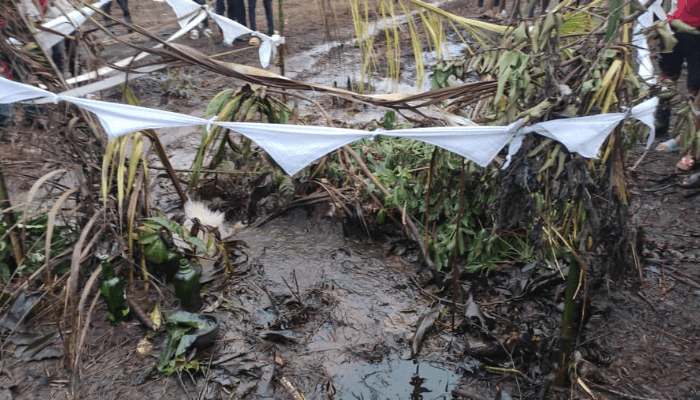 The site where the third spill has occurred in Bodo area of Ogoni in Rivers State seems to brew danger and crisis between SPDC and the Bodo community. The spills were reported in batches between August 2, 2022 and August 24, 2022.

Community sources said the spills were massive but SPDC management responding on the matter said it was yet to access the site in Ghokana local council area to ascertain the magnitude.

Multiple sources told BusinessDay the first spill had water and oil but that the latest one is oil only. The spill occurred along the highly ravaged Trans Niger Pipeline (TNP) capable of delivering 180,000 bpd which was denied crude oil for months due to vandalism and illegal refining, hurting Nigeria’s export targets and foreign exchange earnings.

Spokesman for Shell had said week ago; “We are working with regulators and local community to investigate the reported incident. The TNP is undergoing tests with water main flushing after injections stopped in mid-June 2022 owing to constant breaches by crude oil thieves.”

More than a week after, the sites have remained under siege by community people who are seen cooking, eating and sleeping there on shift bases at a site that is volatile and dangerous to health.

The cause of the multiple spills had been under speculation as third party breaches have ranged over 90 per cent in recent times, but a driver plying Ogoni to Port Harcourt but who hails from Bodo said the site is right in the community where no bunkering team could have set camp.

“It is equipment failure”, he asserted.
The magnitude has also been under speculation but the villagers insist it is massive, even as they have not allowed experts to come and do checks.

The latest spill, according to an oil spill monitoring group, Youth and Environment Advocacy Centre (YEAC), headed by Fyneface Dumnamene Fyneface, which has been monitoring the situation, said in a statement that a team under the auspices of “One Million Youth Volunteers Network of Human Rights Defenders and Promoters in the Niger Delta” reported that the new spill occurred in Bodo in the late evening of Wednesday, August 24, 2022.

This new spill is the second in the month of August 2022 alone after there was a spill also reported by Advocacy Centre on August 2, YEAC stated.

The group said the August 2, 2022 oil spill was from Shell’s facility but that the standards of measurement were not known. The source said Shell accepted responsibility as equipment failure and that discussion for compensation was going on. Shell admitted that discussions were going on but it was to gain access to asses the site.

While state was on, new spill was reported to YEAC. SPDC said it was trying to get the joint inspection team to act.
YEAC had called on the National Oil Spill Detection and Response Agency (NOSDRA), SPDC and other relevant authorities to immediately mobilize for a consultative meeting with the community leadership, carry out a well-representative Joint Investigation (JIV) visit that should include the media, NGOs and other relevant stakeholders to determine and confirm the cause of the spill and then take appropriate steps to clamp the spill point, clean up the environment and pay adequate compensation to members of the community that have been impacted by the oil spill.

YEAC team that went on September 1, 2022 to monitor crude oil spill in Bodo for yet another one that occurred on August 30 on the TNP that passed through the community to Bonny Export Terminal where Nigeria exports its crude oil to the international community.

YEAC said the latest spill occurred at the same spot where there was an oil spill on August 24, 2022 but it was yet to be clamped by Shell as discussion was still ongoing with the community people for access to site to be granted.

The villages said they were waiting for them to come back and engage them for clean up compensation. Advocacy Centre said it observed that over a thousand community people were at the site keep watch and exchanging themselves.

“They have canopies set up to provide shed from rain and high sun. YEAC-Nigeria also saw cooking utensils which implies that the community people stay there, cook and eat as they keep watch over the spill point.

“YEAC-Nigeria could still see the crude mixed with water ‘boiling’ from the ground at the spill point where community people have used sticks and pal-fronts to tie round it. The environs of many living house around the spill point is polluted, cassava, yam and other crops planted in farms around the area are devastated by the spill with very stern unbearable ordour that chokes in the area.”

YEAC recalled that in 2008 and 2009, there were oil spills in Bodo community leading to a case in a London high court and for which Shell opted for out of court settlement and 55 million Pounds was paid to the community in compensation with a component for environmental remediation which is still ongoing but new spills are being added to the existing ones.

Experts at the University of Port Harcourt Teaching Hospital (UPTH) presently headed a professor, Henry Ugboma, have created awareness on increasing incidence of nasopharyngeal carcinoma (cancer of the through, ear, nose) in the oil region.

Last week, at the Hospital Round Ground, the chairman, Medical Advisory Committee (CMAC), a professor, Lucky Onotai, told newsmen that nasopharyngeal cancer had ethological factors which include undue exposure to chemicals. “You know in this our environment, we have a lot of petrochemicals, gas flaring, petroleum products being refined and pumped into the atmosphere by unauthorized persons and in unapproved methods.

“When you come in contact with these, you can be exposed.”

On way out, he said; “These areas where they refine petroleum, we can reach out to them through the media plus door-to-door campaigns to let them know the dangers they face.

“Ogoni axis where were many oil spills should be cleaned and well treated. Those that plant crops in those places should be told that they are at risk.’

Yet, the community people who say the area is full of stench is living and eating there to ‘protect’ the sites that may become golden soon going by the $55m they recently enjoyed.

A Shell manager said few weeks ago that communities in the oil region now fight over who ‘owns’ a spill site because of the lucrative outcome. The ‘owners’ of the land area will insist on being those to be employed to clean it and those to share the compensation.

This seems to make any nearby community to even dig trenches at night to allow the spill get to their own communities.

For now, the Bodo community is inhaling its poisonous but profitable liquid.